So, as I was saying yesterday, Michael Adams is probably not that used to playing for a win with the Black pieces. Well, it seems Mickey fancied showing me up - as if I'm not used to predictions going wrong - and he turned over Robert Eames in 21 moves. Sadly for lovers of all things old fashioned White's King's Gambit didn't work out quite as well as it did for Simon Williams against David Howell in Torquay last year.

The Ginger GM also began with a win but unfortunately our other recent interviewee Keith Arkell lost rather quickly. I haven't seen the game score yet but there's a note on the tournament website that suggests that a queen might have been left en prise. Hopefully, Keith will have better luck in round two but in the meantime he can perhaps console himself with the thought that if you have to lose then perhaps it might as well be to one of the S&BC Blog's regular visitors. 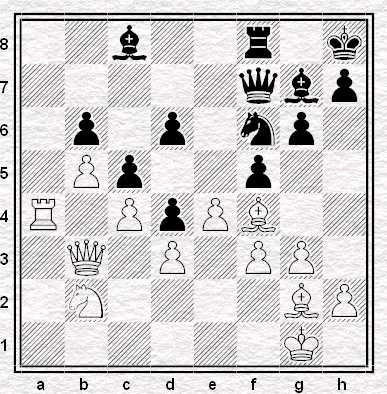 Black to play
Griffiths-Williams, Canterbury 2010
White, having just played 26. Bd2-f4, has walked into something nasty

Fans of tardy Grandmasters will be pleased to note that both of the tournament's late entrants kicked-off with a win - Gormally beat one R. Maciol with Black and Nick Pert defeated Richard McMichael with White. By the time the latter game was over I had discovered that Andy Martin's on-the-spot commentary was being streamed live (thanks to Eoin Devane at the EC Forum for the tip) and I was fortunate to start watching just as the victorious GM starting explaining the game. It seems he felt White was in some bother for quite a long time which is cheery news for Dutch enthusiasts of whatever hue (this one was a Stonewall) even though Black went down in the end.

Talking about Pert and Gormally, their late arrival not only beefed up the top end of the tournament it also raised the total number of entrants to the championship tournament to 78. That's up a couple on Torquay, 10 higher than 2008 and well above the average since 2000 (71.8).

Actually, since we're talking numbers, have a look at how things have changed over the past forty years.

[NB: Figures above derived from Chessbase up to 2003 and Britbase thereafter. They may not be particularly accurate - e.g. 1996 looks rathe low & my copy of Chess Monthly Oct 1989 says 78 people played in Plymouth that year not 77 - but the broad story of increasing numbers should hold true even if for individual years are out by one or two]

Yes, there have been some interesting peaks and troughs along the way but it's clear that the average number of entrants has been rising steadily across the decades. In fact, as you can see, the tournament has grown to double the size that it was in the early 1970s. 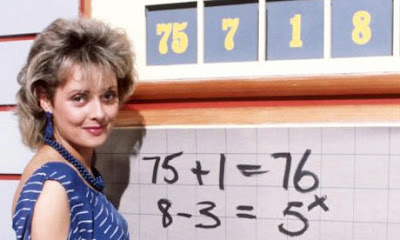 This is a good thing right? For the two-week jamboree as a whole the more the merrier but for the Championship itself? Aside from all those entrance fees, which are no doubt most welcome to the organisers, I just don't believe that bigger is better. I'll get back to precisely why later in the week, in the meantime suffice to say that:-

Back in the 1970s, the field was restricted to about 32 players. There were always "weak" players that sneaked through the qualification system to the exclusion of others with a better claim. With the expansion of chess that took place in the 1970s, you needed a larger field because of the increased number of players with a legitimate case for participation. There hasn't been an upper limit on the numbers for at least thirty years. The size of the tournament is limited by finance (when it exists) to invite GMs and IMs and by the softness of the qualification rules. This year's entry is down to soft qualification rules as much as anything else - but many * £200 is needed as there's no (official) money for GMs and IMs. The ECF is both short of money and had £15000 lopped off its income by a reduction in the DCMS annual grant.

Thanks for your contribution MOP,

there's no (official) money for GMs and IMs?

... you needed a larger field because of the increased number of players with a legitimate case for participation


I'll be back, probably on Thursday, to suggest that while all those involved in the current British Championship have a 'legitimate case for participation' in the championships as a whole it's no so clear to me that they really belong in a Championship tournament.

That one depends on what you want your championship tournament to be doing I suppose.

The ECF had no money to guarantee expenses for GMs and IMs. It's believed that some of the participating GMs have finance from "private" (ie non-ECF) sources. Keith A has thanked one of his clubs for their help.

If you give the right to all British GMs and IMs to play you could get over 60 playing if they all turned up. If you also award places in the British Championship as prizes in other events, then you will get a few more players. So a limit of 32 as was the case 35-40 years ago is too few.

For many players, the British proper is a bad tournament for meeting GMs/IMs (I've played just 1 in 44 games). There again scoring a point or two helps.

Having just played a major Continental open in which nine out of ten of my opponents were not only lower ranked but more than 100 points lower ranked than me, I do know what you mean. 0/2 as a start doesn't get you many GMs.

Oh, I see what you mean. I thought you might have been suggesting that the ECF had found a way to give some benefits to the GMs without officially giving them some dosh.

See here for some earlier thoughts on private expenses arrangements.

Given what you say I'm not sure I'd agree that a 32 place limit would be too small - but anyway if were emperor (and had access to a magical pot of money) I think I'd be tempted to limit the field for the Championship Tournament by qualification standard rather than setting an arbitrary number for the number of players I'd let in.

The advantage of limiting the field for the Championship Tournament, of course, would be to strengthen the major open which seems to have taken a bit of a dive over the years.