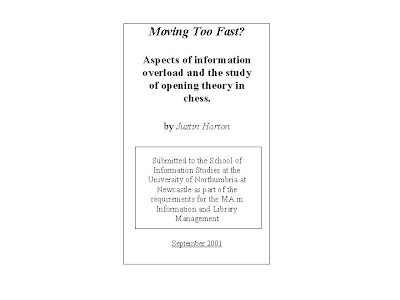 In 2001 the British Championships were held in Scarborough, the second of three times in six years that they took place there. On the third occasion, I went for a week and played in a side-tournament: the second time I only visited, having neither the time nor the money to take part. My deficit in these two qualities had a common root - I was a postgraduate student, trying to eke out both his remaining cash and his remaining weeks of the summer vacation to try and finish his thesis. And, of course, to start it.

Originally I had proposed to write on a subject nothing to do with chess. Having on at least one occasion, when working in a library on an issue desk, issued Mein Kampf to a reader, I'd thought of investigating the ethical and legal problems involved in libraries holding and issuing - or not - that book. I dropped the idea, though, since on reflection it seemed to me that this turf must have been trodden many times before.

So rather than regurgitate other people's research in a project anybody else could do, I preferred to find something to research that nobody else had touched before and nobody else was likely to be doing. Librarianship having, not with my approval, long since morphed into something called Information And Library Management, the possible range of topics was much widened, given that almost everything involves Information at one level or another. Thus it was that a librarian's thesis involving the issue of library books became an information professional's thesis involving opening theory in chess.

Having said so much, I don't propose to say very much more about it here. I might do so some other time. It's not a brilliant thesis. It's OK, it's not entirely pedestrian and it's as original as I'd intended it to be, since in researching the thesis I could find almost no other academic work relating to my particular field. But it's a thesis for a vocational MA, it took a few weeks to write and it fell short (one percentage point short, as it goes) of gaining a Distinction. It's not one of those PhD theses which is years in the creation and which forms the basis for a brilliant intellectual career. (It is also, to tell the truth, poorly produced, with several errors in the text that would have been spotted and removed had I had more time to spot them and more than three quid left in the world, by the time I handed it in, to divide between reprinting and eating.)

It's the fact of the thesis, more than the thesis itself, that may be of interest during this fortnight. Because, in order to research the impact of the information revolution on chessplayers, I needed some real, actual players to tell me how it had affected them and whether or not they thought this was for the better. So, as the Championships were in Scarborough that year and as that town is relatively close to Newcastle, where I was studying, I went down to Yorkshire, with a very large number of envelopes in my bag, each containing a questionnaire and a stamped addressed envelope, and I left them on the Championship boards before the start of play, with an explanatory note. 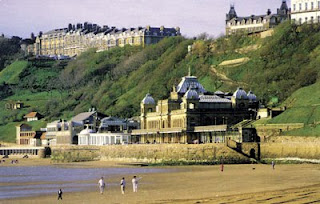 It was packed, honest

Thankfully, I received a number of responses, for which I will always be grateful, and without which I could not have written any thesis. The sample wasn't huge - thirteen responses, if I recall, though a few more arrived a little too late for inclusion. Then again I wasn't carrying out a medical trial, I was beginning some provisional research in a sociological field, and the size of the sample wasn't very important provided it was recognised. It was enough, and it was interesting.

So interesting, that I'm not going to tell you much more about it. Well, perhaps I may do so in the future, here or in another place. I've meant to do so for years. In truth I meant to do so ever since the questionnaire was first conceived of, by which time I was already writing for Kingpin. As with so many other things, I have never got around to it. It was not the least turbulent period of my life and I changed address sufficiently often that much of my stuff, including the questionnaires and all the other documentation pertaining to the thesis, never left my packing-boxes. (I would want to refer to them, rather than just the thesis itself, not least because of the questionnaires that arrived late. They were no less interesting and valuable for that.)

I don't think the nine years that have passed are so important. Certainly it seems to me that much more changed between, say, 1991 and 2001 than it has between 2001 and 2010. The materials we use today to study developments in opening theory are not very different to those which we were using then, nor is the torrent of fresh information much more overwhelming now. Though I'd be interested in contrary opinions, I think the fundamental changes mostly happened in the decade before 2001, not the one after - from card indexes to computer files, from human analysis to computer-led analysis, from individual research in chess magazines to sortable and downloadable game scores available to all and hence from information scarcity to information overload.

Another day. A lot of interesting things were said. But what I can tell you, in brief, is that the amateurs who responded were a lot more fond of the information revolution than were the professionals. For the former, it meant access to information that they'd never had before. For the latter, those for whom chess is primarily work, it meant the need to access more information, since all their rivals had access to it as well - and hence more work, just to stay in the same place vis-à-vis their peers.

Which, I suggested, might be true of information technology in the wider world. It's wonderful as a tool. It's life-enhancing where we are in control of it. But in the world of work, its major effect is to make the treadmill turn faster than it did before.

Ironically, having written this thesis, I probably understand less about information technology in chess than most other chessplayers. I can just about click on Analyse and that's your lot. I downloaded ChessBaseLight a few months ago. I still have no idea how to use it.

In that, I'm far from unique. But - and this is really the point of today's piece - am I the only person who has ever written a university thesis using the British Chess Championships as the basis for their research? Am I unique in that?

[Thaks to Sean and Jonathan for their help with this.]
Posted by ejh at 7:55 am

My guess is an ethnography of the British Chess Championships is your only plausible rival... innaresting that pro's don't welcome extra work tools. English pro's, I guess.

By no means all of them, actually. I can't and won't reveal names because anonymity was promised to all respondents, but some replies were from either non-English competitors or people to whom it had been forwarded out of interest.

The point is though, there's a vast difference between the impact of something which you have the choice to use out of recreational or intellectual interest, and something which you're going to have to use, like it or not, because if you don't you'll suffer compared to your professional competitors. I don't think that in this respect, the experiences of English professional chess players would be substantially different to many other professional groupings.

One example familiar to most of us. Email is a great tool for getting in touch with your friends and family - far quicker and hence generally superior to the post. However, in a work situation it means that whereas sending a letter would have got something off your desk until you got a reply some days later, now the response puts it back on your desk in a few minutes. This has virtues, it means that problems can be dealt with more quickly, but it does have the tendency to mean that you're just expected to deal with more things, more quickly, than was previously the case.

I think things have changed a lot in the last 10 years in that engines are now significantly stronger than in 2001. Last week I played 4 players rated 2500+ in a tournament and had reasonable if not better positions out of the opening in all 4 games. OK, it took a lot of preparation, but 10 years ago, the tools did not exist to the same degree.
I know that already in 1990, I was using ChessBase for the assembly of information in much the same way as I am today. The main change was in the 1980s - others will recall me arriving at tournaments with up to 30 copies of Informators. The data was there but it took a bit longer to process.
And no, I don't know of anyone writing a university thesis using the British Chess Championships as the basis for their research. I do however know of people using questionnaires as a basis for holding the Championships in Sheffield next year, but after last week my views have changed!

So where can I get a copy of your thesis?

Well, it's not generally available (if I recall rightly, had it been awarded one percentage point more it would be in the UNN library, but it didn't, so it isn't). I might be persuaded to email it.

Interesting post. Your thesis hypothesis certainly deserves testing. I suspect chess player professionals, being supreme game players, are not representative of professionals in general. I am reminded of a previous posting of mine here which looks at rationality & chessplayers.

One of the greatest modern tools we now have is the world wide web, which started out as a way to share and update information among researchers. I think a lot of scientists don't equate the science they do as work. Writing grant applications, however, is a different issue altogether!

Richard Feynman for example took great pleasure in finding things out. He was daunted only by poor quality information, in particular he was very dismayed by the quality of the science textbooks available at the time.

Maybe there is an issue for a professional if you have to sort through a great deal of poor quality information. Time equals money.

I enjoy reading your posts.