TISE (not TIFE) is a post I've been trying to get around to writing for about three or four months now. Ever since I wrote One for Tom, a post based on a fine attacking game by Jacob Aagaard, I, like T.C., have become increasingly obsessed with exchange sacrifices.

Since June I've written a few posts on the theme of giving up a rook for a minor piece. There was RCP VI (Raymondo giving up material to grab the light-squares); RCP VII (which included the game Wade-RDK, a battle which contained a defensive exchange sac that helped our hero with the British Championship); A Collection of Dutch bits and bobs (two sacs from Simon Williams' DVD The Killer Dutch); and I was planning a post on Petrosian's wonderful sac against Reshevsky from Zurich 1953 too but EJH got there before me (My favourite moves XII).

The more I look for them, the more I discover there are so many different kinds of exchange sacrifice. Perhaps, like eskimos finding the need for a gazillion different words for snow, chess players should invent a few new terms to be able to distinguish between the various ways exchanges can be given up.

Shirov-Bareev, Lvov Zonal 1990 features two very different exchange sacrifices from the (then) Latvian soon-to-be SuperGM. Dissimilar, but both archetypes; both good examples of a certain kind of exchange sacrifice.

In his comments for Grandmaster Video, Shirov says that he'd originally intended 13. Rc1 but then came to believe that it wouldn't give him any advantage. This was a game he had to win, so he chose instead to mix things up by giving up a rook to get Black's powerful bishop off of the board.

Obviously, 13. Nf3 is a purely positional sacrifice. Shirov has no intention of regaining the material in the foreseeable future, nor is he gaining chances to attack Bareev's king. It's a funny kind of sacrifice in that it only takes a glance to see that there will definitely be compensation based around White's dark-square play and Black's draughty king, but judging whether there will be enough is fiendishly difficult (impossible, actually, if you're me). 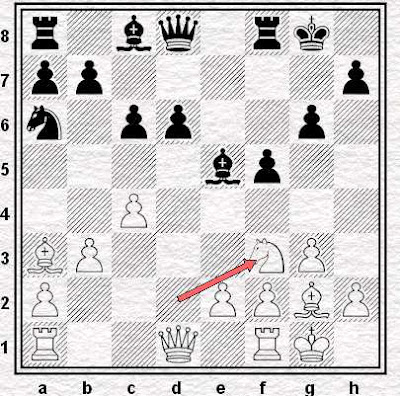 
Twenty moves later Shirov gives up rook for bishop a second time, or would have done had Bareev not declined the material (with a counter exchange sac, no less). 33. ... Kxe6 would have led to a position in which Black was two exchanges for two pawns ahead, but he spurned the sacrifice because of a specific tactical sequence that would have led to immediate disaster.

Two very different kinds of exchange sacrifice, then. The first is a question of judgement: a decision informed by variations, perhaps, but ultimately the kind of move you make without knowing for sure exactly how the game will go. The second, however, has a concrete solution: 'if he takes the rook with his king then x, y and z follows and I win'.

That's the theory, anyway. I didn't fully understand the positional judgement behind the first ex sac and I couldn't find the winning line for White after 33. Rxe6 Kxe6 either. I'm sure, however, the S&BC Blog readership can do better. 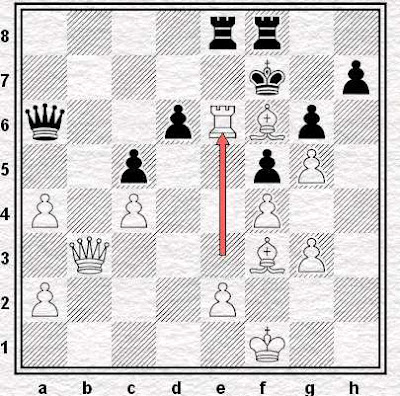 I got the immediate follow up to 33...Kxe6 right, but then missed the second move, and had to ask Rybka :(

I've never played a positional exchange sacrifice in a game - it definitely seems to be a mark of advanced positional understanding. I once played a club game as black against a player who wasn't highly graded, but was one of those wily club players you suspect might have been graded a lot higher at some point. The game began: 1.e4 d5
2.exd5 Nf6 3.Bb5 Bd7 4.Bc4 b5 5.Bb3 a5 6.a4 bxa4 7.Rxa4!? Bxa4 8.Bxa4 Nbd7 9. Bc6
I don't think his exchange sac necessarily put him in a better position, but I found it a very unpleasant position to play and he went on to win.

Adam is right: Bb7 is the key idea.

Rybka thinks white is better in your sequence Chris!