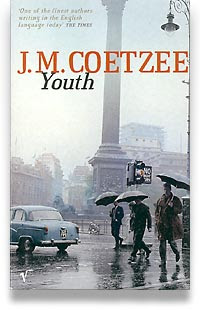 Now that the words are out they sound stupid, and they are stupid. He is being manoeuvred into saying stupid things. But he should have expected that. That is how they will make him pay for rejecting them and the job they have given him, a job with IBM, the market leader. Like a beginner in chess, pushed into corners and mated in ten moves, in eight moves, in seven moves.

Autumn turns to winter, he is barely aware of it. He is no longer reading poetry. Instead he reads books on chess, follows grandmaster games, does the chess problems in the Observer. He sleeps badly; sometimes he dreams about programming. It is a development within himself that he watches with detached interest. Will he become like those scientists whose brains solve problems while they sleep?

There is another thing he notices. He has stopped yearning. The quest for the mysterious, beautiful stranger who will set free the passion within him no longer preoccupies him. In part, no doubt, that is because Bracknell offers nothing to match the parade of girls in London. But he cannot help seeing a connection between the end of yearning and the end of poetry. Does it mean he is growing up? Is that what growing up amounts to: growing out of yearning, of passion, of all intensities of the soul?

The people among whom he works - men, without exception - are more interesting than the people at IBM: more lively, and perhaps cleverer too, in a way he can understand, a way that is much like being clever at school. They have lunch together in the canteen of the Manor House. There is no nonsense about the food they are served; fish and chips, bangers and mash, toad in the hole, bubble and squeak, rhubarb tart with ice cream. He likes the food, has two helpings if he can, makes it the main meal of the day. In the evenings, at home (if that is what they are now, his rooms at the Arkwrights'), he does not bother to cook, simply eats breed and cheese over the chessboard.

Ganapathy is the first Indian he has known more than casually, if this can be called knowing - chess games and conversations comparing England unfavourably with America, plus the one surprise visit to Ganapathy's flat. Conversation would not doubt improve if Ganapathy were an intellectual instead of being just clever. It continues to astound him that people can be as clever as people are in the computer industry, yet have no outside interests beyond cars and house prices. He had thought it was just the notorious philistinism of the English middle class manifesting itself, but Ganapathy is no better.

Is this indifference to the world a consequence of too much intercourse with machines that give the appearance of thinking? How would he fare if one day he was to quit the computer industry and rejoin civilised society? After spending his best energies for so long on games with machines, would he be able to hold his own in conversation? Is there anything he would have gained from years with computers? Would he not at least have learned to think logically? Would logic not by then have become his second nature?

He would like to believe so, but he cannot. Finally he has no respect for any version of thinking that can be embodied in a computer's circuitry. The more he has to do with computing, the more it seems to him like chess: a tight little world defined by made-up rules, one that sucks in boys of a certain susceptible temperament and turns them half-crazy, as he is half-crazy, so that all the time they deludedly think that they are playing the game, the game is in fact playing them.

It is raining. He and Ganapathy are alone in the canteen, playing lightning chess on Ganapathy's pocket set. Ganapathy is beating him, as usual.

[A Literary Reference index]
[Thanks to Tom]
Posted by ejh at 10:05 am