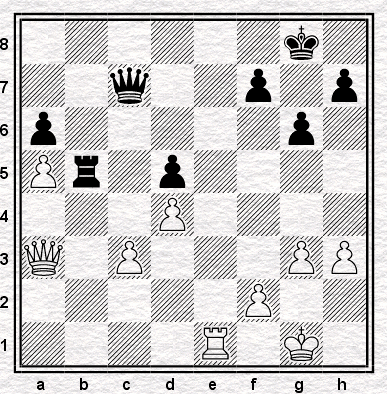 The board one game was drawn, and as a result, White moved into the outright lead, half a point ahead. If I win my final game, due to be played next Saturday, I will be the champion of the province of Huesca.

This was a championship I failed to win last year, despite being graded more than a hundred and fifty points higher than any of the other competitors, and as a result, I completed sixteen years without winning a tournament. And now, in the seventeeth year, I am so close. One more game. With the black pieces, against a player who beat me last time we played: yet he is a player I should beat. But we are five days before the game and should is a million miles from will.

I have, I think, two goals in chess. One is to beat an International Master, which I have never yet managed to do. The other is to win another tournament. And then, or so I tell myself, I can stop taking the game so seriously. I hope so. I don't think I can go through this again.

The tournament, being played over nine rounds, but only one round a week, takes eight weeks to complete. I work, during the week, in different parts of Spain: already, during the current tournament, I have been to Ciudad Rodrigo on the Portuguese border, to Pamplona near the French, to Cartagena on the Mediterranean. At the end of every week, I travel hundreds of kilometres back to Huesca, to play in the championship. Every Saturday, when I am back, I go and play another must-win game. And the following week, I stress myself to distraction, worrying about the next Saturday's must-win game.

Never again. After this, either I play this tournment for fun, or I don't play it at all.

No, really. I don't want to be the guy who plays the same tournament for twenty years and never wins it. This is my fourth attempt: I've so far come third twice and second the other time. Saturday, I think, is it. It, as in the end. It, as in the moment of truth, the showdown, the final scene.

There is so much I could say about this. But for the while, it is better unsaid. I shall be in Teruel this week, worrying. And then, on Saturday, I shall be pushing a few pieces of plastic around a table. Pushing them around, inside my head.
Posted by ejh at 7:55 am

Best of luck Justin! Does the draw give you the title as well? I find that a long drawn out tournament holds much more significance than it would otherwise merit. The Watford club championship is a very important tournament for me as it is spread out over the entire season (7 rounds at 5 week intervals). By the last round you are so afraid of messing it up and tarnishing any memories you have built up from the previous games over the course of the year. If it was just a weekend or 2 club evenings it would be much different. At least yours is only over 8 weeks, even if there are two more rounds.
Andrew

Does the draw give you the title as well?

There are two tiebreak systems, amended Bucholz (i.e. sum of opponents' scores minus the two worst) and sum-of-progressive-scores. There is a draw after the last round to decide which one has priority.

if I were to draw in the last round and my teammate Jorge were to win, putting us level, I would win on progressive scores. However, at the moment, I am behind on the other system, partly because my third round opponent has had a nightmare tournament (he's on 3.5/8 - last year he scored 7/9 and came first!). That said, I think that if the relevant games in the final round go according to rating, I would actually catch up and thereby win the tournament.

But of course I can't rely on that happening, so I have to try to win. Which leaves open the entirely plausible scenario that I might try too hard to win, lose the game - and then find out that a draw would have made me champion.....

Good luck Justin!
Why do they operate such a complex tie-break system?

I would be tempted to draw and take my chances with the tiebreak system that was in my favour. That said when you do this it always seems to work the other way to punish you. On the other hand this probably suffers from observational bias and/or egocentrity (and paranoia) in that the Gods of Fate regard you as both so important and additionally they don't like you that they put all their energies into screwing you over on the bucholz system.
Andrew

Adam - I don't know why they introduced the tiebreak system they use, but I'd suspect it was to avert, as far as possible, a situation were the leader after eight rounds could just take a draw knowing that if he or she did so, the title was theirs! Which of course is precisely what I'd like to do.