New In Chess has one too many

What has got into New In Chess of late?

In their issue 2010#5, as already discussed here, they thought it would be a good idea to run a piece by Nigel Short chuckling about sex tourism. That was crass enough.

In their issue 2010#7, however, they took several steps deeper into the muck by publishing an article, A Tale Of Two Swamps, by "Bermuda's non-playing captain" Graham Hillyard, that should have stayed in whichever of the swamps it was dragged up from. Or in the saloon bar, which is where the piece gave every sign of having been written, and is where its opinions can very often be found.

It's a long and tedious article, much like a pub bore's anecdote, and I was already in skimming mode when I read the following, which made me stop, go back and read again:

He [CJ de Mooi - ejh] sat in the bar of the Olimpskaya expressing disappointment at the way things were going. "Karpov knew my requirements," he said, scanning the faces around him dejectedly. He had been hoping to meet some attractive young Russian men in the course of his visit, but Karpov had not shown his gratitude by organising any introductions, and CJ was now reduced to attempts at making his own arrangements.

There's more of this in the following paragraph, but you already get the drift. Don't you, squire? Nudge nudge, wink wink. Say no more.
Indeed, it would have been better for Mr Hillyard to say no more. But more, he unfortunately said, and less subtly than the passage quoted above.
A couple of paragraphs above, we learn that all the African delegates are corrupt. All. Not some of them. Not a few of them. Not some named individual. All of them.

Arriving from a long session with the African delegates, Treasurer Freeman expressed distaste for the way he had been obliged to do business. What did he mean - had they all simply walked in and held out their hands for a bribe? "No," he replied, "their hands were out before they came through the door."

Nice. Particularly nice, that "all". They're all like that. These Africans. 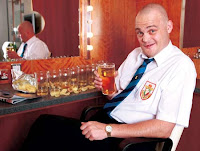 I think you've had enough mate...I have, anyway
By this stage, if you were Mr Hillyard's mate, you'd probably be telling him he'd maybe had enough and perhaps it would be a good idea to go home now. But Mr Hillyard won't have any of it: he isn't finished by a long chalk. Them Muslims, y'know...

It was also interesting to observe how the women's event could function as a rough-and-ready indicator of geopolitical threat levels. Even if you knew nothing

I'm sorry, are the Yemeni women's team suspected of terrorist activities or something? If not, then what in the name of God is this stuff doing in a report?

And yet there's more: would the saloon bar bore's performance be complete without an invocation of the war? It certainly would not....

Werner Stubenvoll of FIDE's Technical Administration Panel shouted from the podium that they had no power to vary what had been decided in the General Assembly. Of course it is normal enough to hear elderly Austrians like Herr Stubenvoll claim that they were only following orders.

Thus, as Muslims are terrorists and Africans are corrupt, Austrians are Nazis. 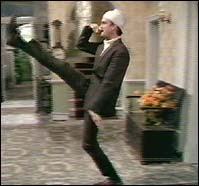 No, don't. Really, don't.
Now it's my experience that people like Mr Hillyard can't really help themselves. They mistake their prejudices for worldly wisdom and their boorishness for humour, and if you say politely, "look, this isn't really acceptable" they're most likely to get into a massive sulk and do it all again, but twice as loud. You can't do that much about it.

But Mr Hillyard only wrote the piece: he didn't publish it. So what excuse do New In Chess have? Have they ceased to operate any editorial standards, or do they think this is all right? Is this new editorial policy? Can we expect more ignorant, unfunny and prejudiced rants in future issues? Which social groups, races and nationalities can we expect to see abused in issue 2010#8?

Perhaps they're just having a gigantic sulk of their own. Plainly they're unable to accept that their favoured candidate for the FIDE Presidency could have lost for any reason other than corruption, it being inconceivable that anybody could have voted the other way because they preferred the other candidate.

I say this, partly, because of an unintentionally hilarious piece elsewhere in the magazine in which they are similarly unable to understand how their favoured candidate for the ECU Presidency, Robert von Weizsäcker, who came a long way third out of three, could possibly have lost. I mean,

he could count on the Western European votes to begin with and he had the firm support of Kasparov and Karpov.

In the bag then! And yet he got only nine votes out of fifty-four. Who would have thought that there were Europeans outside Western Europe?

There follows a dog-ate-my-homework explanation, which you can read on page 6 of the magazine, should you wish. But anyway, I suppose it is possible that New In Chess have retreated into a Western Europe-versus-the-world mentality, which, allied to a gigantic sense of injustice, caused them to shrug when presented with Mr Hillyard's nasty article.

Maybe. But I think they ought to do better, sense of injustice or no. There are all sorts of terms one could use for the article, but for the moment, let's settle on embarrassing. It's an embarrassing piece. If you were in public with somebody who talked like this piece talks, you'd be embarrassed. It's embarrassing to read it and it should have been too embarrassing to publish.

Papua New Guinea have already complained to New in Chess regardingthe condescending comments in that issue about their delegate (mentioning her skin colour for some curious reason). Kasparov failed to interest the delegate not because she was not worried bout who won the election but because her Federation had already given her voting instructions and she was not going to go against them.

This was indeed a really weird article to read in New in Chess. My eyebrows rose further with every page I plowed through.

Those are some astonishing quotes and I wonder what responses they will get from the named parties?