When we were Kings XIV 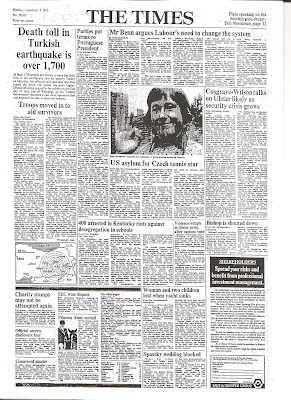 I've often read - and when I bang on about chess in the 1970s people sometimes tell me - that the popularity and interest in the game three or four decades ago was all about Bobby Fischer. It's an understandable argument, but one that fails to grasp the bigger picture and doesn't, as a result, really explain the unparalleled interest in the game back then.

It's certainly true that Fischer became a big enough name that refusing to play after Reykjavik didn't end the media's fascination with him. I've mentioned before (WwwK VI) how a rumble with a journo generated three separate reports about him in The Times towards the end of 1977, but perhaps the true measure of Fischer's celebrity, in the old-fashioned sense of that word, is the fact that even his death (e.g. The Guardian January 18 2008) didn't bring a halt to his appearances in the press. There was the legal tussle over his estate (28th January 2008) and just a few months ago it was reported first that his body was about to be (17th June 2010) and then had been (5th July 2010) exhumed as part of the ongoing paternity case.

If what was all about Bobby, what to make of the front page of The Times of the 8th September, 1975 (reproduced at the head of today's blog)? Tucked away at the bottom you'll find the following story:-

Spassky wedding blocked
Moscow, Sept 7. – Boris Spassky, the former world chess champion, plans to marry a Frenchwoman in Moscow, but she has been told to leave the country.

Spassky and Marina Stcherbatcheff, a secretary in the commercial section of the French Embassy, believe that the Soviet authorities are trying to block the marriage.

The Soviet marriage bureau has refused to grant them a wedding date before November 11, but Mlle Stcherbatcheff is due to leave Moscow at the end of September.

“I feel as though I playing against an opponent I cannot see”, Spassky said. Spassky parted from his Russian wife, Larissa, in July last year and he said the divorce became final two months ago.

Mlle Stcherbatcheff said the French Embassy was not defending her. “I am not leaving the country”, she said. “I am going to stay.” – AP.

141 words on the front page of a mainstream national newspaper about a former world chess champion (not) getting married? It's not much of a story in itself is it? Can we explain its appearance - its prominence - by the vicarious fame that Spassky achieved by being Fischer's victim in 1972? No, I think not.

For a clue to what the Spassky story is really about all we have to do is travel a few inches up that same front page. Just above the fold, illustrated with a large photograph, we find a headline, "US asylum for Czech tennis star" and The Times' account of the 18-year-old Martina Navratilova's defection to the West.

Spassky's story, like Navratilova's, is a Cold War narrative. They are the geo-political conflict of the time writ small. The clash between the Eastern Bloc and Western democracies reduced to the lives of individual human beings, one of whom would like to play tennis wherever and whenever she likes and the other wanting to exercise the basic human right of getting married to whom he chooses.

Fortunately, there was a happy ending for Spassky as well as the teenage Martina. Perhaps mindful of the propaganda disaster of such stories appearing in across the Western press - and make no mistake about it, reports such as these got the prominence that they received solely because they demonstrated to Western newspaper readers (or were perceived so to do) that the West's economic-political system was superior to the Soviet Union's - the Politbureau relented and he and Marina were eventually married at the end of September. 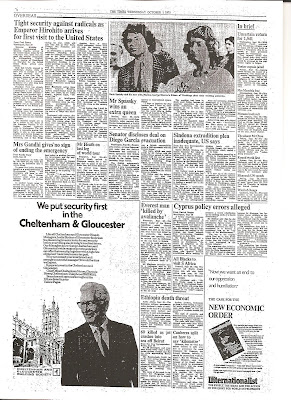 [Photo with caption: Boris Spassky and his new wife, Marina, leaving Moscow’s Palace of Weddings, after their wedding yesterday]

“I hope to improve my play because now I have an extra queen for my game”, Mr Spassky, who is 38, said. He lost his title to Bobby Fischer of America in 1972.

In a two-minute civil ceremony at Moscow’s Palace of Weddings, he married Mlle Stcherbatcheff, 30, a French citizen of Russian émigré parentage, who has been working at the French Embassy here for the past 15 months.

The wedding had been in doubt until Friday because of apparent opposition by the Soviet authorities, who put pressure on her to lave the Soviet Union.

“We want to live in Moscow”, Mrs Spassky said. “But I don’t know about my visa or how long I can work. You know as much as I do.”

It was Mr Spassky’s third marriage, the first two having ended in divorce. He divorced his second wife in July after a long separation.

After the ceremony, drinking champagne at a reception in a nearby room, Mr Spassky was asked if he would go on representing the Soviet Union in chess. “Of course”, he replied. “I am playing in a tournament in Moscow beginning on October 13. Therefore my honeymoon will consist of chess.”

Asked if his new wife played chess, he said: “Fortunately not. She’s shown no interest, but if she does I will teach her.” – UPI and Reuter.

I like the "My honeymoon will consist of chess" bit. Start as you mean to go on, eh Boris? More significantly, did you notice how 'Spassky-actually-gets-married' only makes page 8 in contrast to the front page of the 'Soviet-authorities-stop-Spassky-getting-married' story? That's because there's much less of a 'freedom opposing authoritarianism' angle in the second report.

So, seventies chess wasn't just about Fischer at all. He was an important figure of course, but even if as an American he was necessary for the media's chess boom he certainly wasn't sufficient. Bobby would have been nothing without the Cold War. 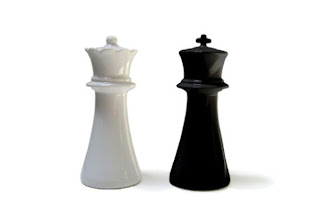 Well, today, in St. Lucia, I have the honour of attending the nuptials of my fellow blogger, Mr Tom Chivers, and his bride Ms Sarah Condry. If I can't write about weddings today when can I? 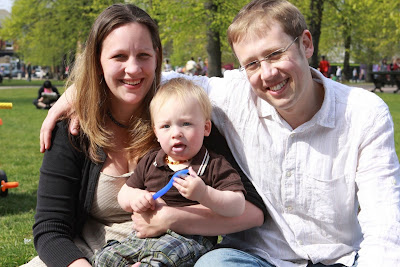 If you get to read this anytime soon, Tom & Sarah, congrats from this blogger, too, & all the best for the future.

Congratulations Tom and Sarah. Hope the weather is ok in St Lucia. It's erm...lovely here!
Andrew