Chess in Art: Nothing is wasted, only reproduced

Much to my regret, I haven't managed to get to the London Chess Classic, either this year or last: though following it on the internet is one thing, seeing it for yourself is surely quite another. But time and distance don't always permit.

Last year, reading reports of the tournament, something struck me about the portraits of the players. Something to the effect of "where have I seen that before?" But I never found time to mention it, and the moment passed. 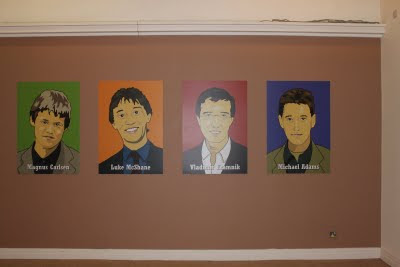 Don't I know you from somewhere?
Still, when this year's tournament took place, I noticed that they were using the same portraits (albeit with some new ones, since the line-up wasn't precisely the same as last year). So I thought, this time, that I'd ask about it. 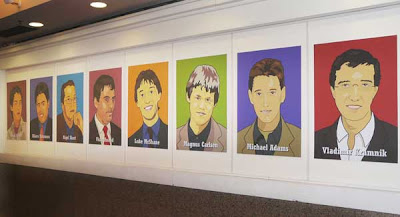 [Image: Michael Adams Chess]
The portraits, it seems, were produced by a company called Create Services, who if I understand correctly are headed by Mark Rivlin, a member of Hackney Chess Club. I wanted to find out who'd produced the portraits, and then to ask them whether they felt they'd been inspired by anything in particular. So I asked:

(a) were the portraits produced by any one individual in particular?

(b) did they have any particular inspiration? 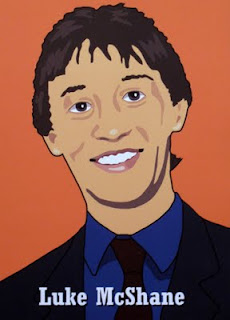 Don't Luke twice, it's all right
Mark was kind enough to forward my enquiry to the artist, Jonathan Payne, who replied to them thus:

(a) were the portraits produced by any one individual in particular?

All the portraits were produced by Jonathan Payne, a graphic designer working for London based design agency Create Services. 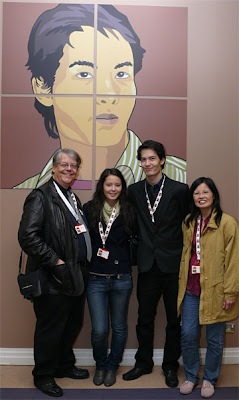 (b) did they have any particular inspiration?

The inspiration for the illustrations was the London Chess Classic, the highest level chess tournament in London for 25 years. The intention was to provide a vibrant backdrop for the venue at Olympia.

To give the competition a unique branding, a sense of occasion and a dramatic setting it was felt the use of strong, fresh colours and a focus on the individual players, highlighting the caliber of the competitors, was essential. Also by using this particular strong style it was possible to give all the competitors equal billing, with similar tones and expressions.

Well, I don't know about that - is Luke McShane's expression really similar to David Howell's? - but that's another point entirely. What was bothering me was the question of inspiration, which I'd always thought of as an artistic concept, rather separate from the question of who had actually commissioned the work. So I asked again:

Thanks very much for your email.

That question's received no reply at the time of writing this post. So, by way of a possible answer, here are the celebrated portraits, now in the National Portrait Gallery, that Julian Opie painted for Blur. 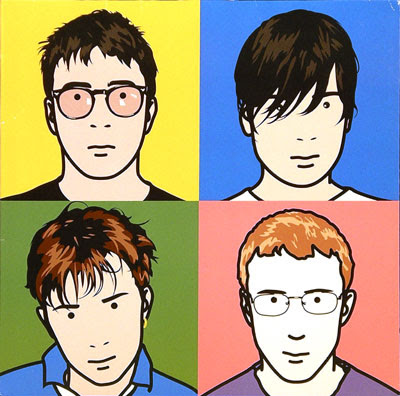 Thanks to Mark Rivlin, Jonathan Payne and Martin Smith]

Just wondered: could the pictures - or something close to them - have been produced from photographs using photo-processing software such as Photoshop?

McShane looks a little Kamsky-ish, no?

Julian Opie probably had a few Warhol and Lichtenstein posters on his bedroom wall. And of course the Beano and Viz comics under the bed. Thousand years of Japanese Manga anyone?
As for Blur, the four piece pop combo. Umm, that sounds a familiar format.