What happened next XV 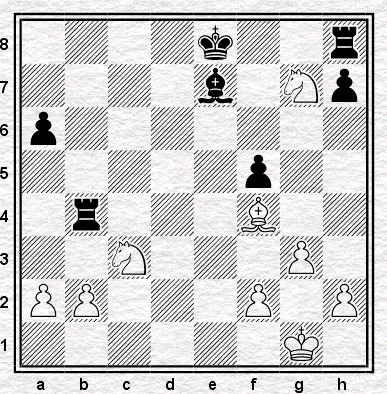 Yesterday's position was, as several readers recognised, from a game at the Blackpool Zonal in 1990 between Paul Motwani and Murray Chandler.

Black, who is winning easily, finished the game with the witty 30...Rxf4!, taking advantage of the possibility of 31...Rg8, winning the g7 knight, should the rook be recaptured, and taking further advantage of the apparent failure of either player to see that White's previous move, 30.Nxg7, was in fact 30.Nxg7+. Knight takes g7 check.

Although the illegality was subsequently discovered, the result stood, on the grounds that White's resignation trumped other considerations. One can speculate that the fact that White was already lost may have made this rather easier for him to bear: and then speculate further on how this mutual error actually came to occur. From White's side of the board, might this have been another instance of a hidden king, the bishop on e7 obscuring the king on e8? Possibly. But the bishop, unlike the queen, is not bigger than the king.

I had a discussion, at the British Championships in Scarborough once, with a Streatham and Brixton teammate, about the ethics of saying "check" when such is delivered. He said that he always said "check", and considered it a basic courtesy. I, on the contrary, said that I never said "check" in a competitive game, not least because the opponent might take it as an insult to their intelligence. But perhaps, if a grandmaster (as Chandler was, though not yet Motwani) can overlook that check has been delivered, then no such insult can be assumed?

Of course, if both players overlook that check has been delivered, there's nothing that can be done. But did Motwani overlook it? Or did he see it, but then suffer such a shock at Chandler's unexpected and apparently devastating response that he forgot?


[This game originally came to my attention via Keith Arkell at the English Chess Forum.]