When we were Kings XV

Articles about chess were published on the leader page ... 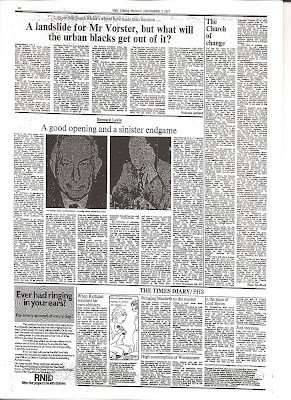 A GOOD OPENING AND A SINISTER ENDGAME
By Bernard Levin

Chess is the only game with no drawbacks; it eliminates chance (at any rate from the board – it could hardly be expected to do so from the lives and temperaments of the players), anyone can learn in an hour or two how to play, it is infinite in practice even if not in theory, it requires no expensive equipment, it needs only two players, the talent for it is apparently distributed entirely at random being found alike in players with no other intellectual attainments and in those of immense learning, it has never incurred ecclesiastical displeasure, and until very recently it has not been affected by political or ideological considerations.

I know of no game, at any rate of a complexity that makes it worth playing, that can say as much. And of course there is no game, and there are precious few activities of any kind, that give the participants a pleasure so intense and varied.

Its literature is enormously extensive, and – unlike that of games such as bridge – much of it can be read with interest by non-players. And I have rarely had a pair of chess-books in my hands of which that last point could have been made more forcefully than in the case of The Encyclopaedia of Chess, edited by Harry Golombek, and Chess Is My Life, by Viktor Korchnoi (both published by Batsford).

Mr Golombek is, of course, the Chess Correspondent of this newspaper, where he mixes chess entertainment with chess instruction every Saturday;in addition, he carries out various official functions on behalf of the International Chess Federation (he acted at the Fischer-Spassky World Championship match in Reykjavik, and it must have been largely thanks to him that that episode didn’t lead to the Third World War). Approached by the publishers to write a comprehensive encyclopaedia of chess, he expressed amazement, which will be shared by every player, that there was no satisfactory work of the kind already in existence, and then got down to producing his own. He recruited six associate editors, including two British Champions, and six more contributors; he does not tell us on what principles the work was divided up, but some of them can be deduced form the authorship of the entries, each of which bears the initials of the writer. Not that it matters much; the user of an enyclopaedia wants to be reassured on only a few vital points: will he find what he is looking for, will the information by accurate when it is found, will it be supplied in generous, but not excessive, measure, will it be presented in a style (and format) that makes it pleasant to read? All these tests this book passes triumphantly, and I prophesy that within only a few months chess-playing households throughout the English-speaking world, and indeed beyond it, will be seeking chess information, and settling chess arguments, with a cry of “Where’s the Golombek?”

The entries cover technical terms, from Absolute Seventh Rank to zugzwang, accounts of chess history in all the countries which have any, details of all important international tournaments ever played, the official Laws (though I suspect it would be impossible to learn to play, if you knew nothing of the game in advance from these alone), a vast and very useful section on problems, an almost equally large entry on the Endgame, a number of delightful entries on some of the byways, such as chess in films and in Shakespeare (here is also an entry under Barmen, though this is unfortunately not an account of famous drink-dispensing players but a description of the chess festival held in 1905 in the German town of that name), and – by far the largest group of entries – biographical accounts of even the slightest distinction for whom records of any kind exist.

These will provide the greatest pleasure for the non-players, as well as the greatest amount of information for the addicts. We know that Count O’Kelly de Galway is not only a real person, but, if you please, a Belgian grandmaster; but which of us knew that the present World Champion collects stamps? The biographical entries, indeed, are models of their kind: extraordinarily concise for the information they convey (which includes details of the players’ lives, chess careers, style of play and match temperament) and for the most part written with considerable grace. (The leading ones are also supplied with photographs – the book is lavishly illustrated throughout – though only Mr Golombek himself has two such portraits accompanying his entry.)

All reviewers of reference books have to draw attention to at least one omission, to show how clever they are, though I was hard put to it to meet this exacting requirement in the case of The Encyclopaedia of Chess. I think, though, that there ought to be (I imagine there will be many more editions – indeed, there will have to be, for the book will inevitably get out of date as new players of importance arise) an entry under Chess in Literature; there are a few such references here and there, but they are not collected, and under no heading at all could I find any reference to the most celebrated of all the appearances of chess in fiction, Stefan Zweig’s The Royal Game. Mr Golombek might also consider an entry for chess metaphors, which have passed into general use in many languages. But his most urgent task is to go round to the publishers with four copies of his sumptuous and indispensable book tied together (they would weigh well over a stone, not counting the string) and bang the managing director over the head with the resulting parcel, for the combined idiocy and unprofessionalism of putting out the book with nothing whatever – neither title nor editor, not even publisher, colophon or decoration – on the spine or the boards; as soon as the dust-jacket disintegrates (which, with a reference book, will inevitably be fairly quickly) the volume will look like a rather nasty ledger, entirely black and entirely blank.

I said in my opening paragraph that chess had not “until very recently” been affected by ideology; alas Korchnoi’s book would make the qualification necessary if nothing else had done so. It is an utterly absorbing and haunting book, and with the exception of the Appendix, in which he gives the scores of his outstanding games, can be read even by those who have never heard of chess. For Korchnoi’s story is that of a Soviet grandmaster, feted and cosseted like a pop-star, who preferred truth and his own integrity to the Party line; what followed we learn from his account of the pressure on him, the brutal intimidation (the authorities employed gangs of thugs to shout unnervingly during his match against the reigning Soviet champion, whom they could not allow to be beaten by a political deviant), the threats (“You beat Karpov and just see what we’ll do to you”) the treachery of so many of his friends and colleagues when the screw was turned (a few behaved well, including Spassky, who has himself been hounded by the authorities for his pains).

The Soviet authorities were in a genuine dilemma, which became acute when Korchnoi finally got out of the country. Most dissidents are ignored by the Soviet media, and very rarely indeed is any mention made of one who has escaped or been expelled. But this technique was impossible in the case of Korchnoi; such is the passion for chess in the Soviet Union, and such the official encouragement of it, that Korchnoi was known to literally millions of Soviet citizens, who had sat before television screens, watching him as he played. For the first time, the Soviet masses, as opposed say, to the intellectuals or the Jewish community, could not be prevented from knowing that one of their idols was in disfavour with the regime, and the campaign against him seemed to be imbued with genuine panic. (A new Soviet book on the 1974 Karpov-Korchnoi Championship match had to have all references to Korchnoi deleted, so that he is simply referred to throughout as “the opponent”.)

But there may be worse to come. At this moment, Korchnoi is moving towards victory in the final play-off round (ironically, against Spassky) that will decide who is to challenge Karpov for the World Championship. Since the Championship is run by an international body not under Soviet control, they may be faced not only with reporting a fight between their World Champion and a “traitor”, but – the ultimate horror – the defeat of the former by the latter. Already, Korchnoi has been playing like a tiger; if he gets the right to challenge Karpov for the crown he will have a drive of pride, conviction and hate inside him that will take some stopping. I wish him well.

Innaresting to see Bernard Levin writing about chess. He gushes about the game in his book 'Obsessions'.

A professional pompous arse, in my opinion.

You're not that bloke he punched him on live TV are you?

Before I was born.

That was Levin Mark I, of course, though manifestly a pompous arse even then.