Here’s something you won’t see very often. I don’t think I’ve done it before, and I’m not sure whether I’ll ever do it again, but today I have a little something for you on endgame technique.

If you were listening to Radio 5 Live on Friday night you might have heard David Howell interviewed by Colin Murray (with Pat Nevin and Perry Groves!) on Kicking Off [ You've got until Thursday night to listen to this: skip to 2:25 for the Howell interview ], the first time ever that chess has featured on the Beeb's weekend sports preview programme. Howell talked about drawing his game with Anand: no small achievement for sure, although it seems the boys had been hoping to interview Luke McShane, presumably because he’d beaten Magnus Carlsen a couple of days before. McShane, however, was still busy with Kramnik and it wasn’t until around 9:35 (after seven and a half hours of play and five minutes after the radio programme was over) that he finally secured his draw.

Watching the moves come in over the internet, I really only had one clue as to what was going on:-


I inferred from McShane’s rook, therefore, that he might be OK and yet I also knew that the theoretical status of his position was really only half the story anyway. As it turned out, Luke had it all in hand. Rather sporting of Vlad to stalemate him at the end there, I thought. 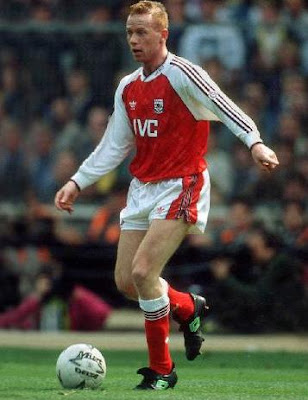 
McShane – Kramnik inspired me to take another look at a correspondence game I'd played in 2009. It's worth looking at today, I think, because I utilised the other main defensive technique for these endings.

A draw for me too, then, although there were several factors that greatly enhanced my ability to conduct this defence successfully. Not the least of these was the fact that I could play my moves after consulting Nunn’s Secrets of Pawnless Endings (Gambit, 2002). Probably almost as important was the time control - at three days per turn my game was far from the rotten experience of having to draw a technical ending after several hours of play - and furthermore, from a purely chessical point of view, the position at which we reached KR v KRB, 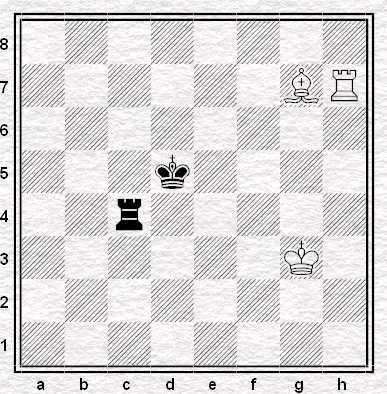 was probably about as favourable for me as it could be. My king is in the centre of the board while White’s is cut off and, better still, his/her pieces are huddled together in the corner. 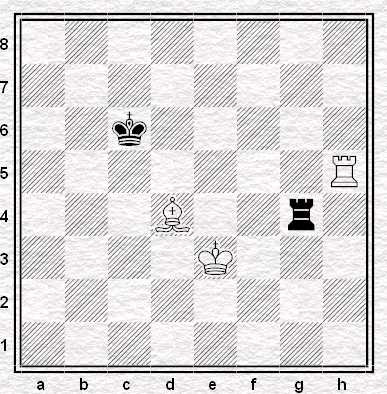 4 moves played/46 before I can claim a draw.
White was obviously going to put his bishop on d4 allow him to bring his king forward so I switched sides with my rook to give it more room to operate. The other advantage of this manoeuvre is that it will take White another couple of moves to make any progress with his King. As Nunn points out, your defensive strategy always involves dragging things out for as long as possible. That way, even if things go wrong, the other guy might run out of moves before he can do you any damage. 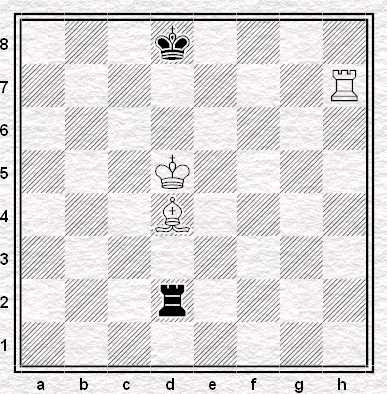 10/40
It looks like White’s made quite a bit of progress since the last diagram: my king is trapped on the back rank now and White’s bishop shields his monarch from checks. In fact, it was exactly this formation – the Cochrane Position - that the defender is aiming for. As it happens this precise position, except the pieces were on the e-file rather than the d-file, arose is Budnikov – Novik, USSR Ch 1991, and is given on page 175 of Nunn’s book.

The good news is that this position is utterly drawn and White’s already taken up 20% of his time just to reach this point. Just another 40 moves to go! The bad news? Nunn gives two examples of people losing from the Cochrane Position – and one of them was Judit Polgar! There’s a fine line between ‘drawn’ and ‘lost’ when you’re playing KRB v KR. For example, according to Nunn, if you were to push the king to e6 and the bishop to e5 White would have a forced win.

Switching sides with the rook achieves nothing, objectively speaking, but on the other hand a waiting move at this point gives Black a chance to go wrong and White the opportunity to find out if Black knows what he’s doing. 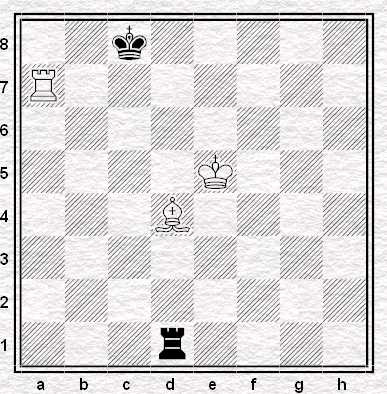 12/38
White can’t make any progress from the Cochrane Position without his bishop, but it’s pinned so first he has to move the king. The easily remembered rule is: whichever side the attacking side goes, you go the other way with your king. That way, when White moves his bishop your rook keeps his king away from yours. One more tip from Nunn: 62 … Ke8 - the equivalent of what Polgar did - wouldn’t lose here, but it makes the job a whole lot harder so it’s best avoided.

13/37
Again, Black can - must! - just wait. As long as Black has the nerve to be patient, White won’t ever achieve anything moving the rook along the rank. 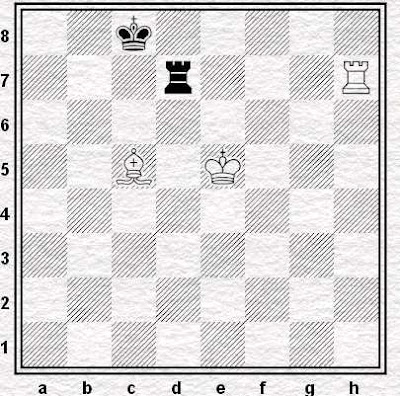 14/36
This is why the Cochrane Position saves Black. Once the king and bishop move - which they have to do if White’s going to make any progress - Black can switch his rook to the second rank. With the rook on d2 Black’s king is going to escape and what’s more White’s king is cut off again. 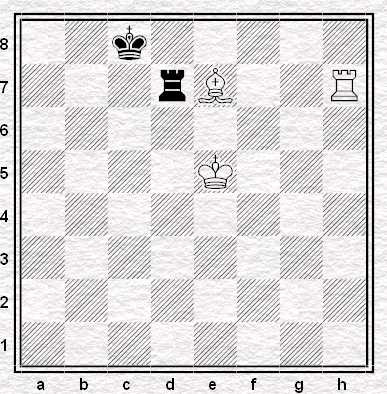 14/36
White’s got to do something to avoid the exchange of rooks and this is as good as anything. In fact, Budnikov - Novik went the equivalent of 65 Rh8+ Kc7 here, so I had to think for myself now. Fortunately, just like the middlegame, endgame analysis is infinitely easier when you know what you’re heading for, and when thinking about my next move I was able to calculate my way to the game’s final position. The only thing I didn’t quite foresee was which rank the White rook would go to on move 70 (I’d expected White to put it on c2 but in fact in went to c8 ). 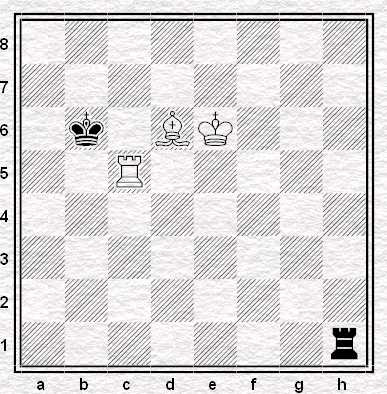 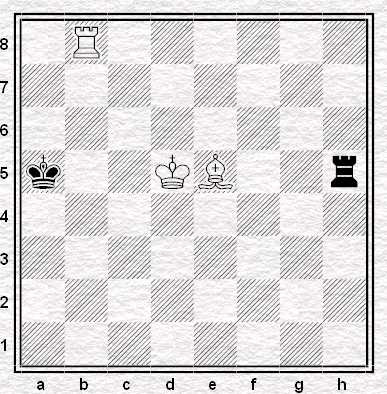 23/27
And here we have the Cochrane Position again, the only difference from move 60 is that the board has rotated 90 degrees anticlockwise. Possibly recognising that he’d made no progress, White now played 74 Ra8+ and offered a draw. This surprised me a little because, while I’m fairly sure that I would have been able to hold the draw in the end, there’s still a long way to go. It felt like I’d been defending this ending for ever and I was astonished to discover that I wasn’t even halfway to the 50 move mark when White offered to split the point.

So defending KRB v KR in an internet correspondence game turned out to be highly educational and quite fun. That said, I’m quite sure the same experience over-the-board would have been very different and I rather doubt that I'd be able to save the game in those circumstances. That the London Chess Classic is played with incremental time controls only makes McShane’s achievement against Kramnik even more impressive. Definitely worth missing a chat with Perry Groves for a performance like that, I'd say.

Stout defence required:
Michael Caine and the boys prepare to defend KR v KRB against the Zulus at the Spion Kop Open, 1900


Post Script:
One last thing about Friday night. The modern world being the technological wonder that it is, I was able not just to combine listening to the radio with watching a chess tournament, I was also able to kibitz on the EC Forum too.

A little after 9pm, I posted a message suggesting Keith Arkell was probably enjoying the end of McShane – Kramnik. Theoretical draws they might be, and yet Keith, you may recall from our interview with him last year, has scored 17/17 from such endings over the years.

Lawrence Cooper answered the next morning, however, writing that Arkell in fact had missed all the action because he was playing in the Classic blitz tournament. Not only that, but while Kramnik was failing to grind Luke down, Arkell was busy turning 17/17 into 18/18! A truly astonishing record.

Bravo! For the excellent post; and to Cool Hand Luke.

ChessPub thread on KRB v KR can be found here.

and now gormally vs jones today

I remember that away end, from an Oxford game earlier the same season. Not only was there that fence, one of the worst I can recall, but the terrace actually started below ground level and was shallow anyway, so there was absolutely no way of obtaining a decent view from anywhere. And the consequences of having them, as people were to find out not long afterwards, were much worse than simply an appalling view. Never again.