Christmas Bonus week here at the S&BC Blog:
we're suspending the usual Mon-Wed-Fri schedule and posting something every day.
Enjoy.

It seems like I might owe Jeffrey Archer an apology. That's not something you get to write every day is it? Perhaps you're thinking that since it's the season of goodwill to all men - even Tory jailbird perjurers - that I've gone a bit soft on the guy who once offered a sex worker thousands of pounds because he hadn't even met her, let alone slept with her. Well, no, on this occasion I genuinely think that I was wrong and he was right. 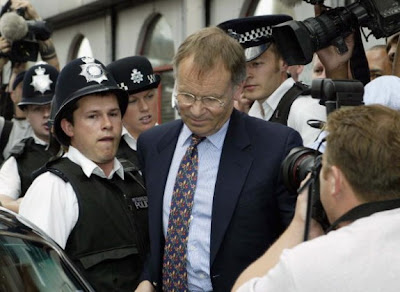 Jeff with some old friends

My memory is hazy now*, but I was at Southampton University at the time so it would have been at some point between 1989 and 1992. A friend of mine, a young fellow we knew as Billy F-A, had read a collection of short stories penned by the "master story teller" (ahem) one of which happened to have a chess theme.

"What does [x] mean?", Billy asked me, reading out a line that supposedly included a chess term.

"Doesn't mean anything", I replied.

"Really? What does [y] mean, then", Billy tried again.

"That doesn't exist either. He's just made it all up."

Our lovely scribe, it turned out, had come up with a bunch of crap that kind-of, sort-of, sounded like chess expressions, but that existed only in his fertile imagination. At this distance, there's only one that I specifically remember: Archer's use of the phrase "seven-pawns attack".

"There's no such thing as a 'seven-pawns attack'", I rather grandly told my friend, "and if there was it would be rubbish. By the time anybody pushed that many pawns they'd be checkmated."

Billy seemed rather put out that an author might be so slapdash with his research - these were innocent times - but there the matter rested. 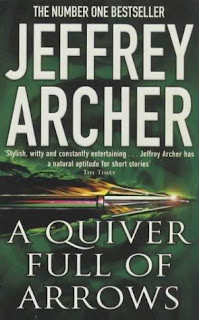 Was it this one?
You can buy it here for a penny to find out. Rather your money than mine.

Enough with the reverie. Fast-forward twenty years, and you find me at Albany Chess Club playing the Black side of a game that started thus:- 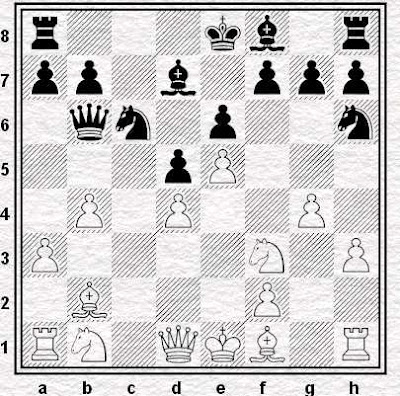 Eleven moves in, seven pawns pushed! Who'd have thought it?

It's a funny looking position, but well known to theory - I'd reached it twice previously in correspondence games - and since the White side has been played by chessboard geniuses such as Alexei Shirov (e.g. against Sadvakasov at Astana in 2001) and 'Mr. Advance French' himself, Evgenny Sveshnikov, I think we can assume that White's play isn't just total garbage and the seven-pawns attack is playable after all. More than that, I discovered later, this isn't even the only way White can push (nearly) all his pawns in the Advance French.

instead would have brought us here 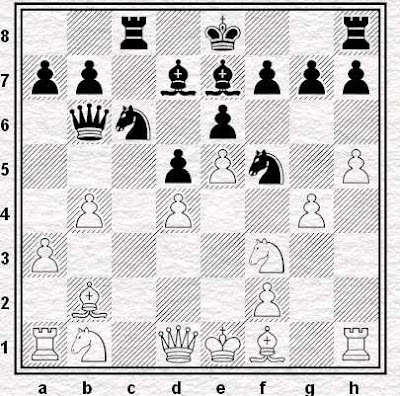 and Shabalov was over 2600 when he played that game, so presumably he had some sort of a clue as to what he was doing.

There you have it: conclusive proof that Jeffrey Archer isn't always full of shit. Not only is it sometimes possible to throw seven pawns forward, it can even lead to fascinating chess. That London League game probably set a personal record for combined late castling (move 19 for him, 22 for me) and turned out to be a highly enjoyable - if mostly incomprehensible to me - slugfest.

So, sorry to Billy F-A for giving some poor advice and sorry to you too, Jeffrey Archer: you were right all along.


Duffers' Delight:
I - an early ... Be6 in the Queen's Gambit Accepted.
II - some Dutch mentalism from Simon Williams.

* Some of the details in this old anecdote might be slightly wrong, but, sorry, I can't be arsed to check. Partly this is because I'm lazy and partly because it's kind of appropriate for a blog post about Jeffrey Archer to have a few inaccuracies, don't you think?

Simon Hoggart in his book Long Lunch has some surprising things to say about Archer - one that his books are in fact ripping yarns and highly readable, second that Archer is not so much a liar as an unwitting fantasist.

I read some of the Archer canon when I was in my teens. Not great works of fiction by any means, but certainly highly readable when I was that age.

Earned him a few quid anyway. Not all of which went on buying off ladies employed in the sex trade.

I've read some of his stuff, and also found it quite enjoyable. Should I reveal my identity, for this fact to be associated with my name for all time. Naaah!

Wouldn't it be funny if our anonymous friend above was Brian Eley?

In this game, I'd moved every pawn by move 17. I'm much better at that point:

(Also a French - it's the opening of choice for this idea.)

The Advance Caro-Kann is no slouch either, in that respect.