[An early draft of today's post was published in error yesterday morning. Since then I've made a few minor changes to the main body of the text and the conclusion has received a much needed polish.]

From age eight to eighteen, my son Daryl actively participated in the highly competitive world of "Juniors" tennis. By age twelve he had developed all the basic strokes, and by the time he was in his late teens, and over six feet tall, he - and any of his peers - could have taken the court with any of the world-class touring pros. Daryl would not have won any games against the professional, but he could have won points, and if you had sat in the stands and watched them play just a few points, you could not have easily discerned that the pro was levels above the teenagers ...

In tennis, the strokes of the leading juniors look the same as those of the top pros. Minor differences set the two groups apart.

Did you see Doctor Who - Neil Gaiman's The Doctor's Wife - last Saturday? It was a great episode which, aside from the absence of a chess theme, was missing only a cliffhanger ending and the opportunities for deeper and more involved narratives that come with multi-part storylines. I don't want to give anything away, we may have a reader or two who hasn't already seen it, so all I'll say here is that fans of Jonathan Rowson's concept of "talking with your pieces" will find much of interest awaiting them at the Beeb's i -Player catch-up service.

Consider this all another (see also Star Trek and Blake's 7) pitiful excuse to write about telly sci-fi if you will, but the Candidates' matches we've been seeing in Kazan over the past couple of weeks remind me of a single-part Doctor Who story. It's not that four-game matches must be total rubbish, but they are inevitably going to pale in comparison to the longer format that seems to be completely out of fashion these days.

Sad to say, but Candidates' matches of a decent length have gone the way of the four-part plus stories that were standard for Doctor Who when I was a nipper. If Grischuk - Gelfand, which starts today, goes the distance (i.e. the 'full' six games), the two Gs will have played a total of 14 standard length games throughout the whole event. That was the scheduled length of the Candidates' final alone for the cycle which took Nigel Short all the way to a World Championship match with Kasparov, and if anything Nosher's 40 games spread over four Candidates' matches is itself rather limp by the standards of his predecessors. Viktor Korchnoi, for example, played 43 games on his way to Baguio in 1978 and had he not finished off Polugaevsky and Boris Spassky early, it could have been as many as 48.

Which brings us to Ken Weber's Maximum Entertainment. Substitute Grischuk and Gelfand for Weber's 'leading juniors' and switch-in Anand, Carlsen, Aronian and (perhaps) Kramnik for his 'top pros' and the passage at the head of today's blog describes the fundamental problem with very short Candidates' matches rather well, I think.

Grischuk and Gelfand are currently 12th and 16th on the FIDE Rating List at 2747 and 2733 respectively (12th - 2752.2 - and 15th - 2740 - on Hans Arild Runde's Live List). They're certainly not 'levels' below the three or four guys who have a realistic claim to be the absolute best chess player in the world. With 40 to 80 fewer elo points to their names, however, they clearly are a level down even if, just like Weber's tennis players, it's minor differences, microscopic even, that divide these men. Four-game matches, the equivalent of FIDE watching them bash the ball back and forth across the net for a few points, simply aren't enough to distinguish one from the other.

Consider Grischuk's progress to the Candidates' final, for example. According to GM Sergey Shipov, had Aronian played Ne5 instead of 69 Nc5 in game one of the quarter-final, 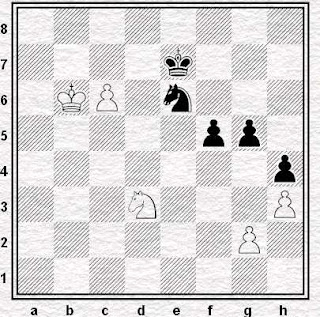 or if Kramnik had tried Rb1 or Nf4 instead of 31 Rd8 in game four of the semi, 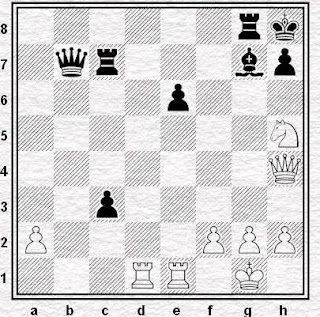 then Grisch might well have lost those games and been knocked out of the tournament as a result. They didn't, though, and he went through after taking the rapid and blitz play-offs. When entire matches hang on such slender threads sheer luck must inevitably play a significant part in determining the outcome - which is just about the only way we could have made chess even less appealing than Edgar Allan Poe thought it was (see yesterday's post).

'Duffer' is a relative term. It seems - and is - harsh to apply it to folk who are the 12th and 15th best chessers out of the 7 billion-odd people who live on this planet, but the fact remains that Grischuk and Gelfand are a notch below the very best that humanity has to offer our favourite game. Whatever else they might be, neither of them is the best chess player in the world right now and nor will they ever be. In most circumstances that wouldn't matter a jot, but it is rather important when you're talking about a contest to find a challenger for Vishy Anand's title of World Chess Champion.

They've made it through to the Candidates' Final which one of them will eventually win and therefore, assuming FIDE manage to find somebody to pay for it, get to play that match with Anand. They've played to the rules in place so good luck to them; chesswise, there's much to look forward to regardless of whether it's Grischuk or Gelfand who gets to play Vishy.

None of that changes the fact that turning the Candidates' tournament into an event that any one of fifteen or twenty people could win demeans the World Chess Championship itself and risks turning the title into a meaningless bauble. I understand there are financial issues to be considered*, but if the Challenger for World Championship isn't the guy other than the existing World Champion who plays the best - the absolute best and not just kinda-sorta-perhaps-one-level-down-from-the-best - why bother to find one at all?

* for FIDE just as for the makers of Doctor Who. The BBC favours single-episode stories for Doctor Who because it makes the series easier to sell abroad, which in turn allows the Beeb to recoup some of the costs of production.  Similarly, a decent length Candidates match could cost twice as much to run and FIDE is hardly being flooded with cash pouring into the game just now. True, they could have gone for an eight-player double-round all-play-all instead of these micro-matches, but while that would be a shorter event (when you take rest days into account) , you'd also have to factor in the extra costs of accommodation and living expenses when all the players and seconds stay for the whole thing rather than half of them going home after a week and another bunch clearing off after a fortnight.

Regarding the small print about accommodation costs, one of the reports suggested that all 8 players are expected to be present at the closing ceremony. Presumably then, they are either hanging round in Kazan as spectators or they've flown out and will fly back later.

That's an interesting snippet anonymous. I'm guessing the defeated quarter finalists will be flown back and forth - if *I* were them, anyway, I'd not be keen to kick around for a fortnight doing not much.

If they are all still there, though, that doesn't leave much reason not to have an all play all. I'd much rather have Candidates' matches but not when they're so short. Surely a Candidates' tournament would be better?


@Morgan: yes only perhaps Kramnik. I'm a big Vlad fan, and I wanted him to win here. Still, if we're talking about the very best of the best, it does seem to me that while there's an argument to consider him in the same bracket as Anand, Carlsen and Aronian he might also be a notch (or half a notch) behind.

As I say in the post, if we're going to have a World Champion we have to be hyper selective. If not, there's not much point is there?

Here's the reference about defeated players being required to hang around

Later though, he's been silenced - or silences himself

Interesting - thanks for the link nonny.

I can understand Alex McF deciding to zip it. It's fascinating to read his thoughts but I guess he has to take extra care in the circumstances.

Given that they are there, though, you - or at least I - have to wonder why they didn't go for a double round all play all.

In general, I agree, but a couple of caveats:

(a) I think a major reason why matches have got shorter is that the top players don't really want to play long ones, which would eat into their schedules

(b) the best football team in Europe will be decided by a one-match match later this month.

Except, of course, that the team that wins the CL isn't necessarily the "best team in Europe" at all.

Doesn't anybody seriously suggest that is true (to take an admittedly biased example)of the 2005 winners, for example??

Of course, but the thing is, that's a consequence of actually playing games and matches, isn't it? The in-theory best team doesn't always win. That doesn't make the team that wins any less the champion.

Yes, but they have a european champion every year, not every few years.

I suppose the argument also holds for the world cup though.

That said, it kind of 'feels' different to me and the context for the football champions is not quite the same as it is for chess. Maybe I just care more about chess.

Still, I'm not arguing for 24 game final matches and such like. I know their days are gone. I'd just like to see a system where a single loss - perhaps the result of a single bad move - doesn't get you knocked out.

6 game matches minimum, 10 for the final or a double round all play all.