Victorian artist Richard Dadd (1817-1886) was a Royal Academician by the age of 20. This is a well known photo of him some two decades later. 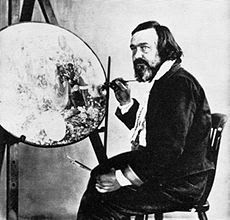 
He became famous for painting fairies. But it wasn’t for this fashionable eccentricity that he was confined, at the age of 24, to Bedlam and then Broadmoor, where he lived out the rest of his 69 years. He was there because he murdered his father. In a psychotic episode Osiris, the ancient Egyptian God of the After Life, told him to do it. An appalling tragedy by any standard.

During his years inside Dadd continued to paint, and exhibit. One of his pictures was a chess painting. Just one. This one. Painted in 1857, after 13 years of detention. It is rather bleached out, indistinct, and altogether rather odd. 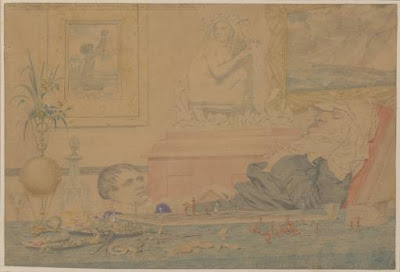 
It is currently on show in TATE Britain’s Watercolour Exhibition, where it was spotted by fellow blogger Jonathan B, who, perhaps in the knowledge that every picture tells a story, suggested this enquiry into the painting, and its chess.

Pausing to look in the gallery most visitors would simply see a game in progress, where the child’s problem seems to be reaching the pieces or, if he can, deciding what to play before his opponent wakes up. Some visitors might also wonder if that kid has got a problem of a more delinquent kind...like cheating. Could he be taking advantage of his elder and better’s careless dozing to adjust, without so much as “j’adoube”, the pieces? Seen this way, the picture might take the moralising stance of so much Victorian art (as suggested by David Greysmith - see References for details of this and other sources consulted), even if the artist, himself, was hardly an unblemished role-model.

And a few might notice that there is hand writing, presumably Dadd’s, across the top of the picture, giving the title, and a subtitle, but at the height it's hung you have to be six-foot-six to read it. The subtitle, not always mentioned by commentators, adds a touch more ambiguity. It is “A Fancy Sketch”, and goes on to give the date (December 18th 1857) and the place it was painted (Bethlehem Hospital, London, St. George’s in the Fields). But is that “Fancy” in the sense of imagined, or as in ornate? We’ll come back to the former in a later post, but as for the latter just look at the picture’s obsessive detail. You don’t have to be a chess addict (though it helps) to find yourself counting off the pieces to check they are all there - it's easier in zoom-able black and white. 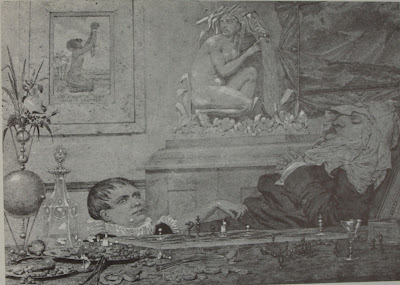 You can make out the complete black (or is it red) army on and off the board, and white's too (don't miss the pawn seen through the decanter), except it appears to fall one 'p' short. Actually, as I found out from Patricia Allderidge’s book, the errant pawn is partially concealed by a nut-case, at the front of the table. 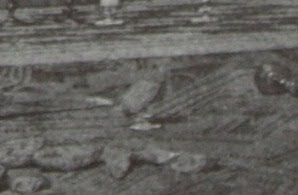 Unfortunately that's not completely clear, and maybe the colour reproduction is more helpful where, before our very eyes, we can see the final pawn, half-hidden. We can see it, you and I, but maybe the child can't, and perhaps that's its problem. But a pawn with a hat on? Dadd's little joke perhaps; a situation for which another lunatic wordplay - madcap - might have been coined.

Now drawn into the chess mysteries of the picture chessers will know that the title has other connotations. Maybe it is not a game, but some kind of chess puzzle: “The Child’s Problem” of the title might refer to a problem on the board, one the child is trying to crack; or even one that it is composing for the later amusement of the snoozing figure (however unlikely that may seem, as we'll explain in a later post). If so, Dadd had to be chessed-up enough to paint a proper position, rather than some random arrangement. But has he?

In the black and white version the pieces on the board are easy to identify: White King, Queen, Rook and a couple of pawns; Black King, Knight and pawn. It’s their precise squares that is the problem. Here the chessically well-read will reach for their copy of Mike Fox and Richard James’ 1987* volume The Complete Chess Addict where the picture was reproduced (or most of it – a lot of the background was cropped, and we'll come back to that as well) for the first time in chess literature (apologies if this claim is wrong, when a corrective comment would be welcomed), and the position diagrammed.

The details in a moment, because there are some other chess mysteries to note first. Eduardo Sadier (who maintains a huge data base of two move chess problems) has pointed out (in an email to me) another oddity from the chess point of view – if the child is solving (or even setting) a chess problem, then he is seeing it from black’s side of the board, which goes against convention in chess-problemdom. And (Eduardo continues) talking of sides, go back to the notion that there might be a game in progress between the two of them: in that case the dozing figure is again on the wrong side of the board. So could there be someone else on our side? Who? You? Me? And at child's eye-level to boot.

So, to get to it at last: what is the position in The Child’s Problem? Although Dadd doesn’t spell it out, and to make it easier for you, it is "White to play and mate in two". Try and solve it, and as you do so, ponder whether the child might be offering a clue with his left hand. If it really is too difficult, you could consult The Complete Chess Addict for the key move (or come back next time). 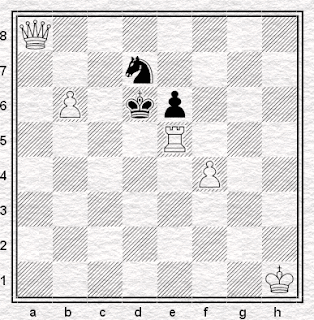 There is more chess yet in the Richard Dadd story, including who transcribed the problem, and what the experts say about it. We’ll see what Dadd did next in a couple of weeks, or so.
BTW a touring exhibition of Dadd's work is about to open at the Orleans Gallery, in Richmond, London.

Subsequent episodes on Dadd, and chess in the Asylum, may be linked via our Asylum Index here.

Bethlem Royal Hospital Archives and Museum.
For an informative biographical note on Dadd see here.
*indicates that a correction has been made to the original post as a result of the first comment. (Martin S.)


Chess in Art Index
Posted by Martin Smith at 11:00 am

Thanks for dropping by Richard. Hope the Richmond tournament goes well tomorrow.

Qd8 for the mate in two.

Quite easy once one realises that one can't afford one's rook to be whipped off and no rook move leads to mate.

Thanks Richard for pointing out the errors, for which apologies to all.

As will become apparent, this mini-series on Dadd relies heavily on material from RJ, for which many thanks are due to him.

Spot on Anon. Would've been surprised if you didn't get it. Find out why in the next Dadd blog in a week or so.

It is the sort of picture you can construct all sorts of narratives around. Keep 'em coming!

I've got another one, but you'll have to wait till next time to hear it!

Regarding the solution ... I'm of the opinion that the fact it is 1. Qd8 is potentially rather significant, but then I'm a complete novice at this art interpretation stuff.