This is the end V 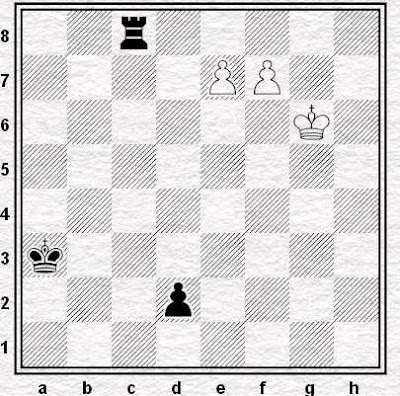 ... if, as a rule, a strong player analyzes an adjourned position more deeply and more accurately than player of a lower standard, then if the analysis is indeed carried out with maximum intensity, this contributes to the development and improvement of the player.

Last week I wrote about the problems I was having getting to actually play endgames. In club chess, I concluded, neither adjournments nor quickplay finishes were particularly well suited to gaining experience in this aspect of the game.

Analysing adjourned positions may have worked very well for old Polugaevsky, but what about those of us who opt for adjournments in our club games and then find that the second session usually fails to materialise? In TITE IV I was somewhat sceptical as to the value of such uncompleted games, and yet, it has to be said that it is sometimes possible to get something from them.

After all, what's the big deal about adjournments anyway? It's not so much that the pause in play gives us an opportunity to analyse an endgame position - we could always be learning from books or solving studies if we wanted to - it's that it can give us the motivation to do so.

The need to hold on for a draw or squeeze out a win is quite an incentive to actually do the sort of work we think we ought to be doing but never quite get around to. So it's all to do with that old adage about necessity being the mother of getting off your fat lazy arse - and that's something that can still hold true whether or not a second session comes to pass.

Take my last non-adjourned adjournment of the 2010/11 season, for example. Although my opponent resigned without resuming the game, until I received his email confirming that he was giving up I had to assume both that he'd be playing on and that he'd be finding ways to keep the game going rather than meekly playing into a losing ending. Had he resigned on the night I'd almost certainly never have taken a close look at the adjourned position and never found my way to a rather crazy 'rook plus pawn on the 7th against two pawns on the 7th' position let alone bothered to work out whether it was won or only drawn.

I got a lot out of an adjournment, then, even though it never actually happened. Actually, in hindsight, I might easily have taken even more than I did from it. I'll come back to that later. First, we'll take a look at how things developed from the sealed move. 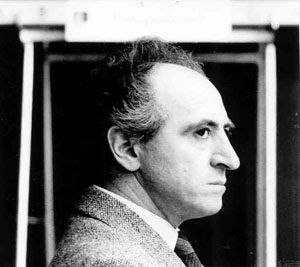 Lev Polugaevsky:
wasting your adjournments will make him cross

It was a London League game played towards the end of April, the first session ending in this position:- 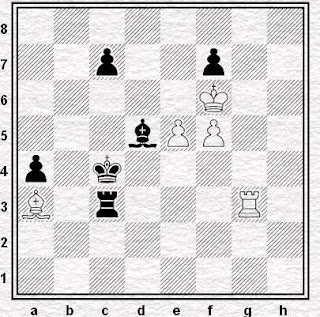 My final move of the first session was ...Rc2-c3 which, since swapping rooks seems to lead to a lost ending (not all opposite-coloured bishop endings are drawn - see BORP? II) and anything else seems to lose a piece, leaves White in a rather sticky situation. To be honest, I didn't see any way out and expected him to resign without coming back for more, but, although that was the way things turned out, there's certainly much more in the position than I'd imagined.

What if he had sealed Rg4+? The day after the game I settled down for a little bit of adjournment analysis and quickly discovered that rather than simply losing his bishop White could say that he was sacrificing it as the start of a plan to give up all his material in order to get his pawns rolling. 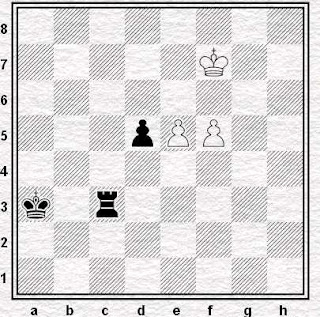 Black to play
What now? My initial thought was that simply

would take care of business, but then it dawned on me that the fact that Fritz assesses the continuation as "-+ (-7.06)" notwithstanding, 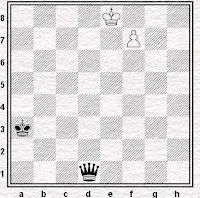 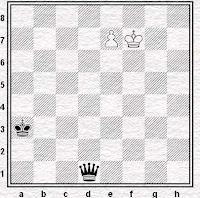 now wins for Black because it's not a bishop's pawn, and 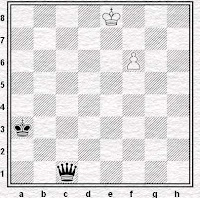 also wins because the pawn has only made it to the sixth rank, so it seemed to me that White would have to try

bringing us to the position at the head of today's blog. 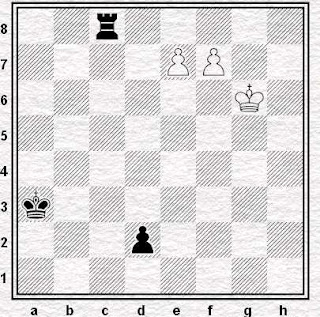 I spent a while getting nowhere with 49 ... d1=queen and queening one of White's pawns in return before I realised that I didn't have to promote straight away and could try 49 ... Rc6+ instead. Unfortunately at the very moment this insight came to me I also remembered that there's a free online six-piece tablebase and that there was, therefore, no need for me to calculate any of this.

On reflection, I now think that it's rather a pity that I turned to the tablebase straight away. OK, I discovered for sure that Black does win here - it's mate in 17 as it happens - which was a relief, but I'd got this far on my own so I probably would have found the concluding moves too. It would have taken longer, but I would have got more out of it in the long run and I could always have checked my analysis later.

Although I still doubt that club match adjournments on their own are the best way to get endgame experience, there's certainly more point to them than last week's post suggested. Yes, the longer sessions of tournament and county games are more likely to be helpful, but if club chess is all we have, adjourning our asses - as Stringer Bell would say and Polugaevsky probably would not - is definitely worth thinking about.


This is the end Index

* For completeness I should add that 47 ... d2, 48 e8=queen d1=queen is supposedly winning for Black, but I didn't notice that at the time and, in any case, my initial reaction on seeing it now is that I'm not sure I'd be able to win it in practice.

Perhaps Fritz is giving us all FLAs, as in the years BF (before Fritz) more games were continued to a second session. Now Fritz discourages us from trying although games may depart from analysis within 2/3 moves. Is Fritz the cause of the decline in league chess? - Joe S

"I stayed up all night analyzing, finally convincing myself and learning a lot about Rook and Pawn endings in the process."