What happened next XVII 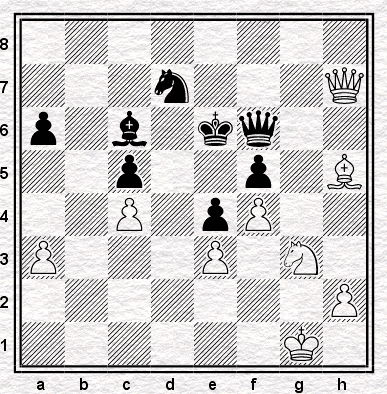 Wednesday's position was taken from the 1980 Olympiad in Malta, the top board game between Lajos Portisch and Tony Miles in the sixth round match between Hungary and England. The game was adjourned here.

In his Secrets of Grandmaster Chess (Batsford, 1997, p. 177) John Nunn explains what happened next:


During the match against Hungary, Miles adjourned in a very dubious position against Portisch. We started analysing the position in Miles's absence. Suddenly Miles joined us, saw what we were doing and advised us not to waste our time as he had sealed 'Resigns'. On resumption, David Anderton did his best to avoid a diplomatic incident by congratulating Portisch on his victory with one hand while attempting to confiscate Miles's score sheet with his other. However, Portisch was not to be denied: he insisted on seeing the sealed move. When the 'Resigns' became visible, he just grunted as if he had expected nothing else. This was one of David's few failures as captain.

Maybe, though Anderton's would not have been the only failure relating to Miles' sealed resignation: neither of Britain's major two chess magazines, in their Olympiad reports, mentioned the incident at all.

The only other reference in print I can find, in English, to the incident is by Nigel Short, in a well-known obituary to which we may return at a later date. Other than that, as far as I know, nothing. Certainly, no contemporary reports.

This even led me to wonder whether the event, which seemed to have gone unmentioned for seventeen years until the publication of Nunn's book, and which I could trace neither in Geoff Lawton's book on Tony Miles, nor in Ray's effort, had ever happened. On the other hand I could see absolutely no reason to doubt Nunn's account, seeing as he was on the team in La Valletta. (Mind you, so was Ray.)

I was aware that István Bilek, captain of the Hungarian team in Malta, had written a book about the Olympiad: so if Bilek mentioned the incident, that would confirm it. I was therefore very grateful to Csaba Gerencsér, who has read the book and blogged about it, who was kind enough to check for me.

Paraphrasing what Csaba sent me: according to Bilek, Miles bombarded Portisch with draw offers during the game. Finally the game was adjourned, but when the adjournment session began, Miles wasn't present, so the arbiter opened the envelope. Together with the England captain he deciphered what Miles had written, which was presumably resigns, as the arbiter awarded the point to Hungary. Shortly afterwards, Miles appeared in the hall, with a smile all over his face. Bilek couldn't help but comment, to the England captain: "Miles smiles - but Portisch wins", expecting that the message would be passed on to Miles.

Chess only had two short reports on the Olympiad, but was able to report that Miles' fifth round game was temporarily suspended because of a dispute in the Kasparov-Georgiev game on an adjoining board, without saying that anything odd happened to Miles in the following round.

The British Chess Magazine, meanwhile, in the person of Bernard Cafferty, reported more extensively and was able to mention problems with transport, accommodation, the playing schedule, crowd encroachment and suchlike. On the Portisch-Miles game, however, there was this:

That's basically it: the opening, but nothing about the finish, save the result.

One wonders why. This was not long after Belgrade and Baguio and questions of at-the-board behaviour were not considered irrelevant by the chess-watching public. This blog has already discussed the lamentable under-reporting of controversies attached to the previous Olympiad, in Buenos Aires: it seems that this habit carried through at least to the 1980 event. Not telling tales out of school was, it seems, the motto by which the chess journalist then worked.

I don't want to deny the existence of real, and understandable pressures, which would lead chess writers to operate in that way. Chess is a small world, everybody knows everybody else and the person you offend today - or their friend - may be the person you wanted to annotate a game for you tomorrow. Nor do I want to claim that other sports journalism didn't operate in much the same way (most football writers probably didn't think it their job, in 1978, to write about "politics" when the World Cup was in Argentina, and plenty didn't) and nor do I want, entirely, to judge journalism from previous decades by the standards of today. A piece of bad sportsmanship like Miles' would certainly be reported on today, but then again it would have to be, because it couldn't be hidden: it'd be all over the chess world within minutes. (Well it wouldn't, because they don't seal moves in Olympiads any more, but you take my point.) It's not necessarily that the hacks are better nowadays, it's that the circumstances are different.

That said: keeping mum did do chess a disservice, when all's said and done, because not only is it a journalist's job to tell people things, but when the press decides that it's better to to tell what you've seen, then it becomes easier to cover up scandals, and that means scandals become more likely to happen. The decade that followed the 1980 Olympiad was, in sporting terms, the high point of English chess achievement, memorable for anybody who was part of it, or followed it. But it was also a time when bad things started to happen, and one wonders how much the culture of English chess, including its journalism, contributed to what happened next.


[Thanks to Angus French, Csaba Gerenscér, Jonathan Bryant, Mark Weeks and John Saunders.]
[What happened next? index]
Posted by ejh at 7:55 am

Blogger had some kind of power outage this morning and afternoon - hence the post only appearing now.

Apologies for that. Hopefully we'll be back to normal tomorrow.

nor do I want, entirely, to judge journalism from previous decades by the standards of today

You don't have to, really: just compare the BCM to CHESS at the same time. BCM clearly had a policy of keeping it zipped. CHESS didn't. Things definitely improved under Bernard Cafferty compared to the (end of the) Brian Reilly era, but the problem certainly didn't go away with Cafferty becoming editor.

Bad sportsmanship - no, that would be Lombardy sealing 'Good Morning Arsehole' in a game against Fedorowicz.

I've heard the story, but is there a source (reliable or otherwise) for it? Also, as they were both Americans, wouldn't "Asshole" have been a more likely rendering?

It's perhaps worth explaining to non-chessers why this is considered bad sportsmanship. I presume it's because it caused Portisch and his team to waste an evening analyzing the position while Miles got a decent night's sleep. But I guess this means that it ought to have been equally bad sportsmanship for Miles to seal a move with the intention of resigning in the morning.

In the world of go, Minoru Kitani's use of a forcing move as his sealed move against Honinbo Shūsai in a 1938 match was considered so unsporting that journalist Yasunari Kawabata was able to spin the incident into the novel The Master of Go, where it stands for passing of an era.

I must admit, it had never occurred to me that non-chessers might be reading our blog. Still, if you are one such, then welcome.

So, the issue about sealing: "resigns".

Perhaps to an extent you're right about Portisch and the Hungarians spending a night analysing a position that will not be played on, but perhaps it wouldn't have cost them that much effort. After all, if the position was bad enough for Miles to resign, it probably wouldn't take that much work (adjournment analysis or not) to win it.

Perhaps more of an issue was the fact that Portisch would have had to go back to the playing hall the following morning to play the game on. This would mean an early start - usually not welcomed by chess players - for no reason. It would also mean hanging around until the afternoon for that day's round.

Getting to the tournament hall was not necessarily a small undertaking. Players could be housed some way from the venue. This was often the case at Olympiads in particular because of the large number of competitors (though whether it was the case for Miles-Portisch, I don't know).

Clearly it's a needlessly anti-social thing to behave as Miles did. I'm not sure I see much difference between reading "I resign" and "good morning arsehole" in those circumstances. The second is very much included in the subtext of the first.

I must admit I know absolutely nothing about Go. I'd be interested to know why sealing a 'forcing' move was so frowned upon.

In go, "forcing" moves create an urgent situation locally on the board, for example by threatening to capture a group, but they can be countered by the opponent with a particular move in response. (This response is not forced by the rules, but because other moves lead to unacceptable outcomes.) Good players generally do not play out forcing sequences lightly, because the threat of being able to play the sequence later (at a time of your choosing) is generally more valuable than the result of playing it now.

If you seal a forcing move, then its potential is wasted, but as a compensation, you can predict your opponent's move, and hence the board position at your next move, which gives you an advantage in the analysis of the position during the adjournment (which in this case was two days long). Hence the suggestion that Kitani was unsporting to seal a forcing move. In his novel about the match Kawabata uses the incident as a symbol of the decline of traditional Japanese values.

You can see the position here. Not everyone agrees that the sealed move was unsporting, especially given that Shūsai made full use of his own advantages in the match, such as choosing when to suspend play.

Interesting. Not that we get to seal moves so often any more - and certainly not in international games - but in chess one of the advantages of sealing a move is that you get to limit your opponents choices. Of course the disadvantage is that you might have to seal a move in a position when it's fairly obvious what you're going to play next. Not ideal!

Chessgames.com have a different Lombardy story - http://www.chessgames.com/perl/chessgame?gid=1092917.
Could Lombardy have done this more than once or are we in the realm of the chess urban myth?