This series is now following the fortunes of chess in Broadmoor Hospital which started out, in 1863, as an "Asylum for Criminal Lunatics". We have already registered a number of chess-playing patients (Richard Dadd, Edward Oxford, Reginald Saunderson, Robert Coombes, F.J.C.) and we are continuing now to follow the house journal, the Broadmoor Chronicle, as our guide.
The Chronicle's chess column was a regular feature of the magazine in 1963 and 1964, until it disappeared from view. Then, in January 1967 it popped back up with a piece “For Chess Fans”. And what a come-back! It made the intriguing revelation that in the 1920s Broadmoor had a proper Chess problemist in its ranks, good enough to have his compositions published in the national press. Fascinating, tantalising, and a mystery in more ways than one, as we'll explain in a separate post. In 1967 readers were challenged with one of his “easier problems”. 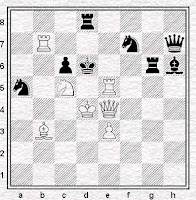 Mate in two.
Broadmoor Chronicle, January 1967.
Originally: The Daily Telegraph, July 1922.
(But please see the footnote before you try and solve it)

Throughout the rest of that year, and into 1968 there were the familiar references, now and then, to chess competitions in Gloucester House (they were no longer called "Blocks"), Essex, Monmouth, and so on; but virtually nothing of chess content until March 1969. Then, for the benefit of any frustrated and tortured soul still on tenterhooks, P.J.W. of Gloucester House gave the solution to the "Broadmoor Problemist" puzzle (above) set a mere two years before.
Anyone now thirsting for a fresh challenge would have found it in P.J.W.'s column, where he offered another fiendish teaser from the in-house Torquemada of the 20s. This time the setting had the black king removed, and would-be solvers stared into the another abyss of feverish nights, and angst-ridden days of labyrinthine retrograde analysis to determine where it should be placed. Solutions would be verified, if recent experience was anything to go by, in 1971. If only, if only, the misprint had been spotted before going to press.
Talking of fiendish teasers, here's a minimalist problem, though not set by their own man, which the Chronicle offered its readers as a treat for Christmas 1972. Mate in two. 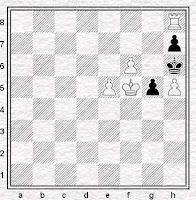 Solution in a couple of years' time - so, back to the story. In March 1969 a one-off item headed “Chess Club” reported a six-board match against Reading Chess Club. Broadmoor chess had come of age and was confident enough to take on outsiders, and that too is worth a second look, later.
The following month the Chronicle announced, poignantly, and with an air of finality, “A.D.N. has left us…he was the life and soul of the chess club.” So, another stalwart chesser hung up his pieces for the last time. But. Not so fast. The Chronicle continued: “We wish him a successful and happy future in the great world outside these walls”. Discharged, not deceased, and (let's hope) still fit to play - on the far side.
Times they were a-changin’ for others, too, as it was also reported from the Recreation Committee of 20 February 1969 that “negotiations are taking place to let patients from the ladies’ wing who are genuinely interested [join the men to play chess]…I have it on good authority that the Physician-Superintendent (i.e. the CEO) is considering the matter in a favourable light…” Not until January 1972 is there a further reference to “the ladies”, for whom "mixed-seating" had now been installed for the chess, and also (the ladies hadn't been hanging about) for bridge; and, it said, table tennis (seating? table tennis?). There was at least one lady though, as we'll see below, for whom chess had a particular attraction.
But we have skipped an item from 1970 that may have some resonance in our bureaucratic world on our side of the walls. An Extraordinary General Meeting of the Bridge and Chess Club had been called – all the more extraordinarily, observed P.J.W., "as it was a baking hot day in the middle of Summer" - to discuss the separation of the two sections into autonomous clubs. The Chairman sternly ruled, however, that as not all members of the bridge section had been informed of the meeting, no formal decisions would be taken. For the time being, then, any sub-Machiavellian scheme the chessers had for sovereign status was thwarted. The discussion, however, meandered on till close of play. “A non-event, but an important one,” B.S. (a chesser, btw) dryly observed. 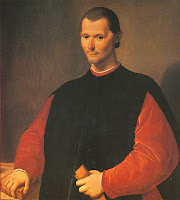 Machiavelli says "He who wishes to be obeyed
must know how to command."
Sound advice, Niccolò.

When the issue was ventilated again in October at the AGM, the proposed split was defeated by two to one, though there were mutterings that it would have been a damn good idea “because of the noise” - but quite what the chessers had been doing to cause such a nuisance is left to our imagination.
In March 1972 one of “the ladies”, Penny Cassandra, as she dubbed herself, insisted that "one is never too young or too old to discover the enjoyment and satisfaction" of playing the game. She went on to offer some “Chess Anecdotes” including a potted history. Unfortunately there was a minor slip in her otherwise well-informed article, and it was seized on by correspondent P. Kelly in Shenley Hospital (on the other side of London -the Broadmoor Chronicle had now spread its wings) who quoted H.J.R. Murray’s history of the game to add ballast to his position.
Ms Cassandra had written that Spanish cleric Ruy Lopez had played in a tournament in 1944, raising a chessical eye-brow or two among those in the know, P.K. included. Penny readily admitted her error, and on the counter-attack claimed Jacobus de Cessolis’ ancient volume to be superior, as a bible of chess, to Murray's, tossing in a reference to Forbes' 1860 History for good measure. Mr. Kelly of Shenley Hospital had clearly met his match. He was not heard of again.
In 1972 the cataclysmic Spassky-Fischer World Championship match didn't pass unnoticed, and from what better vantage point than Broadmoor to assess the psychology of the challenger. In a one-off and prescient piece B.S. diagnosed as follows: “the point is that Fischer has (as a result of declining to take on Further Education, and deciding to concentrate exclusively on chess) an undeveloped personality”. Which proved to be, unfortunately, only too true. 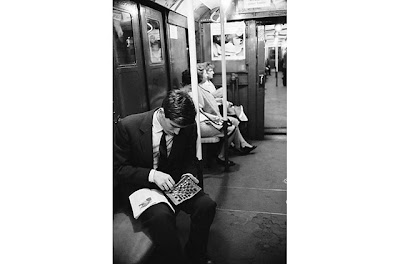 Bobby, lost to the world.

February 1973: the chess column now hits its stride again, relying mostly on monthly problems, and appearing regularly until the middle of 1977 sometimes under the nom de plume “Sartor” (who must have been the snazziest dude on the Block, or just a chap named Taylor). From then on it appears but less consitently, reflecting the halting appearance of the Chronicle itself.
The principal columnist, now P.C.G., was reporting real chess news: Candidates semi-finals, British Championships, Mestel youngest GM ever in UK, and the like. Some of these articles were really quite advanced chess-wise (one was devoted to the theme of "domination" - P.C.G's favourite), and writing in one column about himself, he says that “in answer to PK4 I spent my early chess mastering the French Defence, and after many years I switched to the complicated Scheveningen Variation of the Sicilian.” P.C.G. clearly had form, and one wonders what he did to get it.
Maybe that’s enough edited highlights to give the flavour of the rich vein of chess activity in Broadmoor, as brought to us by the Broadmoor Chronicle. There are some particular episodes yet to be related in detail (the Broadmoor Problemist of the 1920s; G.W. from foreign parts - we mentioned him last time, Broadmoor chessers contra mundum), so there will be more, in two year's next time.
Footnote added after post and in light of comments.
As you will see from the comments box, the diagram above is wrong, and has errors introduced by your blogger. This is as it should be. 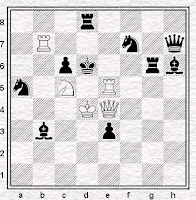 Apologies to all readers. Please see the comments box for further grovelling.
Asylum Index
Posted by Martin Smith at 11:00 am

The second puzzle is rather cute!
I got it by process of elimination.
Would "retro grade analysis" be too big a clue ?
Thanks for posting it!

In the first diagram, shouldn't be bishop on b3 be a black one?

I can't imagine how the first problem ever got published, assuming the position is correct. Firstly, it's cooked as White has two mates in 2, both obvious and uninteresting. Secondly, Black has two unprovided (and unprovidable) checks so White must start with a check.

The second problem is very familiar and much anthologised (and Anon is quite correct). If I could be bothered to walk down the garden to the Chess Palace I'd look up the source.

Just cross-posted with Mark. He must be correct - then the solution is what I wanted it to be in the first place.

Re-arrange the following into a well-known phrase or saying: got/face/my/egg/on.

Here's me pulling the Broadmoor Chronicle's leg for a misprint, and foot I've myself the in shot.

Apologies to everyone; and most particularly to memory of the Broadmoor Problemist, who I have done less than justice to (though I hope to put that right in a later post).

As you can tell, I'm a dismal problemista, and I'm full of admiration for you guys who can not only tell when a diagram is wrong, but which bit should be corrected (Mark and Richard).

I hope this hasn't put anyone off the rest of the series.

Yes - I suppose you want a BP rather than a WP on e3 to avoid the unprovided check.

It's still a pretty feeble problem, though. Very strong key - it's obvious you want to move the Q to threaten Ne4, or, as they say in problemland, Se4, and going to f4 to set up the battery is equally obvious. Now we have crude multiple threats and B can't stop them all.

The second problem should be captioned

I'm looking forward to discovering the identity of the Broadmoor problemist, and to future episodes.