This series began with a chess painting by Richard Dadd who was confined, eventually to Broadmoor, after he murdered his father in 1843. It has morphed into a celebration of other patients ("inmates" in the early days) who, over the decades, played chess there.
A couple of episodes ago, we met East End lad Robert Coombes who, like Dadd, was detained at Her Majesty's Pleasure. Young Coombes was fortunate enough to be discharged in 1912 when he was then only 30 years old. Perhaps he went on, faute de mieux, to another mad-house where he might have served now His Majesty’s Pleasure: the trenches of the First World War. Who knows. 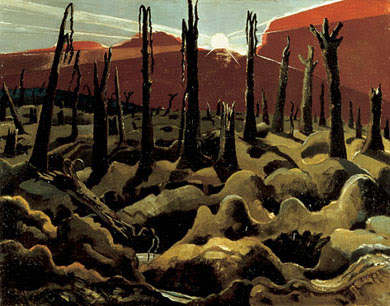 To bring the story of chess in Broadmoor further into the 20th Century your blogger has consulted the Broadmoor Chronicle, a more or less monthly “house magazine” produced by the patients themselves. It ran from the end of the Second War through to the seventies, thereafter appearing less frequently. There was a surprising amount of chess in it, on and off, and from its pages we can follow the fortunes of the game in the hospital, and some of the characters who played it.
Articles in the Chronicle were anonymous, and the Physician-Superintendent (CEO Broadmoor, you might say) had to approve their publication. He seemed pretty relaxed, prohibiting mention only of such things as escapes, deaths, and demands for his resignation (joke!). It was managed by committee of patients, and produced painstakingly on a Gestetner 360 Rotary Duplicator which (on a nostalgic note for our senior readers) looked something like this. 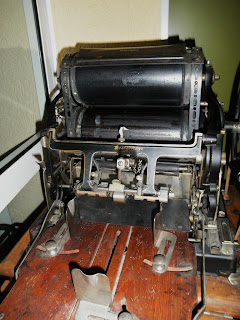 The Broadmoor Chronicle had a run in the region of 500 copies, a modest cover price, and an avid readership throughout the Hospital and possibly beyond.
Although it is the chess that interests us, the Chronicle’s other content was wide and varied. There was the seemingly safe and, to an outsider, trivial. There was the thought-provoking and creative. And there were the saucy bits - in a McGill sea-side postcard manner - somewhere in between.
All in all, it seems so, well, normal. 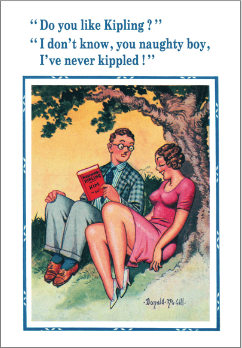 Another nostalgic note for our senior readers

In the main, the organised chess activity was in the “Parole Blocks”, numbers 2 and 5, where a more relaxed regime allowed patients to schedule their own time. Chess had its up and downs, and in the sixties and seventies (the period reviewed in these posts) its driving force was a few students of the game who were a class apart, in terms of chess strength, from the social players, and it was they who ran the matches in and between the hospital blocks, and wrote the Chronicle’s intermittent chess columns.
In the early sixties there were only sporadic mentions of chess (Christmas competitions and so on) usually in the monthly Sports and Social Reports, but a dedicated column appeared in 1963, always on page 6.
F.J.C. (initials only, I’m afraid) was the main-man of chess in the period, organising handicap tournaments where he sportingly offered his less skilled opponents odds such as Queen and move. He published one of these games, played a few years earlier in 1959.
The old anthologies used to show such games, in which the Master, as if blessed by the Deities, prevailed against such an impossible handicap. But F.J.C. was a Chess Hero for another reason: he featured a game where he offered odds of Queen and was himself mated on move 19. Good on him: even if he used the rest of his precious space to give thirty-three moves of analysis showing how he might have won. He was a mere human, after all.
The walls of Broadmoor didn’t cut our colleagues off from the chess world beyond. In May 1963 the Chronicle reported on the Botvinnik - Petrosian World Chess Championship match, complaining that although “it is the hardest struggle in the way of sport....[chess] rates a fraction of a column in the Times and nil in most other papers” (the usual story, of course).
The Chronicle’s own assessment of the match was downbeat: as “most of the games result[ed] in draws” it was “less inspiring than [other] recent battles e.g Botvinnik and Smyslov”. Indeed there were fifteen draws in the twenty-two game match, in which Tigran Petrosian ran out winner with 5 wins and 2 losses. 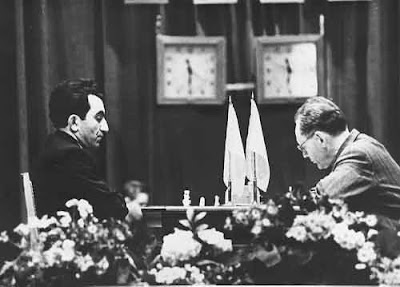 Petrosian and Botvinnik in 1963 - before digital clocks

Fifteen draws there may have been, but also a whiff of controversy. It concerned Iron Tigran’s 41st sealed move in the 5th game, and if you will permit a degree of dramatic licence the story runs as follows.
Chief Arbiter (and sometime Brixton Chess Clubber) Harry Golombek opens the envelope and plays 41. Kf8 on the board. Trouble is: Kf8 is illegal. The habitually undemonstrative Botvinnik, on the ropes in the game, can’t believe his luck. Though such behaviour is frowned on in the classrooms of the Soviet School of Chess he leaps to his feet, punches the air and claims victory. Iron Tigran curls a lip in disapproval. Harry rubs his eyes, and peers again at the score sheet. Now, it is well known that on the board Petrosian liked to camouflage his intentions by adding extraneous flourishes to his play. Apparently, and unknown to our Harry, he would add confusing embellishment to his script as well. Our man gets it at last. Looked at properly 41.Kf7 was the right (and legal) move. Chief Arbiter Golombek adoubes adroitly.
Iron Tigran curls his lip again, this time in approval. The Patriarch, deflated, disgruntled, and now seated, demands a face-saving photocopy for graphological post-mortem. Without troubling his lip further Petrosian wins in short order.
And if that, even with my lame effort to pep it up, was the best they could do for drama, then verily the Chronicle (and the Times) may be forgiven for leaving the whole anti-climax unreported.
The chess column maintained its internationalist outlook with a “test yourself” exercise giving, as a source, a book by Euwe and using, perhaps to the bemusement of its readers, German notation. This suggests the item was by foreign-born G.W., an interesting figure in Broadmoor life (chess and otherwise) to whom we shall return. In September 1963 the Chronicle gave a game between F.J.C. and G.W. himself, again from 1959. Not GM stuff, maybe, but it compares favourably with the action on the lower boards of any club match.
Evidence of an inextinguishable urge to play came in the summer of 1963 when a correspondent complained that “there have been no chess or bridge matches between blocks 2 and 5 this year, perhaps someone could start up some interest again”. In fact, to leap ahead of the story, the 2 v 5 rivalry did resurge, run for a several years, only to fall away around 1973. Fast forward to September 1978, Winter Activities Planning Meeting report: "Hywel D. said there used to be an inter-house chess competition....and he wondered if they could be re-instated." September 1979: "Wishing everyone luck in the internal chess competition," and the wheel of history wound slowly forward to whence it started.
To get back to 1963: Grandmaster game scores appeared occasionally (Tal v Olafsson; Fischer v Gligoric - serious chess) with analysis certainly culled from one of the chess magazines, invariably signed off by G.W., and the column ticked over regularly well into 1964. Then, in June that year, it disappeared…… bursting back over two years later in January 1967...... and we'll pick up the story there, next time.
Notes.
The Hospital authorities have deposited The Broadmoor Chronicle, and considerable amounts of other material, at the Berkshire Record Office for research purposes, and we should be extremely grateful for that (and to the ever-helpful staff at the BRO), though the Hospital has a seemingly blanket ban on publication of images of the Chronicle, even where there is no patient reference, which is a bit frustrating. See this about other problems that beset researchers into Broadmoor history.
The Petrosian - Botvinnik 5th match game is here. Apologies to all parties for taking liberties with the sealed move episode, which is discussed at length in the thread at the link, giving also Botvinnik's account of the affair.
The Paul Nash is in the Imperial War Museum.
Check out the series at the Asylum Index.
Posted by Martin Smith at 11:00 am