Thank you Sir, can I have another? 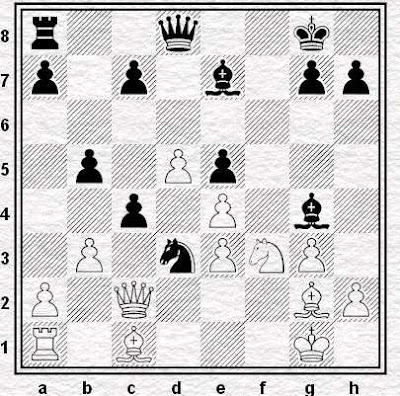 The London Chess Classic begins on Saturday and the Open being run alongside the main event has got quite a field. A quarter of the 200 entrants are titled players. 13 Grandmasters, 22 International Masters and 16 FIDE Masters! Your correspondent expects to be employing Jonathan Rowson's line - "Today I learned" - fairly often.

In twenty-five years chessing I'd never played in an Open tournament until this June, but The Classic will already be my fifth. I'd been doing OK without achieving anything special, but the fourth, at Imperial College a few weeks ago, didn't go well at all:-

Round 2:
My opponent didn’t turn up so I was re-paired Black against a 197 who happened to be loafing around the tournament hall – lost.

Round 5:
Obviously the last thing that you want when you’ve scored +0 =1 -3 is to be paired with a 190-graded thirteen-year-old, but Isaac Sanders is who I got – lost.

My haul for the weekend was a solitary half-point and a TPR of 144 or 151 if Round4Guy plays at the same level for a whole season. Fun it most definitely was not. 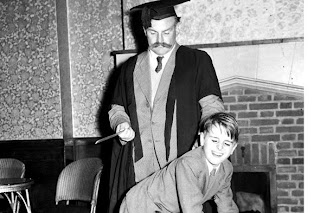 Enjoyable, no, but at least the beating I took at Imperial College seems to have done me some good. I played another six games over the following two and a half weeks and, even though I had Black in all of them, I scored +3 =2 -1 at 189 – seventeen points above my published grade.

My first game after the IC Open was a club match at Guildford the very next day. It reminded me of the Simon Williams' Play Like Tal DVD which I’ve been watching recently . Not that I was playing like Tal, of course. It's just that I seemed to have become temporarily infected by the old Latvian’s taste for creating chaos on the chessboard. It makes a change from Berlin Endgames, I suppose

The DVD is structured around Tal’s most interesting games. You follow the action and every so often you get to choose from three candidate moves. If you get it right the game continues. If you get it wrong Williams tells you why and the DVD takes you back for another go.

It’s an interesting concept and I suspect ‘thinking practice’ like this is one of the most effective training methods you can adopt if you’re trying to improve. Anyhoo, I’m going to steal the format today for the position at the head of today's blog which is taken from my Guildford game. It’s Black to play and I’m going to offer you three choices:- 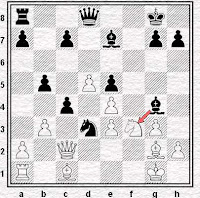 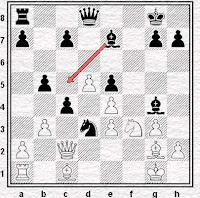 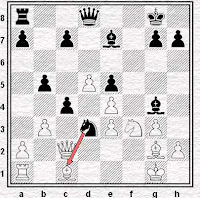 Not so much Play Like Tal as Play Like an S&BC Blogger. If you want a clue, the game appears below and although I think I might have made the right choice I suspect it was for the wrong reasons.

Photograph from Brian Eley parentdish.co.uk
Posted by Jonathan B at 8:00 am

Is this post incomplete? It's missing the three sub-posts for the choices of move. "So, you have chosen to play 18. ... Nxc1? An interesting choice, but not in the style of a true S&B Blogger."

Anonymous: good point although the responses on the original are often more amusing. One errant suggestion of mine resulting in the recommendation that I should go drink a can of red bull because I obviously need to wake up!

I haven't got the original DVD but I did enjoy Simon's putdown on the trailer for a particularly passive move: "This is Play Like Tal, not Play Like Petrosian!".

[btw, I'd buy "Play Like Petrosian". Which modern-day GM should do that one, do we think? Arkell?]

I shall, for the third time in a row, miss the Classic despite being in the country at the time. Bah.

Oooh, a nanosecond ban. I should throw my toys out of the pram and insist on all my responses' being deleted from your entire blog.

Oh wait, no, that would be a silly thing to do.

"Photograph by Brian Eley"?! Oooooh, I see what you did there. Tsk!

And what is the latest on Brian Eley? Is he out and about...? Not a pleasant thought. Maybe News International should get involved.

Let us hope not.

You know, some have suggested that CJ invited RDK to the opening ceremony at Sheffield because it was the 40th anniversary of his win in Blackpool and he - CJ - simply didn't know the history.

Well indeed. For certain there would be more complaints from parents than CJ's t-shirt provoked...

The open now has 227 players,which is far too many in my opinion and is a bit of a mess.
Surely if any of the bottom 50 players happen to play one of the top 50, a lot of them would not want to waste their opponents.

I had considered this line and rejected it, trying to get an 'opposite coloured bishop attack' going. It seemed reasonable at the time but it didn't go anywhere. Also, I'd missed that Black has ... c3 after the queen recaptures.

Think White's going to struggle to get his bishop into the game then.

227 is a large tournament by recent British standards. It's only medium by comparison with some of the continental opens and a tiddler by comparison to Islington 1972 and one or two others of that era.

It's not going to be accelerated either, so I learn the drawbacks of a deflated rating, which is to face the likes of Mark H, Simon W, or equivalent in the first round.