On the day of my fifth birthday, I ate all the chocolate fingers from my cake, and then redecorated the entire lounge with them just as my friends arrived. You can expect much the same today here on the S&BC blog on our fifth birthday: a burst of excitement from me, soon turning ugly in public once the comments come in. Maybe. 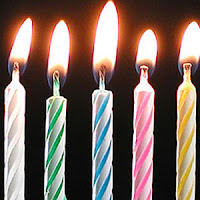 Yes, it all kicked off five years ago today with a post where I tried to assess the scale of the impact our new little corner of the internet was likely to have on the chess world:


It's the news the chess world has been waiting for.

No - not that Fischer has returned, and will face an unretired Kasparov, in an unlimited match. No - not that The Master Game is back on BBC2. No - not that Hydra has created a 32-piece tablebase that proves once and for all that 1. g4 wins outright, whilst everything else is a draw. No - it's not the low-down of what Kramnik was doing in his toilet after all. No - Wood Green have not lost a London League match.

So what's changed since then? Well, a Fischer-Kasparov rematch looks even less likely, to the relief of M.Adams everyone's forgotten about Hydra - although maybe Houdini is about to pull off the same trick, and to some at least Kramnik's toilet antics remain a mystery. But Wood Green have lost a London League match, albeit with no thanks to any of us.

Still, it seems to me we have a fair bit to celebrate: from shining lights into the murky realities of the chess world to investigating the place of chess in art; from featuring entertaining blunders to highlighting local brilliancies; from the bliss of favourite moves to bitter realities of red pills; from chess in bad book covers to chess in great literature; actually - stop me. There's too much to even begin to list or classify.

So: let me just say instead thank you to my fellow writers for such an interesting five years, and invite our readers to let us know in the comments how they expect our next five years to shape up. The Grob proven a forced win anyone?
Posted by Tom Chivers at 10:01 am

I think it's outstanding. If it were simply about chess, as played, it would be good no doubt, but not excellent. Indeed it might become tedious.

What makes this blog is the variety and inventiveness of its contributors. I don't know where else I could have learned about chess in art, for example. Nor about the Interesting French Exchange :-)

The blog also publishes suitably incendiary material from time to time. And it likes to pick a fight, usually in a good cause.

No much point trying to compete with it in its own terms because it can't be improved upon. Those of us who blog must carve out different niches.

To the next five years!

Many happy returns! I read the majority of the S&BC blog posts (none of the chess in art ones, I'm afraid - I'm such a philistine) and always find something to inform/entertain/make me laugh.

I suspect that the Chess In Art pieces may be the least read of our postings.

I also suspect they'll be the ones that are still read when everything else is forgotten.

Yes, congratulations. Really an excellent entertainment. Every club should have one.

Thanks. (I should note, for the record, that though this blog originated within Streatham and Brixton Chess Club, it is actually independent of that institution, which bears no responsibility for the contents.)