I have Malc Pein to thank for this one. The commentary room of the British Championship in 1990, a snippet of chess knowledge passed on: a bishop totally dominates a knight when they are separated by two squares. Trivial if you already knew it, but I didn't and, twenty years ago though it might have been, I've never forgotten that moment.

I came to learn that Malc's* bishop/knight aside was one of those little nuggets of wisdom that turn out to be extraordinarily powerful, today's game being a case in point. More of that in a moment. Right now I've got a move to seal. 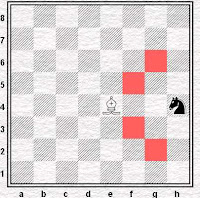 It looks like it should be relatively straight forward. I'm a pawn up, I've got a bishop on an open board and what's more his knight is miles away from the action. A simple case of mopping up, then?

Objectively speaking that might be right, but nothing's really that easy in chess is it? Especially not when you've been playing for three hours and you're on the verge of what will be a notable scalp. Chuck in a history of ballsing things up at the last moment and things start to look a little trickier. 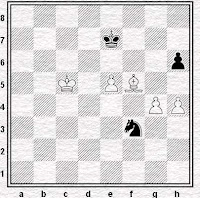 Initially I didn't fancy being just one pawn up with everything on the same side of the board. It was only after failing to find anything else that I returned to this position and discovered that it would actually be very good for me. 42 Kd5 leaves Black in all sorts of trouble since after 42 ... Nxh4 I have the simple 43 Be4! leaving his knight without any moves whatsoever. 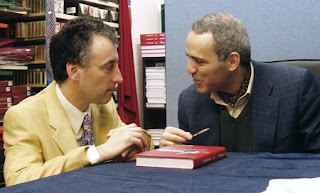 Black resigned without resuming, so this game turned out to be another adjournment that didn't happen. It's a shame that we didn't get to 'finish' the game, but I got a lot of pleasure out of sealing that move. Game in x, then wind the clock back y minutes and play to the end has it's advantages, but if that had been what we we'd had here I wouldn't have had the time to think things through in the same way. Maybe we would have ended up in this position anyway, 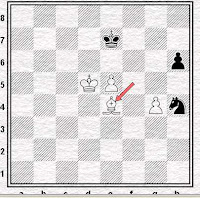 but I can imagine it happening with me 'blundering' a pawn and only realising at the last minute that it couldn't be taken. The result might not have been any different, but it wouldn't have felt even remotely the same.

Good analysis, it seems to me.