Broadmoor Chess Club versus The World

The last few posts in this series have been piecing together the story of chess in Broadmoor high-security psychiatric hospital since it opened (originally as an "Asylum") in 1863, and most recently we've enlisted the patients’ house journal, the Broadmoor Chronicle, to help us.
In this episode we are going to look at the matches that Broadmoor Chess Club started playing (at home as you'd expect) against local clubs in the late sixties into the seventies. It's interesting to see what they got up to; and it's not. What's remarkable is that it's so ordinary, chess-wise. And it's not.
The first mention of a chess match against outsiders was in March 1969 when Broadmoor took on Reading CC over six boards in the Norfolk room. Here is the score card:

ADN (from Essex house) won on top board, his swan-song perhaps, before leaving for the “world outside the walls” as we saw last time. GW gets a mention in the Chronicle's report by DGT: “he strove to out do his man, and won a most valuable point for our side”. DGT came clean with something we could all admit to at one time or another: “I for one, played like a zombie”.... 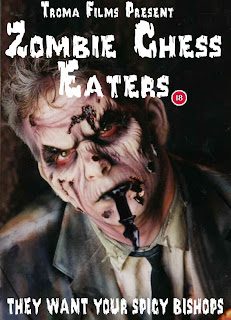 Play like a zombie, lose like a zombie... and this one was nailed by Vic Ballard, who is still playing for Reading Chess Club today. I managed to track Vic down (the only survivor of the match that I could find) and spoke to him, hale and hearty, a week or so back, and he generously provides us with some recollections of the match over forty years ago.
Vic particularly remembers all the hanging about as the Reading team went through security, and then even more in the playing hall until the patients were brought in, one by one. The visitors were told that their opponents' play might be affected by their medication; but even if that were so, it didn't inhibit their hospitality - the host team prepared copious refreshments in an adjacent kitchen, which were then plied liberally to their guests.
Vic also remembers that a couple of warders, burdened with massive bunches of keys, paced up and down until the session ended. The patients were then called away, block by block, and only when they had disappeared were the visitors allowed to leave to be counted out through security.
Not your typical away match.
In the February 1969 Chronicle, Broadmoor Chess Club posted its ambitions for further matches: “St. Benedict's school want to send a team on Saturday 22 March, DHSS chess club may be able to come and play us some time, and there is also the possibility of a Board of Trade team coming down from London some time”.
There is no record of matches against the last two (did the civil servants get cold feet?), but here is the score card for the St. Benedict’s match:

A thumping victory for Broadmoor (and, no that's not some twist on a "3-1-0" scoring system - each pair slugged it out over several games) that attracted an ever so slightly smug comment in the Chronicle: “better luck next time St.B’s”. This time GW won on top board for the home side, and the rest of the team cleaned up too . But perhaps it is significant that when the plucky, but out-gunned, pupils of St. Benedict's called up Brother Oliver (a teacher presumably) the rout was stemmed. But let's not begrudge Broadmoor their only recorded victory. Although, as for the "next time", please pick on someone your own size....

....which they did – in shape of local club, Bracknell Precision (a works team), who put Broadmoor in their place.

This was reported in January 1970, along with the following rather rueful, even critical (and anonymous) comment: “As we all trooped back to our respective houses at the end of the evening I could not help suppress the feeling that some of the interlectual (sic) “so and so’s” we have among us have been shown up in their true colours…Admittedly Bracknell fielded a reasonable side, but is was not all that strong...” Oh dear!

And there had already been some serious soul-searching by Sandy R in the December 1969 issue, noting that Broadmoor lost all its matches on the previous season, and quoting “a friend’s” suggestion (and he wouldn’t be the first to float this one) to play in reverse order of strength.

Indeed, in 1970 Broadmoor lost yet another one – to Richmond Chess Club who played there several times, as we learn from information kindly furnished by Richard James.

This is an extract from the Richmond & Twickenham Chess Club Newsletter No. 4 (probably November) 1970, written by the editor, Alan May:

Suggested friendlies by other clubs have met with a discouraging response until this season when a letter was received from the Broadmoor Hospital. Richmond had been suggested by the Surrey authorities as suitable opponents for the in-mates chess team. (I have my own dark private thoughts as to why Richmond was selected!)……

…. Philip Poyser took charge of the team and the match was played at Broadmoor (of course) on Saturday 24 October……..a good time was had by all. Playing conditions were ideal, a plentiful supply of food and drinks was provided and all our team were released about 7.00 pm…..

……Well, we won. In fact we won 9 - 1 with Phillip Pratt doing the decent thing to encourage the opposition. I gather that we were assured of a marked psychological advantage before the kick-off. As the drawbridge was lowered to receive our party of gladiators, a patient was heard to remark that we looked fantastically strong. The herculean performance of the team undoubtedly strengthened this belief but despite the one-sided result we have been invited back and it seems likely that a return fixture will be arranged some time next year.

Indeed, this was to be the start of run of annual fixtures against Richmond.

1971 saw Broadmoor take on Basingstoke CC. Although marred by no-shows, the match was close, the home side (as with their football and cricket teams, now known as "Patmoor" - surely a cosmetic, and thin, disguise) going down 2½ – 3½, with Günter again making a draw on board 1.

On into 1972 and another match against Richmond, which merited a passing mention in the Chronicle. It saw Richard James in action (he played in them all) and remarkably he still has the score of that game, as well as some from other years. He played our old friend GW, who revealed himself to be one Günther Wiora. Restoring him his full name suddenly makes him a real person. Here is the game:
As for matches against Richmond there were, as we noted, several over the years, and here is another extract from the Richmond and Twickenham’s club’s newsletter, of June/July 1975, headed "Broadmoor Matches" and written by Phil Poyser, also a veteran of the initial 1970 encounter (and who will get another, rather unexpected, mention later in this series):

On the afternoon of Saturday, 22nd March, a team of 9 Richmond & Twickenham players met at the Rising Sun (Schooner Inn), opposite Marble Hill Park, and journeyed in three Club members' cars to play a match against a team of Broadmoor Patients in the hospital at Crowthorne, Berkshire.

This match has been an annual event since 1970 and this was the fifth of the series. An earlier fixture had to be cancelled by the Hospital on the day before owing to staff problems. Although we have always won these matches (so we should with all our practice ) the patients take defeat well and always ask us to come again. We play in a comfortable well heated room and generous refreshments of tea, soft drinks, sandwiches and cakes are provided.

The visits, Phil noted, were much appreciated by the patients, and their attentiveness to the needs of the Richmond visitors, offering copious quantities of tea and cake, had now become the stuff of legend. 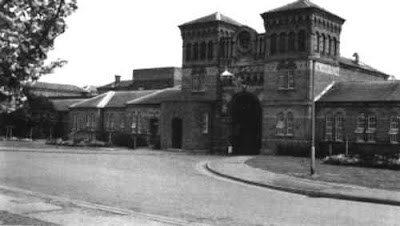 The matches against local teams petered out for some reason; but judging from the keenness of the patients, and the willing enthusiasm of the visitors, it must have been some objective impediment: attrition of players on the Broadmoor side, say, or a bureaucratic hitch. In this connection there was a report in the Chronicle of 1972 of a meeting of the Recreation Committee, which may be germaine. Dr McGrath, the CEO, was present and asked that “arrangements for outside teams...be made formally by an official here…in order to establish a legal relationship with visitors for legal protection.” A straw in the wind, maybe.
We'll end on this recent reminiscence by Richard James, echoing the themes of fellow chess visitor Vic Ballard:

What I remember - the warders (probably not the right word as they made it clear to us that Broadmoor was a hospital, not a prison) with enormous bunches of keys: the matches being the most enjoyable of the year because of the refreshments and the fact that there was no pressure to play well: remembering that we probably shouldn't ask our opponents what they were in for: making very sure we didn't leave anyone behind as they could well believe that any of us were just as insane as them. Then we (or at any rate I) started to think about what it means to be sane or insane, normal or abnormal. We were a pretty eccentric bunch; it was just that our insanity wasn't criminal.

A salutary thought.
So. Well done Broadmoor Chess Club! Chessing like the rest of us; striving to win, against the odds; and if not winning, then enjoying the game and the society - and the tea and the cakes. But chessing under lock and key.
And welcome to the unanonymised Günter Wiora, about whom there is a bit more to say, next time.
Acknowledgements
Richmond and Twickenham Chess Club is here, and a special thanks again to Richard James, and Vic Ballard.
Thanks to ejh for this on St. Benedict's, depressing as it is.

Asylum Index.
Posted by Martin Smith at 11:00 am

Which, dear reader, is exactly how the captain responded to S&BCC's recent 11-0 + 1 adjourned result against Wood Green!

Not that it matters, but I note that you spell Mr Wiora's first name Günther and Günter.

Coincidentally, I heard from Alan May the other day, for the first time for more than 30 years, concerning the DJ Groen trophy, which some readers might remember. Alan gave up chess on marrying a bridge player, but has returned to action in the last few years playing for Dorking. There was another Richmond trophy around at the same time, the Bodycoat Cup, which was used for the 2nd division of the club championship, so I was inspired to do some research into Groen and Bodycoat, which produced some interesting results.

Thanks for putting the record straight, Richard.

No problem. And I should have written 'at the time', not 'at time time'! Looking forward to reading more about Mr Wiora in the next episode.

How interesting that they played a school. I can't imagine that would happen now. Just think what the Risk Assessment form would look like.

More to the point, imagine what the front page of the Daily Vile would look like.