Annotation for the Masses, Not Just for the Ruling Classes

I recently found myself in a conversation about the nature of published game analysis, particularly how it can become an outlet for the annotator’s frustration or ego. If the scribe has won, it’s easy for them to slip into the mode of the crowing jackass. If they’ve not done as well as they expected, the sob stories can flow like the BBC3 primetime schedule. You know how it goes. 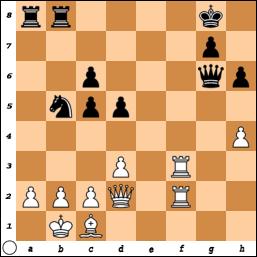 Barry God - Geoff Rabbit
Obviously I’m completely winning here. Black’s king is far too exposed and his threats against my king are illusory. My opponent had been sipping noisily from his beer can for a while. He looked like one of those poor people I see from a cab window on Shepherd’s Bush Green. You know, the ones who’d be clamped for parking without a permit if they were a Ford Escort.
Unfortunately, with one move to make before the time control, he unleashed a belch that brought back memories of the time I accidentally set foot in The Rocket on Euston Road, thinking it was a gastro.
40. Rg2??
Obviously, because I’m a good player, I’d intended to play c3 first. The cretin had put me off.
40… Qxg2 0-1
I shook his hand swiftly, declined a post-mortem and headed straight for a shower.
Geoff Rabbit’s going to be pretty miffed when he reads something like that. Of course, something as blatantly character-defaming is unlikely to show its face in a serious publication. The other side of the coin is when no personality is displayed at all.
Having titled players annotate their games for a publication is a big draw and can be very lucrative. However, such games are likely to be victories. The chess pro’s ego is very fragile. One of the many impressive things about 7 and Zebras by Jonathan Rowson is how many games he includes where he’s lost. After all, as my primary school teachers told me, you learn more from your defeats.
I suppose it’s a question of what published annotations aim to achieve. If they aim to educate, taking a personal approach is necessary. Style is subjective. If they aim to entertain, the actual chess content takes second priority. The personality of the players is given greater exposure and the game is humanised. Both of these approaches are very readable.
The third approach is sadly very prevalent. Many annotations are soulless extensions of a player’s ego and have no ascribable value or depth. Many publications seem intent on fellating the egos and wallets of the elite, while giving little thought to the demands of the readership. Many of the best sporting pundits competed at a level below the elite, or didn’t compete at all. Jonathan Agnew, Peter Jones and Simon Barnes spring to mind. Of course, many have done, notably Martin Brundle, Matthew Syed and John McEnroe. I’m not suggesting that all very strong chess players write like automatons, but it’s undeniable that many do.
A good chess annotation should be able to identify and evaluate many concepts, including those of a more psychological nature. It should tell a story. Character, setting, plot. It should reveal the inner turmoil that comes with making a decision. Conflict. It should describe those breathtaking moments of realisation and discovery. Anagnoresis.
And then a king dies and the pieces are put in the box for another day. Catharsis.
Posted by PJM at 8:00 am

I think Karpov annotated games to deceive his future opponents as to his approach to and understanding of chess.

Weren't able to beat him then, Tom?

Years ago I used to really like Martin Johnson writing about cricket (in The Independent I think). Later he went on to golf which I don't bother reading about.

I’m completely winning here. Are you? Can't see it myself.

Hello Alex Anonymous. That was pretty much my point. The position is unclear at best, but some players let their ego get in the way of some kind of objectivity.