The Other Talent of Bill Hook

You may have read this book already, published in 2008 by NiC, or one of its many enthusiastic reviews in the chess press. It’s the memoir of Bill Hook (1925-2010), chesser, gambler, photographer and artist. It's worth another look, as it gives us the subject for this episode in our occasional series on chess players with the other talent. 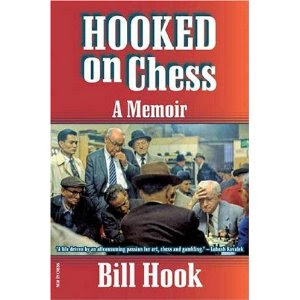 You can also get edited highlights in an hour long interview with Bill Hook, by John Watson, here.

Bill Hook's chess took off when he acquired a serious habit in his late teens, then frequenting New York's chess club scene to get his fix, principally at “Fisher’s” (so-called after its proprietor), which continued as the “Flea House” (self-explanatory) until its demise. In the book we meet the characters he fought there across the board, and those he befriended off it. The superb photo composition on the front cover (as all the others in the book, one of his own) captures the ethos of the joint and its Chandleresque habitués: just don’t ask them to smile for the camera.

It’s the kind of place that would lend atmosphere to a film, and indeed it did: Stanley Kubrick’s 1956 noirish “The Killing”. Kubrick himself was a notorious chess hustler in New York, apparently, and chopped plenty wood with Hook.
Even though Bill was an American citizen – almost archetypically so: making his own luck in a Wild West sort of way - he played for the British Virgin Islands. That’s because he lived there, on and off, for 42 years, on the tornado wracked paradise of Cooper Island. And in case you wondered, like me, BVI is here:

BVI (pop. 20k) improbably, and regularly, fielded a team in the Olympiads, playing in its lower reaches, and it was a proud achievement when Bill Hook won the Board One medal in 1980. He played in 17 overall, with Jon Speelman dubbing him, in 1977, “the Father of the Olympiad”.

Art, and latterly photography, intertwined with chess throughout his life. TB prevented active service in WW2 and emerging from treatment, and subsequently, he was awarded several grants enabling him to develop his creative talents.

Chess and art knotted together in one piquant moment when he played and beat fellow chess artist Marcel Duchamp in 1951, even though when asked, Marcel claimed, a little disingenously perhaps, that he was on a "long vacation" from his other talent.

Duchamp had himself also been an international Olympian: for France, before the war. Here is the game.

In the interview Bill elaborates on the development of his art:


I started in a very orthodox manner, doing a lot of realistic subjects, and I gradually introduced abstract elements…towards the end I was entirely abstract which I felt was much more creative than simply rendering a scene realistically...which I didn’t feel was creative enough.

Chess remained one his themes even as his style evolved. Here is a severely representational rendering of players and the struggle. It is based on a photograph, surely, but his artist's eye has stripped down the scene and its tonal contrasts to the essentials. Interesting enough for its three-quarter orientation, it also, as so often in chess art, calls on the hands to do the heavy lifting of the emotional load; they aren't there simply to move the pieces, so to speak. In Bill's painting they steal the scene. That's Pal Benko on the right. 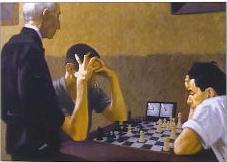 And this is a sub-surrealist bit of whimsy evoking opponents in battle (note those hands again). 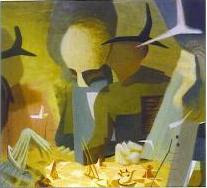 But that can’t really be the abstract style that Bill championed in the quote above. A better example would be this: 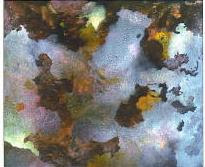 The scale of this reproduction doesn't do it justice, but it seems to be about the contrast of the opaque with the translucent; surface with depth; solid with fluid. If you reach out, your hand might go through it or - put better - into it. Bill was of that trend in "abstract" art that derives from reality - "abstract" as verb, rather than adjective.

He says that his experience of the world under water was his inspiration, and that his method of painting such works was...


…pouring quick-drying acrylic paints on my canvas which lay on the floor, employing a spoon and palette knife for control, (no brushes) and cultivating thin translucent washes while building up richness of colour and texture…taking months to complete a canvas.

If I understand the chronology of his story correctly, this development in Bill's work was from the 60s onwards, though in truth the expressive possibilities of pouring stuff on the floor were already well-known from Jackson Pollock in the 40s.

Bill Hook turned away from ambitions of an artistic career after early disappointments on the gallery circuit, eventually more or less completely eschewing painting for the same reason. He seemed to have found the camera a more simpatico instrument than the spoon. In the book there are 50 or so photos of the chess personalities of the latter part of the 20th Century into the 21st - from the jejune blandness of the impossibly young Carlsen to the life-etched cragginess of the indestructibly veteran Kortchnoi - and many would stand out in any photographic exhibition.

Bill's treated his subjects sympathetically, and they invariably display positive good humour, reflecting what one imagines was his own glass-half-full outlook on life. Only once or twice does he show us the dark side, as in this revealing shot of Kamsky père et fils (with apologies for the poor reproduction, here and throughout this post). It could walk off with first prize in the psychodrama category.

Bill Hook’s chess photos appeared in the chess press, and his chess achievements were honoured by a special BVI stamp. His paintings decorated several chess venues, including one started up by Larry Evans (who will appear next week), but they seem not to have survived well, are lost or disappeared into private hands who knows where. I could not find any, apart from those already in the book, on the Internet. Which is a shame, as he was a rare example of a modern chess competitor on the international stage (one or two others we'll come back to), albeit by accident of domicile, who was also a first rate artist. 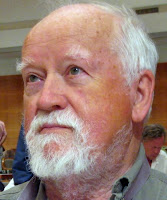 The reproductions in his memoir are testament to his enormous talent – it would be good to see more of his paintings. Can anyone out there help?

Acknowledgements:
Hooked on Chess; A Memoir. By Bill Hook. Published in 2008 by New in Chess. Worth a read! All photos and paintings used in this post are by Bill Hook (except his own portrait which appears unattributed on the web).

Please see this Chess in Art post, and its comments, for more on hands.

I'm sorry Bill couldn't see your wonderful article. He would have loved it. If you would like me to send you some jpegs of his paintings, I would be happy to. You can reach me at hookmimi@yahoo.com

I'd like to thank Mimi for getting in touch. I have been chatting to her, and have pics of many more of Bill's paintings, which is great.