Department of A Likely Story : Richard Desmond and the chess correspondent

So we felt by backing the editor, by putting more money into the editorial on the Daily Star, by looking at the chess correspondent, who was based in Latin America, or the New York bureau, one person in New York, all this sort of nonsense and grandism that surrounded the paper at the time, we felt that by taking a firm control of that we could, you know, get the magazine -- get the newspapers back into profit.

I was following Richard Desmond's evidence to the Leveson Inquiry last Thursday, via the Guardian liveblog, when he made this unexpected reference to a chess correspondent based in Latin America. The Guardian reporter's immediate response was


That, presumably is a joke

and mine, to be honest, was the same: I assumed it was some kind of mythical figure representing snobbishness, elitism and luxury among the metropolitan broadsheet press. A lot of mythical figures like that exist in the contemporary imagination. Not a few of them exist in the pages of Richard Desmond's newspapers. A man of imagination
But mythical or otherwise, he must have meant it, since he said it again shortly afterwards:


I think a lot of these other groups don't really understand that it is a business, and, you know, there's more to life than the chess correspondent based in Latin America.

Well, if you can't repeat your own jokes then whose can you? But is it a joke? Or did such a figure actually exist? Or did some other figure exist, who over the course of a decade has been transformed, in Richard Desmond's imagination, into the bogeyman he brought up at Leveson?

It's not the first time Desmond has made such a claim. Radio Four had cause to mention it last August, which was mentioned on the English Chess Forum:


He fired the paper's chess correspondent who lived in South America earning £60,000 a year.

This, in turn, may derive from statements he made when acquiring Channel Five in July 2010, at which time he made at least two mentions of this transatlantic chess correspondent whose employment he terminated. One was in an interview in the Jewish Chronicle in 2010:


When two companies come together, there will be efficiencies which need to be made. When we bought Express Newspapers, for instance, we were paying £50k for a chess correspondent in Latin America.

while another was in a Sky News interview in which (at 2:30) he says:


When we bought the newspapers in 2000, there was a chess reporter based in South America who was paid fifty thousand pounds a year. So we did terminate his services.

So what, as they say, is all that about? It's hard to believe that even at its most profligate, any British daily paper would have retained the services of a full-time chess correspondent based in South America, which is why, along with the Guardian journalist, I assumed it was a joke. But the repetition of the story leads one to believe that Desmond is at least thinking of something real, even if the reality was rather different to what his memory, or his imagination, says it was.

But what? I can't admit to seeing the Daily Express very often (though my parents used to get the Sunday Express about a million years ago, when John Junor was still alive). My impression is that it used to be written for genteel fascists and is now written for street thugs, which is not remotely the fault of its chess correspondent, one Luke McShane. A very long-term chess correspondent, as I understand it, though I don't know if his period with the paper has been unbroken. I do know that he's unlikely to have been based in Latin America at the time of Richard Desmond's acquisition of the title, since he was then at the City of London School. 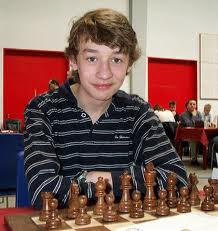 Not guilty
So who? Stewart Reuben notes that Bill Hartston was at the Daily Express at the time, though far from having been dispensed with, he has been there ever since. Moreover he wasn't living in Latin America and for that matter wasn't the chess correspondent: instead, as he related in an interview with this very blog, he was signed up by Rosie Boycott to write the Beachcomber column. 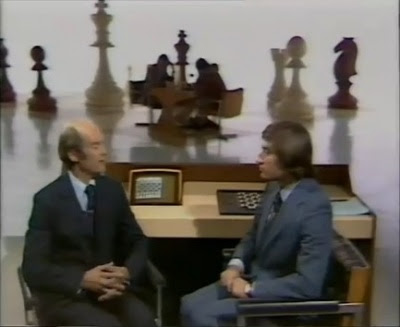 Life in Rio
Intriguingly, though, he does say in the interview that he did write about chess for a short time:


There was a brief moment when The Express had a puzzles supplement and I did some stuff for that but that's all.

The oddity of Desmond's comments haven't gone entirely unnoticed in the media, especially by the Guardian's Stephen Moss. He Tweeted:

He doesn't, however, go on to say who thinks it was. Perhaps he, too, is thinking of Bill Hartston.

But maybe there really was a Latin American-based chess correspondent, trousering fifty or sixty big ones a year for no obvious return. As the late Sir John so often said, I think we should be told.


. . .
As it goes, it's not the first time Richard Desmond and mysteriously expensive chess correspondents have coincided. When I read the following passage from the Leveson transcript


A. I hope so. Frankly, I'd rather get rid of this, you know, prosecute the people that have committed offences and get on with business. And have a proper RCD board of proper business people, legal people...

LORD JUSTICE LEVESON: What do you mean -- I'm sorry, you have to explain -- RCD?

I couldn't help but recall another passage (which I first saw mentioned here) from Docklands Encounter, a 1984 instant Batsford book by Keene and Goodman*:

That afternoon, Keene, Campomanes and Chetwynd assembled at Ivory House, HQ of Strategy International, and then drove to Northern and Shell for their appointment with Richard Desmond and Chris Cottom of Sightline. The meeting was a failure - it quickly became apparent that there was bad chemistry between the two sides. Keene and Campomanes had hoped to be offered sponsorship. Instead, Cottom suggested that he pay his Company a flat fee of £5,000 and, in exchange, his sales force would look for sponsors. This fee would not be refundable, even if no new sponsors were found. The meeting broke up with Keene and Campomanes dissatisfied. Richard Desmond did, however, offer everyone a lift in his gold Rolls Royce (number plate RJD001) and dropped Keene and Campomanes off at the Cumberland Hotel in Marble Arch where Hasan was staying. (p. 17)

Thanks to the reader who supplied me with the passage. But RJD? Must have been written by Goodman. You wouldn't expect Ray to make a lapse like that.

[* Actually the authorship of the book is somewhat obscure since the hardback and paperback editions give different and inconsistent information: it's actually a mess. Other people who are listed as having contributed include Robert Wade, HM Hasan and John Groser. I've gone for Keene and Goodman as the main authors. Thanks to our reader who assisted me with this.]
Posted by ejh at 7:55 am

At the back of my mind is a notion that some of the material written by Larsen (in South America) was also published in the British press. So could it be some sort of combination of Larsen and Hartston that he's referring to?

Unless an interviewer ever presses him for chapter and verse, it's unlikely that the veracity of the story will ever be proven.