Suppose this. Suppose you were working for the New York Times, and you had this article ready to go, all about the impact of continued austerity of the Irish people and economy. But you had to select a photo to head the piece. What sort of photo would you want? 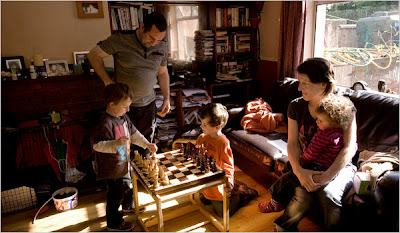 I am thinking of setting up a chess club in Waltham Forest. Any ideas will be greatly appreciated. I do not play chess but want the young people of this area to have the opportunity to learn and I will be learning alongside them. Many thanks
Nina

Also, you might want to try googling Malcolm Pein and his Chess in Schools and Communities charity. It is possible that they might be able to provide some help/advice.

Having had a quick glance at the article, the family shown is in danger of losing their house due to an inability to keep up their repayments. So possibly the photo is showing “Paradise about to be Lost”.

Your interpretation, however, is funnier, as my non chess-playing friends would agree!