The Other Talent of Bill Hook's Friend

Last Saturday's "Other Talent" post looked at the paintings and photography of Bill Hook, who played chess with the best of them in the Olympiads for the British Virgin Islands – that’s after honing his chess skills on the American chess scene, in the clubs of New York (about which, see more in the Kevin Spraggett blog) and in state and national tournaments.

One of his sparring partners was Larry Evans (1932-2010), not only a GM, but a sometime chess club proprietor and blackjack addict, and importantly for the purposes of this series of posts, a minor patron of the arts. That is to say, he bought several of Bill’s paintings (six to eight, according to Bill's memoir Hooked on Chess) in the late 1950s (or thereabouts, the memoir is sometimes a bit vague on chronology).

“Aside from the chess paintings for his club, [Larry Evans] had bought a couple of my student paintings, one of which was a nude of an ex-Ziegfeld Follies girl, who had turned to modelling in her elderly corpulent years. Also Larry once commissioned me to paint a nude of his current girlfriend. It took me three days.”

Unfortunately the chess paintings disappeared when the club eventually folded, and presumably the nudes went West, too. But, en passant, the above passage is significant in showing that in addition to portraits and abstracts, Bill enjoyed another of the great thematic genres of Western art – the nude.

Getting back to Larry Evans: he evidently collected art in a small way and, as if by coincidence, the woman he married (he had met her across a blackjack table) was destined to become a modestly successful artist: Ingrid Evans (she took his surname) – and so we come to the subject of this post. OK, maybe not an artist who played serious chess, but the artist wife of a GM. Which is close. Worth a detour, anyway.

But first a game of chess (one I couldn't find anywhere else on the Internet; though it may be there - somewhere).

Yes, the sixteen year old Larry Evans played and beat the 61 year old Duchamp – which is a nice pendant to the Hook v Duchamp game last time. Unfortunately, I can’t find a score of a Hook v Evans game to complete the circle (but maybe a reader could help). 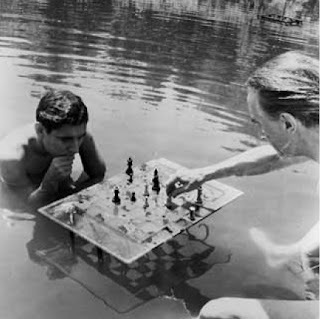 Larry stays cool as Marcel makes waves on the King's side, in 1953.

As for the Duchamp v Evans score: it comes from maybe an unlikely source, an artwork by Ingrid Evans. Specifically, a collage shown at an exhibition in 2009 at Francis M. Naumann’s gallery, in New York, installed to coincide with the publication of his book Marcel Duchamp: The Art of Chess (co-authoured with Bradley Bailey) which we blogged about here.
Here is the work, hung in situ in the exhibition (with startling chess sets at the front - we'll come back to those): 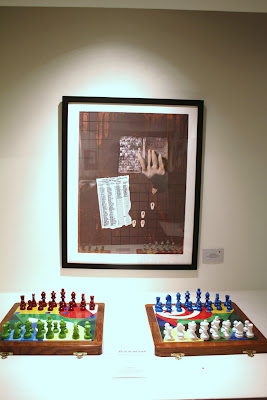 Its full title is Games People Play (Duchamp Evans 1948), created in 2005, and it shows Larry Evans original score of the Duchamp v Evans game (as above, except in descriptive notation). But it was an unflattering game for Duchamp (he lost, after all), and so maybe not quite an hommage.

The other major element in the photomontage is an image of Duchamp’s 1944 work Pocket Chess Set with Rubber Glove. In fact the orginal work (shown at Julien Levy's 1949 Imagery Of Chess exhibition) was lost, but was re-created in 1966 under Duchamp's supervision. I think what we see is a bleached-out photo of the reconstruction, which bore, under the ‘a’ through to ‘c’ files, Duchamp's signature – and that detail makes it clear that Ingrid Evans has, deliberately, montaged it the wrong way round, in mirror image. For some reason, back in 1944 Duchamp, also deliberately, set up his Pocket Chess Set with a nonsense arrangement of the pieces.

The other element is the QGD pawn formation, taken from the first two moves in the Duchamp Evans game, on an 8x8 grid and using modern pocket-set tokens. They appear as the drip of symbolic blood from the wrist of the defeated party (Duchamp lui-même?). This is a close up of the complete work: 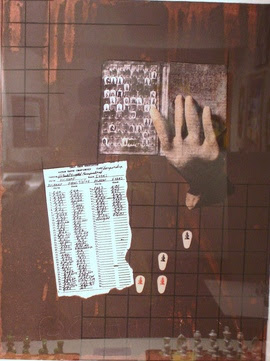 The exhibition had a companion piece (below) by Ingrid Evans hanging nearby: Games People Play (Cuba 1952), which collaged the score of Pomar v Evans in the International Tournament in Havana. Having shown a Duchamp defeat in the first work, this time she shows a draw: albeit in a game that Duchamp didn’t play. The other major element in this one is a photo of another work supervised by Duchamp, of and about Duchamp: Marcel Duchamp Cast Alive of 1967, in which a disembodied head (cast from himself) contemplates a reduced chess board bearing a knight of his own 1918/9 design.
The scrap of a chess position in the upper left of the frame doesn’t occur in the Pomar Evans game itself, nor of course in the Pocket Chess Set (excepting the a7 and b6 pawns); but from what we can see of it, it does at least look like a part of some kind of sensible chess position . 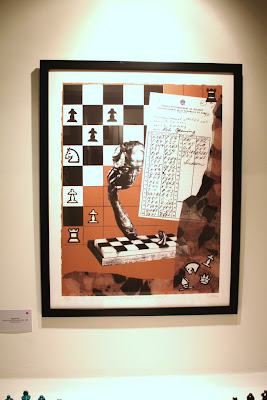 By the way, before we chide the Evanses with accusations of discreet nepotism (suggested by Mrs Evans display of two of Mr E's decent, though not his most distinguished, games), remember that Marcel himself had an artwork made from the score of his own 1928 drawn game with Tartakover (so proud he was of it). Game score as a ready-made art work is a typical Duchamp trope - though this is stretching things a bit. He sold his perspex encased Chess Score (1965) to raise funds for his youth programme with American Chess Federation. Good man.

All very interesting; and Ingrid Evans invites us to get lost in a maze of hidden meanings, false echoes, crossed references and blind alleys that would have amused Duchamp himself – the joker par excellence. Well, fun for us chess players as maybe, but pity the non-chesser. Although they may have chortled at this: in front of the Duchamp Evans work are those two stunning chess sets by Sophie Matisse (yes, that's right: Henri’s great grand-daughter and grand-daughter of the second Mrs Marcel Duchamp’s first husband Pierre Matisse) as if to invite you to play a game yourself – except that the curators say........ 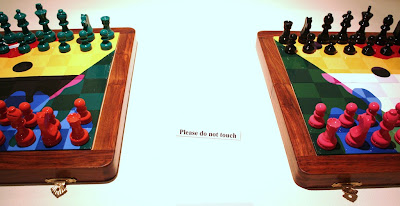 After all that it might be a relief to get on to some of Ingrid Evans more conventional works: abstract collages from paper. Just time for one: it's called Area B : 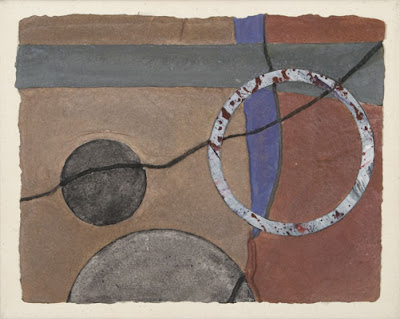 This website shows more of her work, and says:

Much of the imagery is based on aerial views of the terrain, where natural land formations and evidence of human presence appear as organic and geometric shapes--evidence of our presence on the land.

As we noted last time, this is of that type of "abstract" art that takes the real as its raw material, and distills it. Area B starts from the down to earth - craters/crop circles, fissures/freeways, creeks/canals - and by eye and application extracts the fraction that contains the art. These days such grounded works have a broad appeal, and smooth the mood in many a corporate boardroom, hotel foyer and penthouse lounge - but they won't be seen rocking the ramparts.
Ingrid Evans thoughtful work has provided an absorbing diversion, for which, thank you Mrs E., and may the road rise up to meet you.
Footnote on the Duchamp v Evans game score
Unfortunately I'm unable to decipher the details of the event. Could anyone familiar with chess Stateside and who can make it out, please let us know via the comments box. Thanks.

And if anyone out there could help by explaining whether the Pomar/Evans round 7 game, here, had any chessic significance, that would also be much appreciated.
Acknowledgements
Hooked on Chess; A Memoir. By Bill Hook. Published in 2008 by New in Chess.
Marcel Duchamp: The Art of Chess. By Francis M. Naumann and Bradley Bailey. Published in 2009 by readymade press, on the occasion of the exhibition Marcel Duchamp: Chess Master at Francis M. Naumann Fine Art, New York, September 10 - October 30, 2009.
The excellent photographic record of the exhibition, and the Evans and Matisse works, is from mickeyono2005's photostream.
See here for some more colour-saturated chess sets.
The Other Talent of Philip Poyser
The Other Talent of Bill Hook
Chess in Art Index
Posted by Martin Smith at 11:00 am