The game is over and it's Kirsan, unfortunately, who won. 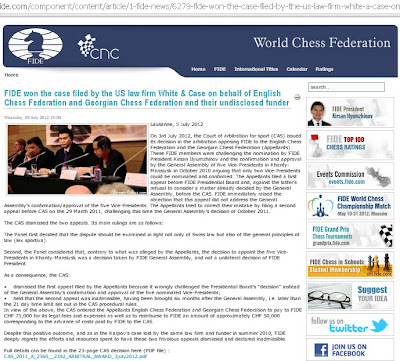 I don't propose to drone on about the case again. I've said what I've got to say more than once.

I don't even propose to discuss the merits of the case. I'm fairly sure I've not said anything about that either way until now - certainly that has been my intention - so I don't intend to make any comment now, other than to observe that to bring a case that fails in part because it is deemed not to have been submitted in time is disappointing in more senses than one.

There is a view that to pursue this case wasn't really something that fell within the objects of the organisation as set out by the Memorandum and Articles. Maybe so, and I've not seen the argument properly rebutted. However, I have not made it, so again, I won't make it here. What I will say is that if I were ever to be persuaded that the real purpose of the action was simply to bleed FIDE of money, as some have alleged, then I would take a very hostile view of the action and the people involved. 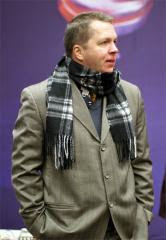 Out in the cold, or should be

So, very briefly to reiterate, my objection has always been, largely, to the secretive - and in some ways deceptive - way in which the action was organised, an approach which was not only wrong in principle, but had the effect of arousing hostility among those from whom the campaigners should have been seeking support.

As it is, the action now lacks even the justification that at least they won. Instead we have a campaign that looks more like a cock-up from start to finish - and not even an honest cock-up at that.

Never again, that's clear: the ECF should not be involved in this kind of thing in the future. In the meantime, two things.


I am thinking specifically of the ECF President, CJ de Mooi, and the FIDE Delegate, Nigel Short.

Don't hold your breath.
What these two lack in diplomacy skills, they make up for with thick skins.

No comments at all about criticisms of the ECF, or of his own conduct. Essentially an all-but-worthless document.