The day I played Tony Miles

Players like me normally get to play the very best players - if we ever do - when they are young, or when they are old. Or in simultaneous displays, if we are lucky. Over the board only rarely, or not at all. But I played Tony Miles, the first English grandmaster and the first of the world-class English players of the Seventies and Eighties, twenty years ago today.

It was in Wolverhampton, more or less Miles' home patch. I hadn't known he was going to play - I just fancied a tournament that weekend and Wolverhampton happened to be on. Nor, when I arrived on the Friday evening and saw that Miles was among the entrants, was I expecting to play him at all, since I was in the lower half on the draw and he was at the top of the top half. I assumed the likelihood was that I would start the second round on 0/1, he would be on 1/1 and the nearest I would get to him would be when I got up in between moves to go and watch his games.

I was indeed on 0/1 come Saturday morning, having lost to Lawrence Cooper despite catching him in a line of the King's Gambit which had recently won Joe Gallagher a game or two: but playing strength soon won out over opening preparation. When I set off that evening for my guest house, I noticed that Miles seemed to be struggling to show any advantage in an endgame against Graham Lilley, but nevertheless I was still more than surprised to arrive at the venue in the morning and find that Miles had ended up losing it. Not as surprised, though, as I was to find that he had also ended up being drawn against me in the second round. 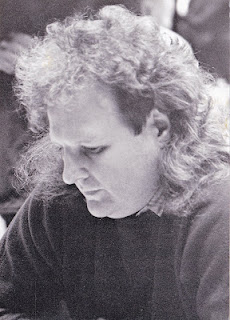 He was, I think, the first grandmaster I had ever played. He was also, I think, the highest-placed player in the world rankings I have ever played, or am ever likely to. Though his breakdown had, by then, occurred, and his playing strength was declining, he was still at 47-53 in the then most recent FIDE ratings.

He is not the highest-graded player I have ever played - that's Alexsander Delchev just last year, nor the player strongest at his peak (in 2007 I played Ulf Andersson, who has been rated 2655 and fourth in the world, to Miles' 2610 and ninth). But neither of these were the legends of my youth.

I believe I even used to have his autograph, though I surely no longer have it and my recollection as to where and when I got it is confused. (I think it was in London during the 1983 Candidates matches, but I also have a memory that it was on a copy of the short-lived Chess Express - and that it was a copy giving his Skara game* against Karpov. Not all of these memories can be compatible.)

"When I play close to home", wrote Miles once, "it's the complex - I play badly". Not this time he didn't, though the gap between his own play and capacities, and mine, was so enormous that he wasn't really given the opportunity to play well either. I certainly, played badly. Very badly, and hence the only interesting thing about the game is that it took place.


After the game he just said something about the two tempi I lost in moving the bishop from e7 to f6 and back again. I wanted to say yes, I know, but I couldn't see what else I could do after 15.Ne4. But I felt silly then - and it looks silly now - to have assumed the knight was going to c4. We shook hands. He got up and I got up. After that tournament I'm not sure I ever saw him in person again.

I don't think I would play that badly again: I didn't against Delchev or even against Andersson. I don't think I was overawed - it's just that you maybe have to lose a couple of games against grandmasters without a fight before you realise that you can do better than that. I didn't realise it, then. But as I say, I think he was my first.

It doesn't matter. He was also the first chess player whose games and career I followed. The original, the first English grandmaster, the leader of the English chess explosion. And I sat at the other side of the board and played against him and we shook hands at the end.

The quote, by the way, is a chapter title from It's Only Me. If anybody has the original source, or if I've rendered it inaccurately by taking it secondhand, do please say so.

Yup, when I faced a GM at Penarth I played like a total beginner - including, but not limited to, resigning in a position that wasn't lost.

Btw: you played the King's Gambit as White??