What happened next XIX 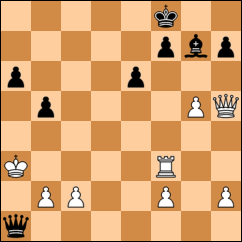 In the position I left you with on Monday, GM Jon Levitt has just played 40... Qa1+ against IM David Howell in round 8 of the 2005 Staunton Memorial.

The full game, which won the brilliancy prize, can be found here with notes by the mad green monkey himself. His annotations are remarkably similar to those provided by Levitt in the original article that appeared in the November 2005 issue of CHESS. You do have to wonder whether Ray knew what "going 'all-in'" was a reference to. Anyway, over to Jon.

"After playing 40... Qa1+ I said (or possibly mumbled) 'That's move 40'. Despite the lack of similarity in the sound of 'would you like a draw[?]' and 'that's move 40' my opponent somehow imagined that he had heard me offering a draw!

He stopped the clock and put out his hand. Naturally I assumed he had determined the position was lost and was resigning. We shook hands and wrote down different results on our score sheets.

We soon realised that we were shaking hands but not agreeing on the result. David played 41. Kb4 and the game continued as if nothing had happened."

Four years later, I was white against Levitt in a London League match. He extended his arm and, thinking he was busted and resigning, I aimed to meet it halfway. But not before he played pawn to b3, the only move. He offered a draw as he played it and, seeing me offering my hand, presumed I was accepting. I reeled in shock and apologetically mumbled "Sorry, I thought you were resigning" before accepting a couple of minutes later.

These things are more common than you think.

What happened next Index

'All-in' is just a gambling reference, isn't it, or am I missing some well-known obscene connotation?

Is Lawrence Day really a GM? How did that happen, I wonder?

I am sure these things are quite common. Take the position at move 40 from this game -

Here, I hallucinated that 40...Bxb2 won outright and played it. Just after I pressed the clock I impetuously offered a draw (as if to draw his attention to the fact that I just blundered! since I was otherwise cleary winning). He looked at me morosely and adjusted the clocks for the next time control. "Fair enough" I thought "such a silly draw offer doesn't deserve a response".

But then he did not take the free piece (Kxb2) played something else and soon resigned. If had shared my hallucination, which he clearly did, why didn't he take the draw? Sure, he was Finnish and clearly knew virtually no English, but I was still puzzled. What did he think I had said?

Later I worked out that he must have thought I was pointing out that we made the time control.

This once happened to me - except the discrepancy didn't come to light until a few rounds later.

It was a one day rapidplay tournament, but can't remember where. Not one of Adam Raoof's thoguh.

First or second game. Blitz finish. I was a queen and a few pawns up and when we reached mate next move my opponent stuck his hand out saying "I was hoping you'd stalemate me by accident."

I was assumed he was saying "You were wise to spare the life of my last pawn because that would have been stalemate otherwise."

Off I went to hand in my winner's 1-0 slip to the controller.

Later in the day the guy came over to me and asked why I'd handed a 1-0 slip in when the game had ended in a draw.

That was about 25 years ago.

I also have a more recent memory of my opponent sticking out his hand without saying anything and me being a bit confused about it, wondering if he was offering a draw or resigning. It turned out to be the latter.

John, whether or not Ray is himself a poker brat, channelling Levitt's chosen vocabulary in his own article without attribution is downright cheeky.

There was also a magnificent dispute on similar lines in the 70s in some Common Market Championship, or some such thing, between Luxembourg and Denmark or someone, in which one player thought he was accepting resignation while the other player thought he was accepting the offer of a draw. The twist was that while they were sorting this out the other players in the event started analysing the position and it transpired that the player who had thought he was accepting a draw offer, and whose opponent thought he was resigning, was in fact winning, which rather ruled out resuming the game as a fair possibility. In the end I think the faux resignation stood, which was a bit hard since the fellow had a winning position and certainly hadn't intended to resign, but that's life, I suppose. Bill Hartston wrote a characteristically wry account in the BCM of the day.

Mr Day is an International Master. "Commonwealth Grandmaster", however, is a title apprently devised and awarded by Ray Keene. I believe the late Bob Wade held the same distinction.