From the opening into the rook endgame 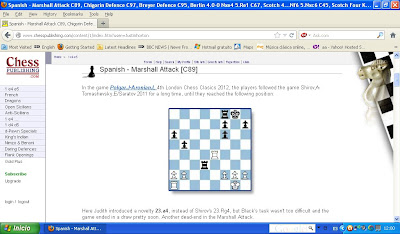 Which is curious, since Chess Publishing (to which I've been a subscriber for about fifteen years) is actually a site devoted to opening theory, rather than technical positions at the other end of the chess narrative. But this is an endgame, all right. Not a queenless middlegame, another subject in which this blog takes an interest, but an actual endgame. Very much an endgame.

This is not entirely unheard of. Indeed one of my colleague Jonathan's favourite books is Edmar Mednis' From The Opening Into The Endgame. 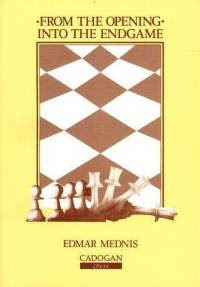 We spent some time during Penarth last year looking through its various recommendations for cutting out the middlegame and getting as soon as possible from the opening moves into a marginally superior and hopefully hard-to-lose endgame. I particularly liked this one: 1.c4 Nf6 2.Nc3 d5 3.cxd5 Nxd5 4.Nf3 g6 5.e4 Nxc3 6.dxc3! Qxd1+ 7.Kxd1 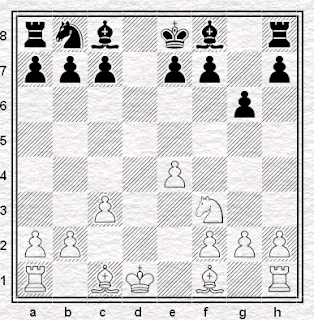 Get in. Thing is, though, even Mednis' recommendations (if I recall rightly) were mostly for queenless middlegames, like the one above, in so far as they can be distinguished from bona fide, no-doubt-about-it, endgames. Which are quite rare in opening theory, even these days, when opening theory often extends beyond the point where some chess competitions still have time controls.

Our position today, though, features an innovation on move 23. Not at all late by contemporary standards. (I've certainly played theory myself beyond that stage in correspondence - and quite likely OTB as well.) Lets' have a look at the position again. The last move has been a capture, made by Black, on his move 22. 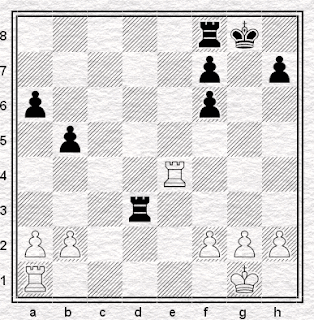 What's left on the board? Each side has a king, two rooks and five pawns, which is eight bits each, exactly half the number with which they began. Not just the queens but all eight minor pieces have left the board. Quite a tally for so early in the game, especially when you bear in mind that they had a full board until move nine.

I can't immediately think of anything like it in opening theory - can readers? We'll need an offhand definition to work with, so let's define, for the moment, a theoretical position as "a position arrived after a sequence that has been played more than once in grandmaster chess". We can cross when we come to them the various bridges this presents, like
and just work within my definition for the moment.

I'd like to ask - can anybody think of a position reached in opening theory which features fewer than sixteen pawns and pieces on the board? Or one, not including the kings, with fewer than four pieces?

If you can, can you think of one that occurs after fewer than 22 moves?
Posted by ejh at 7:55 am

Leonard Barden's 1975 How To Play The Endgame In Chess has a chapter on "Endgame Openings" all with early Q exchanges. He gives: the Exchange Spanish; QGD Exchange variation; and some lines in the French Tarrasch, KID Samisch; and in the English and Sicilian.
More ammunition for JB's opening repertoire?

I'd play the Tarrasch ending in the French for sure but the fuckers never go 3 ... c5 any more. It's all ... Nf6 and all that other crud.

If you search a database for Rook and Pawn endings, defined as both players having one or two Rooks with no other pieces, you usually find at least 10% of the games selected. If you then look for games where the rook and pawn ending is reached, there are a number where the move number is really low.

An example which might be regarded as "theory" is this one.
http://www.chessgames.com/perl/chessgame?gid=1494169

In this game, White offered to reach the Rook and Pawn ending and Black declined the offer.

I think Black retains equality by keeping the queens on as not demonstrated in this game, the point being that the White King will be less able to become active.

It doesn't quite fit your bill but there's a position in the Yugoslav Attack (starting with 9.0-0-0 Nxd4 10.Bxd4 Qa5) that leads to a king and pawn endgame (6 pawns each) after white's move 23. It's been much analysed (NIC, "Experts vs the Sicilian") but I'm not sure it's been played much at GM level.
However, surely no debate on openings and endgames is complete without some reference to the Berlin, as commendably described by your occasional contributor John Cox? As a team-mate of Parker, Ferguson and Cox, I have spent more time than I care to mention watching the Berlin in action (?) on neighbouring boards. I am assured the time John fell fast asleep on move 4 was due to a long day at work rather than his enthusiasm for the impending endgame.

If Kasparov-Short game five from the 1993 match (here had gone on just a few moves longer it could have reached a double rook ending after 20 moves. As it is they called it a day at move 18 with a minor piece each and queens on the board too.

The famous Fischer-Euwe game below probably gets enough pieces off the board for Jonathan to be happy.

There's that famous bishop ending in the Rb1 Grunfeld of course, with someone - Novikov? - 'improving' on move 35 against someone else - Tukmakov? And then someone else - Marin was it? - 'improving' again twenty years later and showing that Black can draw anyway. Warms the cockles of the heart.