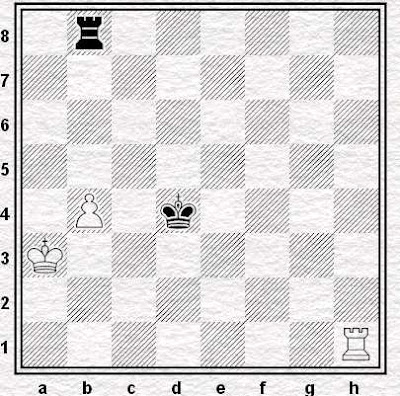 Candidates' over, time to get back to some basic rook and pawn technique.

Without Carlsen and Kramnik's mutual last-day implosion, Ivanchuk's win over the Norwegian kiddiwink in round 12 might have been one of the most significant games of the 21st century. As it was the tiebreaks went in Magnus' favour and the lost half-point didn't really matter.

As for the game itself, cutting off the king, a fundamental concept in these endings, turned out to be the key to Black's victory. Chucky, needless to say, wasn't unduly troubled although for the rest of us - well, me - things weren't so straightfoward.

Anyhoo, today we have a position based on a similar theme. White's got the pawn, but Black's rook and king are actively placed. It's your move and you're down to increments so you've got thirty seconds at most to choose. What are you going to do? 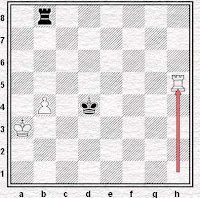 The choice is yours.

(position taken from de la Villa's 100 Endgames You Must Know)
Posted by Jonathan B at 8:00 am

My recollection from Rosen's book Chess Endgame Training is that Rc1 is insufficient with the pawn still in White's half of the board. White's king can't move forward to dislodge the rook without dropping the pawn that is too far behind him. I think Black's king just has stay on d5 and d6 so that White can't play Rc5 and then b5.

So, given two choices, I guess I'd play Rh5 by process of elimination, although if it is in fact correct I'd have to work out the rest from first principles.

Rh5, bien sur. It's a general principle in rook endings (or so I once read somewhere) that cutting the defending king off on a rank is generally more effective than doing it on files. Besides, as someone said above, Rc1 is a fairly trivial draw - 1...Kd5, and what's White's next move supposed to be?

Yes, you're all right - although it's interesting to see the different thought processes of getting there.

In essence, the defending cut off by one file is not enough for a knight's pawn in it's own half of the board. If the defender is well placed, that is (as the rook and king are here).

The difficult thing is working out how White makes progress after 1.Rh5 Kc4 2.Rc5+ Kd4. Obviously I can look it up if I want, but if you don't already know, it's not so easy to see. (Also, one is naturally likely to think - if 2.Rc5 is forced, why not 1.Rc1 putting the rook on the c-file straightaway?)

I have looked it up and I would try to find a rationalisation for Rh5 instead of Rc1. Distance to the queening square of b8 is always important and Rh5 keeps the King further away once White manages to get the b pawn to advance.

When you get these endings in practice, it's almost always against the clock even with a 30 second increment, so knowing what to play without much thought is often necessary.

After Rc1 ...Ra8 loses. You should leave it on the b file to stop the pawn advancing.

Ps - engines are rubbish at rook endings so houdini not knowing 1 Rh5 wins doesn't surprise me in the least.

30 ply is no substitute for technique.

engines are rubbish at rook endings so houdini not knowing 1 Rh5 wins doesn't surprise me in the least.

I suspect that engines aren't that good at endings at all.

My guess is that they have little or no algorithms to win/draw endings by technique.

Access to tablebases helps though only for positions with a limited number of pieces. (I see that ChessOK have recently announced access to 7-piece tablebases).

Of course AngusF is largely correct but a 30-ply analysis beast is still a behemoth of an assistant for checking variations. As humans we must try to establish underlying concepts and rules-of-thumb for playing out these positions. However as someone who's had access to chess computers for over 30 years I have to say Houdini is incredible. (And I'm only a cheapskate with the free version.) It was able to see mate-in-27 from a random KBNvK position for example.

Unless I am missing something, Nalimov disagrees with you.

I meant 'in general' you don't have to place the rook on c5. After the specific position that we get after 1 Rh5 Kc4 I'd certainly trust Nalimov's opinion over mine.

Although, as it happens, it's clearly the only move.

When I tried Houdini 3.0 on this position it chose Rh5 within a few seconds and by the time it got to 30 ply its eval was +3.0.

I don't know what version you (Anonymous) was using, but there does appear to be an issue with Houdini 3.0 where if it thinks you don't have a legit copy it gives weird evaluations, especially in the endgame. (I am not accusing you of anything; after buying it I had to download it a second time before its evals made any sense.)