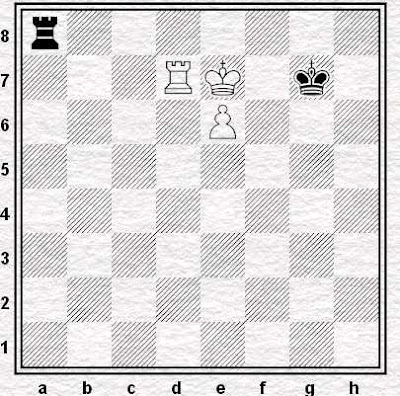 It's what you might call a Big Ask. Take a theoretical pawn position that's appeared in just about every endgame manual for the last hundred years or so and find something new to say about it? I'm not sure I'm up to the task.

So let's try mixing Ending 57 with Purposeful Shuffling (aka the 'going around in circles' principle of SMA#9) and see what we get. Theoretically speaking 57 might be a simple draw, but in the real world, as the Norwegian Prince could tell you, things don't always turn out as they should. It's early 2013. Our friend Angus is sitting in I Love Coffee on Streatham High Road waiting for a bit of endgame practice. Let's take him on at Ending 57.

True, Angus is much the better player, but we have the advantage of having looked at the position more recently. We know that 1 Rd6 is the best chance to win and that Aronian - Carlsen finished 1 Rd6 Ra7??, 2 Ke8 1-0. Maybe if we play the same way Angus will blunder just like Maggie did. Although Angus isn't playing with his flag hanging in a blitz finish like Carlsen probably was and he looks quite relaxed there munching away on a custard tart so maybe not. How best to maximise our chances, then?

Time, I think, for a bit of purposeful shuffling. Before bringing our rook to d6 we'll go around and around. We're not just going to give Angus a chance to go wrong - although will be ready to take advantage if he does - we're also quite deliberately setting up the expectation of a threefold repetition. 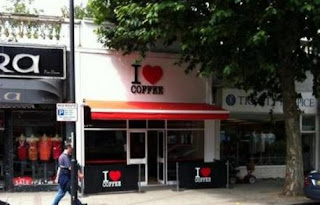 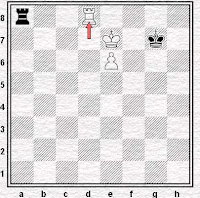 1 Rd8.
Why not? We want to get our king to the back rank so barging Angus's rook out the way seems as good a move as any.

Why do we want to get to the eighth? Well, we'll be closer to getting something like a Lucena (RRE: Lesson #2) I guess, and also because it's the best we can do. Sure, we'd rather pop the king on the f-file, but we're never going to have time for Rd6-d1-g1+ to give us room to do that.

The other point behind our first move is that we need to persuade Angus to move his rook if we can. On a8 it covers the back rank and is far enough away from the action that it can safely check our king if need be and we can't win with Black's pieces stationed as they are. 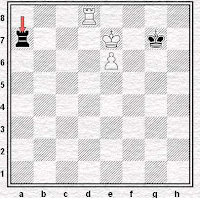 1 ... Ra7+.
An equally obvious reply which, if we're lucky, will blind Black to the fact that he's hanging by a thread. Only one other move saves the day here.

Still, the check is plenty good enough because if we advance to e8 as we want to Angus has ... Kf6 and the pawn drops straightaway. There's nothing else to do but go back to the starting position and try again. 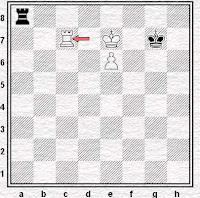 3 Rc7.
White's not forcing Black to do anything here and almost any reply from Angus will hold the draw so why bother with this move? Answer: because if Black keeps us off the eighth rank here he loses. 3 ... Rb8 4 Ra7! +-.

It's always worth finding out if your opponent has grasped the importance of checking distance. Angus has, but let's not get too downhearted yet. Remember, the feeling that White has no serious winning try is exactly what we're trying to cultivate here. 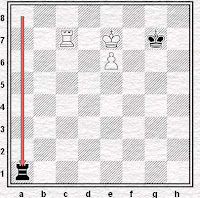 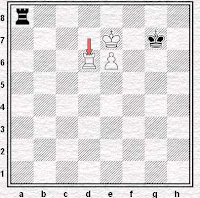 5 Rd6.
So here, having gone around and around for a bit, we launch our winning attempt.

We've set up Black rather nicely and we've even repeated the position twice. The draw is within reach which is often the moment that folk relax. 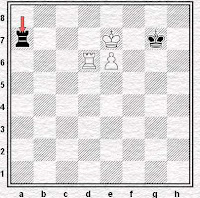 Why did we get lucky? Or, to put it another way, why did Angus blunder? In part, because we helped him to. While we were shuffling about giving Black the chance to go wrong we were also secretly setting up expectations of repetitions. The insertion of 3 Rc7 between 1 Rd8 and 5 Rd6 is important, I think. It helps hide the fact things are not quite the same here as they were at the beginning. 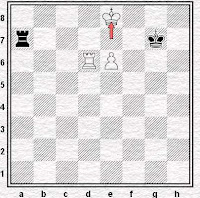 I'll leave it to you to work out why 6 ... Kf6 doesn't save Black as it would have done before.

Playing chess in public in Streatham is brave.

Playing chess in public in Streatham is brave.

Ah, but we were armed with custard tarts (from the coffee shop)!

(I'm still hurting, though, from that jiggery-pokery JMGB carried out on me.)

Unfortunately 4. Rd7 is a draw because Angus promptly claims his three-fold repetition with 4. ... Ra8, having an up-to-date scoresheet to prove it. Unlucky, JMGB!

(note that the start position is the first occurrence of that position, and it recurs after moves 2 and 4).

Oops. A bit too much shuffling.

Another one to add to the collection of Kings cut off is Adams v Fressinet from the 4NCL clash of Wood Green v Guildford.

Thanks for the tip off Roger. Presumably one or both were very short at the end or they wouldn't have bothered playing to Lucena

Need play from Adams though. 4 v 3 with a distant (not very distant in this case) passed pawn is something that I hope to get around to at some point, btw.