A few weeks back we ran a post on the Marcel Duchamp exhibition at the Barbican which included a mild dig at a curatorial lapse in their presentation of his chess. In spite of this the Barbican sportingly gave us a link from their Facebook page...

...which might have encouraged a few art fans, unchessed and curious, to look in on the S&BCBlog and investigate one of its micro-niche genres: chess in art.

Please forgive the self-referencing, but it provides a pretext for what follows...


There is quite a bit of Duchamp's chess in that Barbican expo (on until June 13), yet the chess related works on show tend to be rather literal i.e. pics of players playing, re-packaging of chess paraphernalia, etc. - although the claim has been made that the apparently non-chess The Bride and her Bachelors (The Large Glass) has some latent chess inspiration, with the game deeply embedded in its imagery of suspended tease and collective self-abuse.

Maybe and maybe not, but if you do fancy some indisputable chess-in-art drama, rich, moreover, in internal associations and self-cross-references, get over to David Zwirner's in London's gallery quarter behind the Royal Academy for Marcel Dzama's show: Puppets, Pawns and Prophets (on until 11 May). He is a new name to me (it's Dzama as in llama, and drama of course, and he's Canadian), but is evidently well-known among the cognoscenti, with a long list of exhibitions, publications, articles - and album covers even - to his credit, as you can see from the gallery's website (from which come all of the Dzama images in this post).

Marcel D.'s abbrev'd. name reprises that of the other Marcel D. - Duchamp - and his artistic output does likewise. It is similarly multi-media and hydra-headed. Off-shoots reconfigure as they pop up throughout the gallery. So, in no particular order, we have...

...cartoonish watercolours - flat, looking like paper cut-outs. In these, so one reads, Dzarma uses root-beer syrup (whatever that is) as a medium, tinted to give a reduced palette of earth-colours. They show groupings of BD-style characters, sets of invented chess men, and other assemblages set out for inspection or composed with inscrutable stagery..

...one of which, by way of example, is Opportunists mingling with combatants (2012). 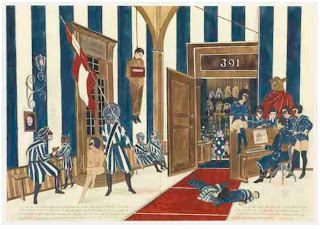 Then there are dioramas constructed from paper cut-outs, real this time, that recycle characters from above and elsewhere; and Sci-Fi-ish ceramic and tinplate robo-heads (to be worn as/by chess pieces) which also feature in counterpart watercolours, each an illustrative scenario rendered in that ubiquitous palette of earth-colours. Plus, for now, the attention-seeking scarlet of the headpieces.

Dzama has invented his own vocabulary, grammar, semantics and - to pursue the theme - narratives. Very Duchampian: with a literal hommage manifest in a chess box of chess bric-à-brac - A Red Box for Marcel, including the score of a game that Marcel Dzama played with his daughters (if I've got it right). They won. This game is on a proper score sheet, but in English descriptive notation, showing some moves, perhaps beyond the beginners' stage, written painstakingly in a child's hand. There is another chess specific work on the same floor Perhaps They Are Gods (2013) celebrating GMs of yore (Botvinnik for one), and other lesser chess lights, with their phantasy portraits.

And then there's a film - about 14 minutes long - Sister Squares (2012), which title nods to Duchamp and Halberstadt's work on King and Pawn endings...
...but before we get on to that, another bit of cross-self-referencing: the film's own storyboard. It is presented as a free-standing artwork:
The pastiche of a cover for Chess Review is easy to pick out above (showing the White Queen, with robo-head-cone, now in white), as is the final panel, three black pawn-people and a "synopsis" underneath: "There are two kingdoms at war. One is black and the other is white. The black king must act fast and decides to kidnap his next pawn. He chooses the best dancer in his kingdom. The new pawn begins but she is in unfamiliar territory." Which is actually less a "synopsis" than a trailer...for a film of a dance, in balletic style, enacting a chessic story of plot and murder.

It is in split-screen: 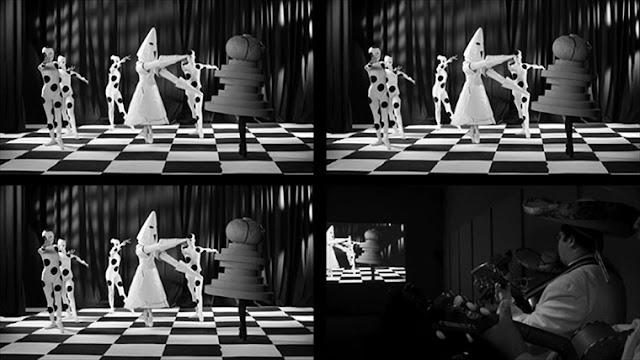 The screenshot understates the complexity of the proceedings. For the most part the upper quarters show the balletic animation of the chess pieces (here WQ, WPs and BR) as they dance out the drama of the chess "game" - including the fateful stabbing of a white pawn. Bottom right is a Mexican band creating the sound track to the ballet/movie, and a "real" audience, filmed watching a film of the ballet, applauding at the end, though above they are obscured in the gloom. The ballet itself is watched by a puppet audience (see the screenshot below) revealed now and then spectating on the ballet with ghoulish relish as if baiting a gladiatorial contest (and here you can also just see the "real" audience, bottom right). 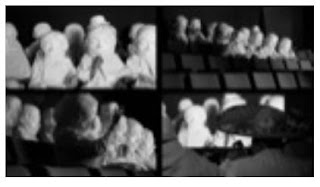 The bottom left sceenlet carries, for most of the film, a diagrammatic replay of a game which, also unfortunately, these screenshots do not show. Even more unfortunately, the board is presented the wrong way round, and black is unusually playing upwards. When you have it mentally re-oriented you see that it is the real thing: a QGD Tartakover by transposition in which Black tries to break out with a temporary pawn sac on c5, then an exchange sac and a neat tactic to win it back, but it boils down to a K and P ending winning for white (even two consecutive moves by black near the end don't help his cause).  It's played over three, or was it four, times, but it doesn't synchronise with the "moves" of the ballet, or anything else.

The other story in the film, shown in the upper quadrants - and you can't see this in the stills above either - is two real guys really playing chess in the open air with proper bits and pieces, including a clock. Their game isn't the same as the diagrammed QGD, and actually you don't see much of it as the focus is on the players (one of whom presses his clock with the wrong hand), but it does sync with the ballet when the loser (playing white) gets mated just as the balletic murder most foul is perpetrated and - to emphasise the point, and bump up the drama - he is coincidentally assassinated by a lone lady with an AK47 (there's a lot of AK47s in Dzama) shooting from a nearby apartment. A very modern MO, and all intercut, towards the end, with the ballet.

To summarize this split-screen cinematic multiplexity: there are three games spanning the orders of the real and the symbolic: the game with the clock; the diagrammed QGD; the ballet. There are two intrigues: the assassination; the "kingdoms at war" story told in the ballet. There is one convergent climax - the chess mate/real shooting/balletic stabbing. Chess is the vehicle that carries them along and, as we know from the history books, the game was conceived as a surrogate for war and slaughter.

Now reflect on the nested points of view taken/displayed in the work: as the ballet begins someone spies on the stage through a peephole in the curtain (should've mentioned that earlier); the puppet audience spectates, pleased as Punch, throughout; the female assassin scopes her target before she shoots (after eyeballing us as well); the other chess pieces witness the balletic murder; the audience of real people watches the ballet on film, and are filmed as they do so; we are the audience in the gallery watching the film (and the film within the film)...

...and, on to the now inevitable conclusion and, if you like, the coup de theatre of the Dzama drama, or (to lapse into chessic hyperbole) the masterstroke meriting an exclamation mark: there is another projection installation (supported by its own storyboard, and box of bits), showing the dancing chess pieces in action again...
...but it can only be seen from the street through the gallery window...
...so when you go out to see it you engage another modality of looking - and to top it all, the passers-by stop and stare with you, or at you. You become their object, and you even become your own as you see your reflection in the window looking at the installation through it. You are caught in the web. You are part of the game.

Hmmm...Better not get carried away...Anyway, that's how I saw it; maybe you would see it differently.

Of course this is not the first ever chess ballet (see here and here, and there was even Max Harmonist (1864-1907) the strongish chess master and professional ballet dancer; though he is not referenced by Dzama, I think) although others have more of a romantic theme, even if tragedy lurked in the wings before emerging on stage. Dzama's ballet explores only the dark side, and if you enter his world you have to take as it comes, here and there, some lurid sexual action and random violence. But what is especially absorbing is to see Dzama's ideas and imagery emerge, reverberate around the gallery and bounce off the walls. He, as with Duchamp, takes an idea, worries it, and then re-presents it for your reconsideration. Thus, and to complete the (self-referential) picture, mention should be made of  Dzama's book on chess: it is self-published, in an edition of 300. It contains only images of his chess oeuvre as above. You can consult a copy in the gallery.

You may be drawn in by what's on view in his exhibition and its interconnectedness; and you may also wonder about the peculiar place of chess in Dzama's personal world; why he has seized on it for his artistic imagery; can he play a decent game; why does he sometimes allow his presentation of it to be seemingly, though mildly, maladroit...not something you get with the scrupulous Duchamp. Chess is not, of course, the only game in Dzama-town; there are other themes to explore, though none as potent or enigmatic. The show is on, to repeat, until the 11th May.

I suppose you might say there's something of the Dada about Dzama and his theatre of the not-completely-absurd, which brings us on briefly to one of Dada's founding fathers, Kurt Schwitters (1887-1948) at Tate Britain until 12 May. He rubbed shoulders with Duchamp, Ernst, and the rest of them. The Nazis declared him "degenerate". But leaving that aside, look at this sympathetic and respectful portrait of his doctor painted in his last years of domicile in this country before he died. It just goes to show that the avant-garde, who went beyond conventional picture making, could really do it when they wanted, and get the square right.
Finally, returning to the theme of chess as metaphor for war, we have fellow chess blogger Rodney Barking to thank for drawing to our attention this chess-in-agitprop gem by photomontager and anti-Nazi John Heartfield.

...and the Zwirner Gallery has kindly pointed us in the direction of their official trailer of the Marcel Dzama chess film on YouTube.