The Worst Move On The Board XV 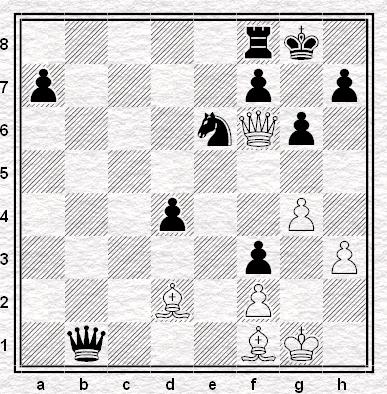 A fortnight ago I wrote about Luděk Pachman's book, Decisive Games In Chess History. One of the tournaments that Pachman looked at was the Capablanca Memorial at Havana in 1965, which Borislav Ivkov would have won had he not disintegrated at the end. Leading by a point with two games to play, he lost both.

This is his penultimate round game against the back-marker, Gilberto García: position after 36.g2-g4. It's hard enough to lose this position for Black, but Ivkov managed not only to lose, but to play the worst move on the board.

There's only one way to allow White a forced mate in four moves. Ivkov found it - can you?

If memory serves right, this example is given in The Complete Chess Addict (or maybe the Even More CCA)

The legendary JH Donner told the story of how he was standing next to the board when Ivkov played the move in question, "abandoned by all his guardian angels". If I remember correctly, Donner even felt partly responsible for Ivkov's tragedy, because the move had also crossed his mind (related somewhere in "The King", don't have my copy at hand right now). Ivkov's bad luck continued the next day, when Robatsch beat him with black, playing an excellent game.

Campion - correct, well remembered. In both editions, I think.

Donner's The King has two pieces on Ivkov's tragedy. The writing is a joy to read and the book is currently available at half price from the publisher.

I would suppose that ...Ng5 also makes a mate-in-four possible for white

This debacle also features in Anthony Glyn's chess novel "The Dragon Variation". In the book it's a veteran British player who blows it, against the world champ, no less.