Run that one by me again.


Some well-placed observers have long been convinced that that was the regime's endgame, and even that the Russians would be in favour, envisaging the same kind of relationship with such an entity as the Americans have with Israel.

So says BBC correspondent Jim Muir, in a passage which suggested to this particular reader either that he had omitted an adjective, or that he doesn't know what an endgame actually is.

I've noticed the term endgame cropping up in journalism over the past couple of years, generally (though not always) in foreign affairs coverage and generally (though again, not always) in the reporting of armed conflicts. I seem to recall particularly noticing the term during the Libyan civil war and it's certainly the case that a Google search for endgame libya guardian.co.uk gets you a variety of examples. We have, for instance,


1. We've had a few commenters asking about the "endgame" now the intervention has taken place

3. Gaddafi's driver on the endgame

6. Endgame in Libya: how the world called time on Gaddafi

Then there's this in which the term makes it into the URL if not actually the text. Also, for variety, mention is made of a CNN correspondent using the term but rendering it "end game" instead. As did Middle East expert Juan Cole:

a little learning, Professor Cole, is a dangerous thing.

That was 2011. I happened to come across three examples in February the followng year. There was

as well as, also on the subject of Greece: 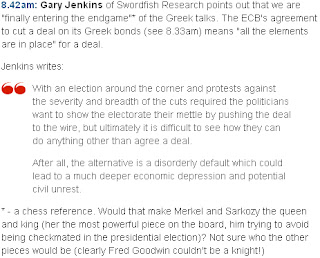 As chess metaphors go it's not too bad, particularly given the normal standards of the genre. It does at least identify the endgame (but not "end game") as the final stage of an encounter, although it seems to me to identify that endgame as a relatively short affair - whereas, as we know, it is very often the longest phase of the game. But it's all right as these things go.

Not sure about this though:


There is an endgame to this sort of abuse, and it's to make people disappear

This isn't right, is it? There is something awkward, clumsy, not-quite-right about it, as there is with the example cited at the top of this column. I think it is the same thing in each case - it seems to characterise "endgame" as a particular state of affairs which a given party is attempting to bring about.

But it isn't. The endgame is simply a phase of the game, like, say, extra time. To use the noun as it is being used in these examples you would have to qualify it in some way, to attach some appropriate adjective. But neither of these examples does so, giving the impression that the term is being misused, that it is being employed without the writer understanding what it means. (You might also say the same about our example above which refers to "the endgame for Greece".)

Maybe this is bound to happen when a term suddenly enters into mainstream journalistic language from a particular, obscure and technical area of activity, but being inevitable does not prevent it from being irksome. Being interested both in chess and my native language, and - you may feel - having nothing more useful to do with my time, I put it to Mr Muir that he was using a term without knowing what he meant by it.

We had something of a false start:

but once we both clarified that we were not talking of offence, nor headlines, nor this piece (and the fact that the term has cropped up in three recent pieces is perhaps evidence of its overuse) Mr Muir was kind enough to discuss it with me.

He argued that words do evolve beyond their original meaning, which of course is true - that's a normal process, by which a word is unshackled from its precise origins, which process allows it to be reinterpreted. He also said, in a phrase interesting enough that I take the liberty of quoting directly from his email, that there has been

a need for a word to cover the idea of a given party's strategy for the final decisive phase of a particular struggle.

Is that true? I confess that I can't immediately think of an alternative (but it is late and I am tired). It does however occur to me that conflicts have been written about since at least Herodotus and in recognisable English for at least half a millennium and it's not clear to me why that need would not have arisen before.

The other point to be made here usually involves the invocation of Humpty Dumpty and I would be loth to disappoint:

what I think is that language does necessarily change, not always logically, and what may seem an incorrect usage today may be current, accepted and in your dictionary tomorrow (in which case, presumably all the people who were wrong are retrospectively right).

Nevertheless to employ a metaphor one needs to think reasonably clearly about its actual meaning. When goalposts are claimed to have been moved, for instance, we are aware that there has been an aim, a target, an objective, which has been altered. So with an endgame: even if a new term is required, as Mr Muir is arguing, I am far from sure that the simple, standalone, unqualified "endgame" does the job. Before the endgame, Tarrasch wrote, the gods have placed the middlegame - and before the noun, the gods have often placed an adjective. "Preferred endgame" might be a preferable choice.

But of course, if people choose to use "endgame" in this new and irksome way, then it will indeed become proper usage and it will be one of these things, like the capitalisation of T in terms like "the Oval", which irks me often.

Still, there are those who take their terminology from chess yet know whereof they speak. It is almost a pleasure to come across "endgame" with a qualification that allows it to make sense.

Say what you like about Ken Rogoff, at least he knows what an endgame is.
Posted by ejh at 7:55 am

Endgame isn't purely a chess term unlike stalemate and checkmate. For example the concept arises in Scrabble
http://en.wikipedia.org/wiki/Maven_%28Scrabble%29
and Backgammon
http://www.gamesandcasino.com/backgammon/end-game-strategies.htm

Arguably it applies to any game where there is a phase with limited horizons and simplified possible strategies.

I wonder how many writers using 'endgame' even think of it as a metaphor. It seems to have evolved into another - mainstream - word entirely.

I'm kind of reminded of Michael Crawford talking of people doing Frank Spencer impressions. They weren't copying him, he said, as they were copying Mike Yarwood copying him. The original source material had more or less become forgotten

And there's an up to the minute reference for you.

Endgame is used a lot in the TV spy series Alias. It has a different sense there. It is often by and large a mystery what endgame different characters are angling for, given double-crosses, subterfuge, and so forth. I don't think it's chess related. I wondered if it might be a piece of espionage terminology proper, but nothing on google would suggest so.

I got a tip-off from the ECForum to have a look at this search...

By coincidence I came across this yesterday.

As the term endgame is no longer exclusively associated with chess, it seems that its definition, by necessity, must expand its nature. If you play go, you'll have two basic phases to the endgame, one of which is relatively simple.