When you ask the question "how does Ray Keene get away with it?" it's hard to come up with a better answer than "God only knows". But part of the explanation may be that Ray is a prodigious networker, who lives by doing favours for people whose ethics are often no better than his own and himself receiving favours in return. Four decades of networking builds up an awful lot of protection.

One minor character in this particular play has been CJ de Mooi, one-time President of the English Chess Federation, who, it will be remembered, by chess players at least, invited Ray to open the 2011 British Championships. This was strange for a number of reasons, not least that Ray has not been a member of the English Chess Federation for about twenty years. Not since the financial shenanigans that involved him claiming and receiving a substantial sum of money for duties he had not apparently performed. 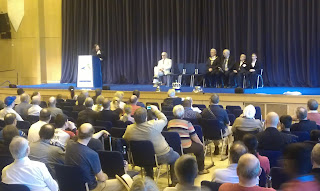 CJ, for his part, was no stranger to financial shenanigans, distinguishing himself at those same 2011 Championships by distributing thousands of pounds in cash without invoices, receipts, signatures or any other kind of record to show for it. He subsequently disappeared from active chess life, though not before persuading the ECF to pass him another wedge of money to send him to the 2012 Olympiad in Istanbul, on arriving at which event he resigned his post without having performed the duties for which he had received his money. He proceeded to enjoy a holiday and - no doubt - a good laugh at our literal expense.

Anyway, CJ was (and is) a small part of Ray's mutual backscratching network. Here's part of Ray's Times column for 4 June 2011, which otherwise annotates the game Spassky-Bronstein, Leningrad 1960, from the 37th USSR Championship. 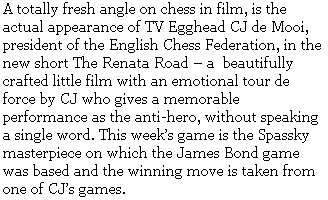 Now had I but world enough and time, on top of ploughing through Ray's many plagiarisms and his extraordinary number of recycled columns, to look at a third dubious aspect of his Times journalism, I might write about his use of his column and his Twitter account to plug his friends and business associates. (One notes, for instance, his several dozen mentions of Julian Simpole.) But for now, we'll just observe with regret that Ray's support was insufficient to raise the profile of The Renata Road, beautifully crafted as it may have been, to a film you have actually heard of.

In more important "actually" news, the column for 4 June 2011 was one in which Ray actually mentioned the source from which his notes were taken. 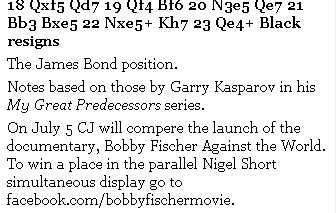 Yes indeed! Ray does in fact do this from time to time, perhaps once for every seven or eight times that he does not. He does it here. There's no mistaking it. That's a mention for My Great Predecessors, which he has so often plagiarised. Here, he speaks its normally absent name.

So what, then, is it doing in this piece, appearing as it does in the Predecessors series and the Plagiarism Index?

Not in the Times, but in the Spectator. Twice.

Here is Ray's Spectator column for 13 November 2010, entitled On Display. 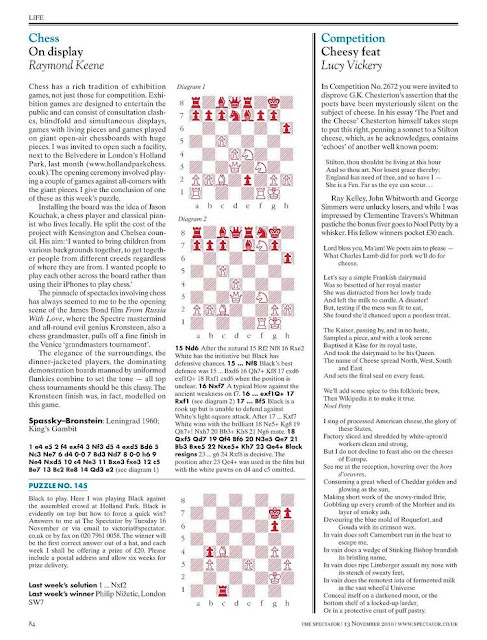 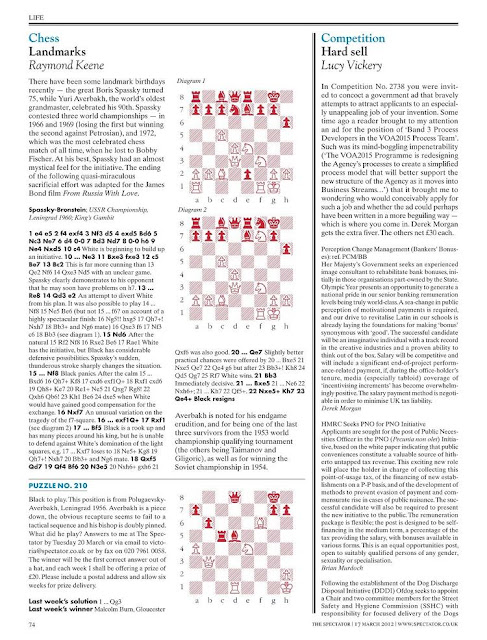 The notes from these two columns are plagiarised from Part Three of My Great Predecessors (Everyman, 2004) in which the game Spassky-Bronstein appears on pages 203-206.

They're plagiarised in very different ways, though. One is basically a simple importation of phrases, passages and variations wholesale: the other is a more subtle example of the genre.

This is not the more subtle of the two.

(The note is longer than this: I've reproduced the relevant part - ejh.)

(Again, I have reproduced only part of the note - ejh.) 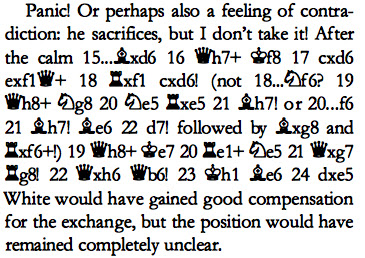 (I have reproduced only the first paragraph of two - ejh.)

Nothing wrong with this note, by the way. I rather like it.

(Another shortened one - ejh.)

As you see the piece from 2012 is simple, blatant, unmistakable plagiarism of a kind which has become rife in Ray Keene's recent work. The earlier, 2010 column is more an example of Raygiarism in which the phrases are usually altered to disguise the plagiarism, but, as I wrote in March:


not bothering to do it thoroughly, such that some original phrases still remain.

And indeed, in the 2010 piece, we have phrases like


After the natural...White has the initative


Black is a rook up but is unable to defend

which give the game away to anybody who should happen to look at the original. Still, if it were a one-off - if, perhaps, it weren't the writer's habit to do this, and rather worse than this - you might do no more than raise a knowing eyebrow. Trouble is, that's pretty much the best that Ray does, rather than the worst.

One piece - the major purpose, plugging a friend - which has an attribution. One piece plagiarised, but with disguise. One entire shameless rip-off. I suppose that's Ray's full spectrum nowadays. That, and copying his own notes wholesale.

Perhaps the date, June 2011, is pertinent in a way. While I've been working, this summer, on Ray's columns I've come to develop some impressions about how he works, and whether it's changed at all. Those impressions:
These conclusions are subject to revision. Unlike, one might add, most of the old columns Ray recycles.

Anyway, as Ray observes, the Spassky-Bronstein game is the one adapted for the chess sequence in From Russia With Love. 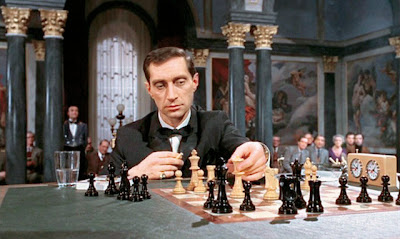 In his Times notes he calls the final position "the James Bond position" but of course it's not, quite. As Ray correctly states in his 2010 Spectator column:

Ray Keene, meanwhile, is surely recognisable as the most outrageous plagiarist in British journalism today.

Interesting to learn the industrial aspect is a recent phenomenon. I wonder if it coincides with a change of ghostwriter.

It is strange the Times isn’t bothered. It’s not so much the plagiarism – they’re journalists FFS; of course they don’t care – as the fact that Ray’s column is such unremittingly tedious shite, and thus presumably is failing in its purpose of pulling in the punters. They’d do better, and cheaper, simply to stop paying Ray and republish the same ten games on a fortnightly cycle for the next few years, before print newspapers disappear. No-one would notice the difference.

To be fair though that Polugaevsky-Averbakh puzzle is quite nice. Presumably stolen from Averbakh’s book, which one notes came out about that time. If I’m allowed to plug rival blogs to yours as a service to your readers, btw, Simon Spivack’s on that was quite interesting.

Au contraire, a lot of journalists do care about this sort of thing. (The people who tell you about journalistic malpractie are, normally, other journalists.) But not necessaraily all the ones who get to be in positions of influence.

No-one would notice the difference.

This is the point you made in aprevious comment, to the effect of who reads this stuff anyway? I admit that's puzzled me too, on the grounds that if anybody read it you'd think that somebody would notice.

Which in general I think is right, and nobody much does read it. Although Johann Hari also got away with it for years without people noticing. Admittedly what he was doing was harder to spot, but surely not that hard.

Oh, come off it! Some journalists do give a F FFS! I discovered by accident, while listening to a BBC radio documentary on the 40th anniversary of the Bond franchise, that the reason for the missing pawns was that the legendary producers mistakenly thought there could be a copyright on chess games, so changed the ending to the game - unfortunately, there was no Herr Fritzy around back then to check it all still won!

Here's my Scotsman column from last year on the day of Bond's 50th anniversary.

TODAY is Global James Bond Day, celebrating the longest running film franchise in cinematic history, as a daylong series of events marks the 50th anniversary of the release of the first James Bond Film, Dr No, on 5 October 1962.

In Sean Connery’s second outing as 007, From Russia With Love, in 1963, there’s a famous chess scene that introduces us to the cold and calculating tuxedo-clad Kronsteen (played superbly by the Polish actor Vladek Sheybal, who was half Scottish by birth), the chief planner for the villianous organisation Spectre, just as he's about to defeat Canadian master McAdams to win the Vienna International Chess Tournament.

For the scene, director Terence Young decided to adapt a brilliancy prize game from the Soviet Championship of 1960 in Leningrad between Boris Spassky and David Bronstein. And from today’s diagram, after playing 22 Nxe5+, Kronsteen announces, “Check” and receives a drink with a coded message ‘You are required at once’ imprinted on the bottom of the glass. He then quickly finishes off the game after 22 ...Kh7 23 Qe4+ and Black resigned.

The only difference between the two games was that, in the Bond movie, there were no pawns on d4 and c5. This remained a mystery for 40 years until it was revealed that the legendary Bond producers, Albert “Cubby” Broccoli and Harry Saltzman, mistakenly believed there to be a copyright on chess games, so they had the pawns removed from the board.

the legendary producers mistakenly thought there could be a copyright on chess games, so changed the ending to the game

I never knew that.

So maybe Ray does think that if he changes a word or two, like they changed a pawn or two....

(Incidentally, the person who sent the comment we received this morning may like to resubmit it non-anonymously and preferably with an explanatory link. Ta.)

(Apologies to our corrrespondent, but we cannot publish allegations of plagiarism, or comments making such allegations, unless we can actually see the material ourselves - both the original material and the alleged copy. Even then we would proceed only with great caution.

We appreciate your concern in this matter and if you want to communicate with us further please do so via our email address chesscomments@gmail.com. Anonymity is guaranteed. We thank you for drawing the matter to our attention.)