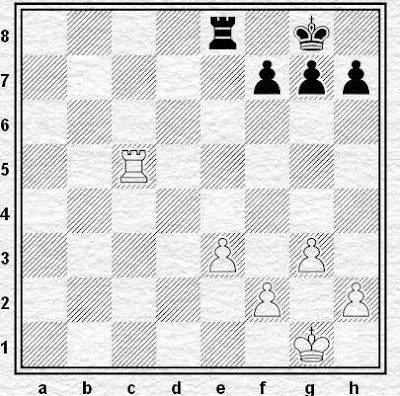 
So here we are again. The British Championships - the 100th edition no less - kicking off today. Amusing as I thought it would be to take yesterday's bonus post from EJH and reproduce it this morning, tomorrow and Wednesday, I have decided instead to write a little something myself to mark the occasion. Only a very little something, mind.

Actually I've been somewhat distracted in the run-up to this year's tournament. So much so, that until this weekend I was under the vague impression that Mickey Adams was going to be playing again. I see he's busy winning on the Black side of the Berlin Endgame in Dortmund, though - good lad - so I guess he won't be in Torquay after all.

No official #1 then, or Short, or McShane for that matter, and yet with the official site saying there'll be a baker's dozen of Grandmasters slugging it out it still promises to be a great event. At least this way it's not all a foregone conclusion and a race for second place.

Anyhoo, with the sort of up to the minute reporting of important chess events for which this blog is rightly famed, I'm now going to ignore the British for the next couple of days and focus instead on a minor player in a minor tournament from a fortnight ago. i.e. me at the South Wales International. 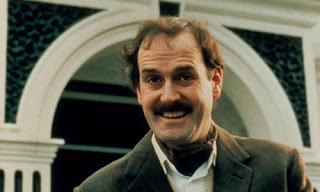 Chesswise not an awful lot went right for me in Penarth. Still, I did at least get a trio of rook endings there. Three from nine games is certainly not a shoddy percentage, although, as it happens, I might have had twice as many.

Three rook endings that happened - one win (round three), one loss (round six), one draw (round seven) - and three that didn't quite materialise. If anything, I found the three where the other pieces didn’t come off the board more interesting than those when they did. Well, a couple of them anyway. 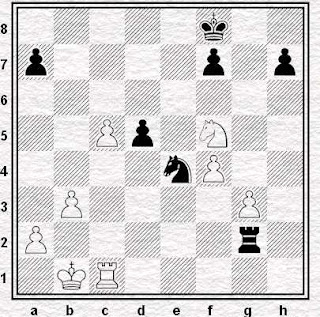 
The first non-event came as early as the second round. The computer’s preferred continuation is to exchange knights here with ... Nxg3. Clearly the c-pawn will queen very shortly afterwards, however, so although I was tempted to bump my stats up I decided that immediate resignation was more appropriate. 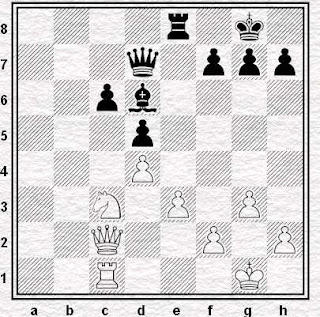 
On to round 4 and my second ever tournament game against a Grandmaster. In this position I spent a fair bit of time considering a pawn sacrifice with … c5.

After 26 dxc5 Bxc5, 27 Nxd5 Qxd5, 28 Qxc5 Qxc5, 29 Rxc5 we'd reach the position at the head of today's blog: a rook ending with all the pawns on the same side of the board. The problem is that White’s rook ends the exchanges stationed on the fifth so the position is considerably more difficult to hold than the ones where you push your rook’s pawn forward two squares. I considered 29 … g6 but then White just maintains the clamp with 30 g4 and it all gets a little ticklish. 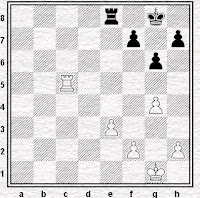 I’ll be looking at this ending in more detail next week. For now, suffice to say that in the end I rejected it because I felt the position I had was too good to trade down to something like this. That said, swapping off would have been an infinitely better choice than pissing the game away in one move which is what I actually did. 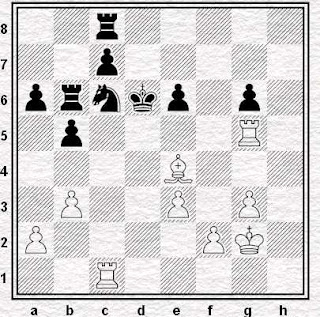 
Finally we have the critical position from my last round game. I was really determined to win this one. I'd had a pretty miserable time of it over the previous couple of days so I really wanted to finish on a more positive note and drag my tournament back to something approaching respectability.

My initial feeling was that simply exchanging twice on c6 then chomping g6 would leave me a passed g-pawn up and him having to spend his next move defending the e-pawn. Originally I thought this should be a rather safe if not particularly incisive winning continuation, but I became concerned that after 37 Rxc6+ Rxc6, 38 Bxc6 Kxc6, 39 Rxg6 Black would simply defend the pawn with his king leaving himself with his rook in an ideal position to support the charge of the c-pawn down the board.

A pawn up I might be, but his rook (behind the pawn)  looked much better placed than mine (stuck in front). Aside from the active rook thing, though, when I took a closer look at the position, superbly located in the centre of the board as it was, I felt that my bishop simply had to be better than his knight and my rook on c1 has many more possibilities than his on b6.

So instead of exchanging down I took on g6 straightaway instead. Not long afterwards my bishop and queen’s rook joined a mating attack on my opponent’s king and I was very glad I’d kept them on the board. More on that tomorrow.

"The British Championships - the 100th edition no less - kicking off today."

That one I managed to see. I tried ... h5 with the "idea" of answering Na4 h4/Qxc6 with ... Qg4 and somehow managing not to notice that everything is hanging. Not that it works even if the rook and bishop weren't en prise

Not my finest hour.

Golly. Still, never mind. The first round of the British has supplied both you and TWMOTB with some inspirational material, I suggest. Though perhaps Mr Burnett's ...Ke5 wasn't really creative enough.

Indeed. World famous Rook and pawn grinder coming to a monday post near you very soon.

I think Colin Purdon's ...Kb7 against Hebden was also a TWMOTB.