As you can't have helped noticing if you've been following our series, many of the annotations plagiarised by Ray Keene are by Garry Kasparov, from his Predecessors books and others. But not all - we've had Viswanathan Anand and we've had Bobby Fischer - and today's piece is another non-Kasparov interlude.

We're looking at Ray's Times column for 7 March 2012, which annotated the game Euwe-Capablanca from the AVRO tournament of 1938. 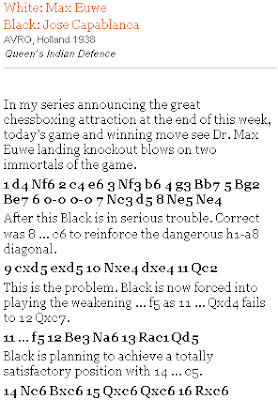 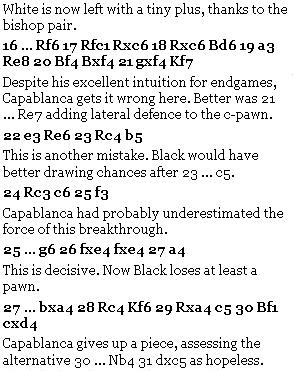 Ray, of course, gives no source for the notes, which the reader will therefore assume were written by the Times chess correspondent.

But I think not.

I think the original author of the notes was the winner of the game, Max Euwe. I think this because I have seen Alexander Münninghoff's book on Euwe, Max Euwe - The Biography, published by New in Chess in 2001, which book reproduces a lot of games originally annotated by the late world champion. 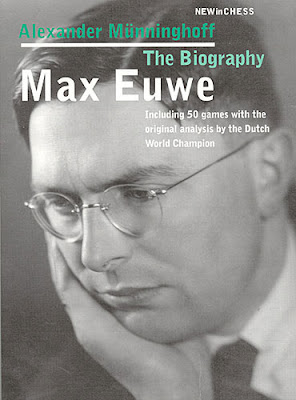 One of these games is his victory over Capablanca at the AVRO tournament, which appears in the book on pages 234 and 235. Ray's own notes bear a startling resemblance to the notes on those pages - or it would be startling, were we not more than used to this already.

Let's run through the notes in the now-familiar fashion.

(The New in Chess annotations dispense with the x for a capture - ejh.)

Ray, as so often, gives no clue as to whether his notes come from Münninghoff or anywhere else, but where does Münninghoff get them from? At the end of the game there is a note:

attributing the notes to an old and presumably defunct magazine, Schaakwereld.

Which is a lot of people, living and dead, for Ray to plagiarise all at one go.

But he's up to the task.

I can't help feeling this series is getting a little like shooting fish in a barrel. Wouldn't it be more of a challenge to try and find a Times column by Ray with entirely original notes?!

The barrel still looks invisible to a lot of people though...

Now that you’ve established that there a lot of plagiarizin’ goin’ on, it might be interesting to look into how/why he is getting away with this. Why are the authors or the publishers not doing anything about this? It would maybe be interesting to analyze the possible reasons/causes.
I’ll be honest, I haven’t read every single post detailing Mr. Keene’s copy and paste skills, so maybe you’ve already dealt with this.

It's an interesting point. Trouble is, though, that as long as nobody admits that it's going on, it's hard to establish exactly the why. We can speculate (and we will, up to a point) but we can't do much more than that.

What we can maybe do is to trace the history of it, something on which we're working. We've already established that while Ray has been an occasional plagiarist for at least twenty years, the recent wholescale plagiarism kicked off (for a couple of possible reasons) around the end of 2010/beginning of 2011. It appears to have grown out of a longstanding habit of recycling his own work without acknowledgement, so in the course of tracing as much of as possible we find ourselves asking questions like:

We're beginning to work out the answers to some of those questions. But as for the last one - that's just the same question as before....

It's got to get more difficult to ignore considering what now comes up when you put "Ray Keene" into Google. Congratulations - your index is the 4th result!

Also when you start typing "Ray Keene" into Google it suggests "Ray Keene plagiarism" which brings you up second after Wikipedia (and third, and fourth...).

You've also got a mention on his Wikipedia page.

His employers really must have their eyes wide shut not to notice all this.