Checked and expanded upon

By and large, Ray Keene's many plagiarisms over the past three years have been outrageous, blatant, in-your-face examples like the every-word-is-stolen example we had for you a fortnight ago.

Most of it has been like that and we'll have more plagiarism in that style in columns to come, but today's exhibit is a more complex example, dating from the time when Ray bothered to try and disguise his copying, even if he was too lazy to do it properly.

It dates from that time, even though the notes in question were in the Spectator only last month, in Ray's column for 10 August 2013, titled Miles gloriosus. 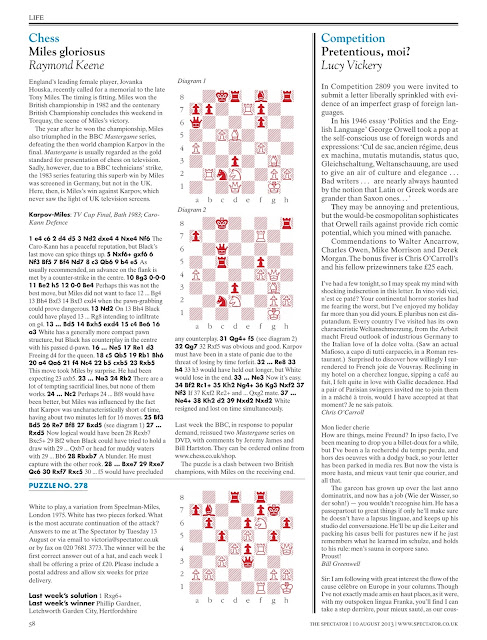 Ray's column annotates a game played back in 1983, when Tony Miles beat Anatoly Karpov to win the final series of The Master Game. 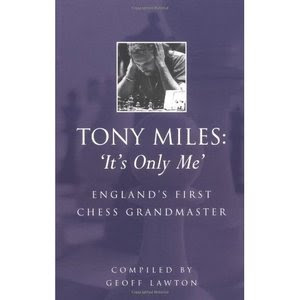 These are the annotations plagiarised by Keene, in a bits-and-pieces fashion, in his Spectator column last month.

Here's how that column looks in The Spectator Book of Chess: An Anthology 2001-2004, published by Hardinge Simpole in 2004. 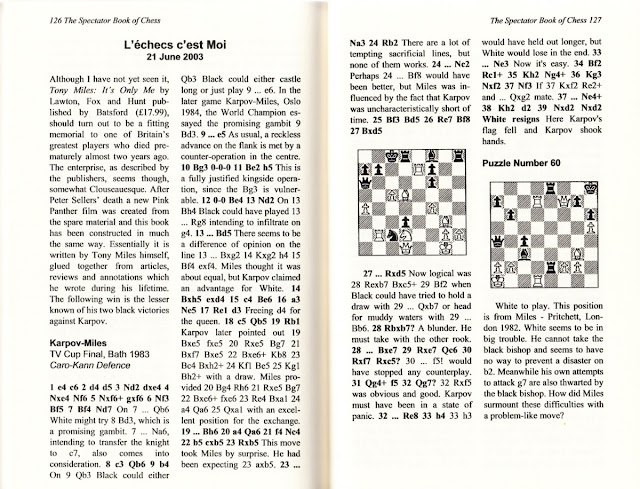 Before we go any further, one can't help noticing this comment in the introduction

which is perhaps pushing one's luck, coming from somebody whose entire literary career has been based on that principle. (Even the joke is recycled.)

But let us turn to the start of the piece. 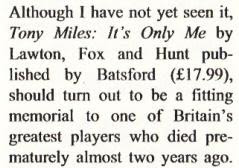 Ray, he assured us, had not yet seen It's Only Me. We, however, can see it below. 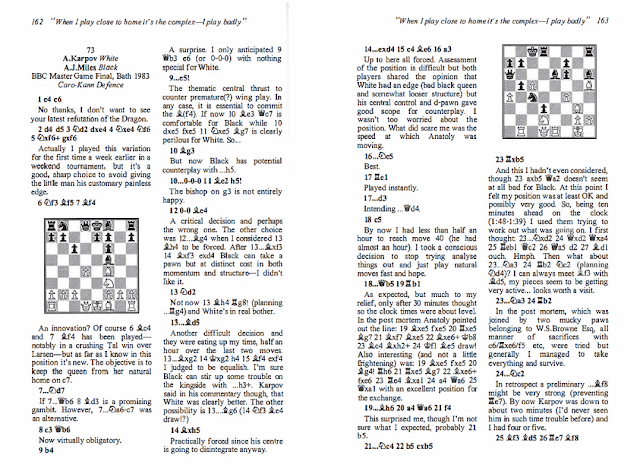 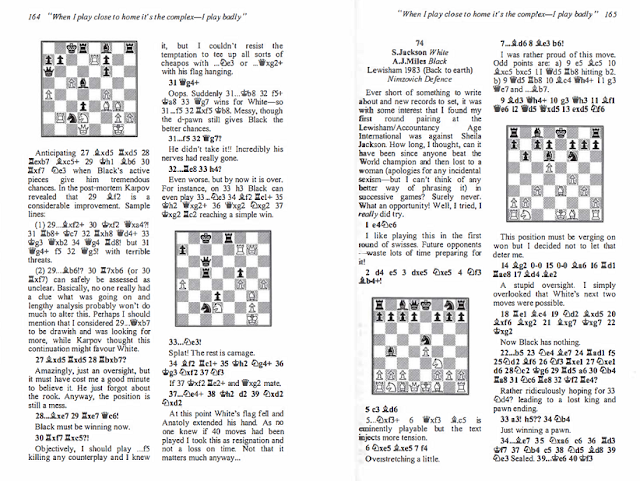 If you compare the notes in It's Only Me with those from The Spectator Book Of Chess, your surface impression is likely to be that these are two different sets of notes. Look a little closer, though and you start noticing all sorts of similarities in the variations. Take for instance Ray's note to Black's thirteenth.

Isn't it a little reminiscent of Miles' note to the same move? 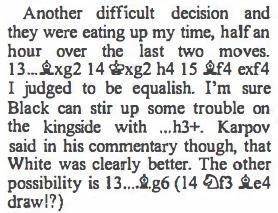 look just a little derivative when you've seen Miles' own?

Suspicious, you may feel, but nothing as yet that you'd hang a man for. Then let us look a little more closely, first at Ray's note to Black's seventh

and then at Miles' note

which curiously enough involves not just the same variations that Ray discusses, but the very same term "promising gambit". What a coincidence.

which is just a little thing, but coincidentally exactly the same as Miles' own short note.

Or we can look at Ray's note to White's nineteenth 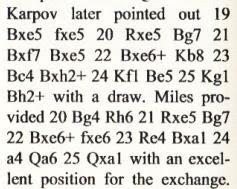 in which Karpov not only "pointed out", as he did in Miles' annotation 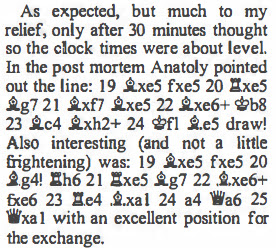 but the phrase "with an excellent position for the exchange" just happens to be used, as it was by Miles. (It is not a common usage. Google it and see.)

This wouldn't be a plausible set of coincidences in any circumstances, let alone when they involve somebody with Ray's track record. It is plagiarism, of course, even if not of the wholesale variety to which we have become accustomed.

What it is, is Raygiarism.


But, because you are Ray Keene, it is also:


Those original phrases, on their own, tell us that the notes are plagiarised from Tony Miles - who receives no credit or acknowledgement, and should do. You can adapt someone else's notes. You can base your own notes on someone else's notes. But if you do, you're supposed to say upon whose notes you based them, if you are to avoid a charge of plagiarism.

You should also, of course, say where you found the notes on which you based your own. It is, by the way, just possible that Ray was telling the truth when he claimed not to have seen It's Only Me. The acknowledgements, which appear on pages 6 and 7 of that book, include this one.

I can't remember all that much about Chess Express, which is long since deceased, but I remember buying it - and I even think I had the copy in which Miles' victory over Karpov was annotated by the winner himself (and had the annotations autographed by the man who wrote them).

Ray might - plausibly, though not probably - not have seen It's Only Me when he wrote his version of the notes. He might have plagiarised them directly from Chess Express instead.

In his Spectator column for 19 November 1983 he wrote:


Tony Miles's own deep notes to this game will appear in Chess Express, a new magazine being launched on 25 November.

This is not, of course, the only time Ray has paid tribute to a deceased player by plagiarising their work. It wasn't to be the last time he was to produce this set of notes without bothering to say where they came from.

It's not clear when Ray's notes arrived on Chessgames, though looking at the discussion 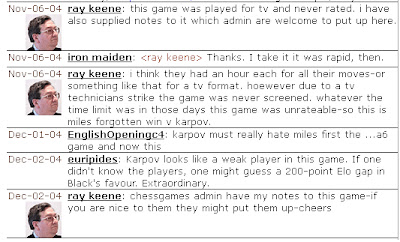 November/December 2004 seems probable. It is clear that the notes, with their "promising gambit" and their "pointed out" and their "with an excellent position for the exchange" and all the rest should not be described quite as they are, "Notes by Ray Keene".

The next outing for Ray's plagiarised notes was in Ray's volume on Tony Miles, which was published by Hardinge Simpole in 2006: Tony Miles, England's Chess Gladiator. 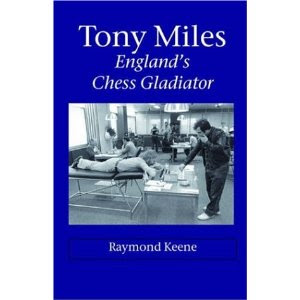 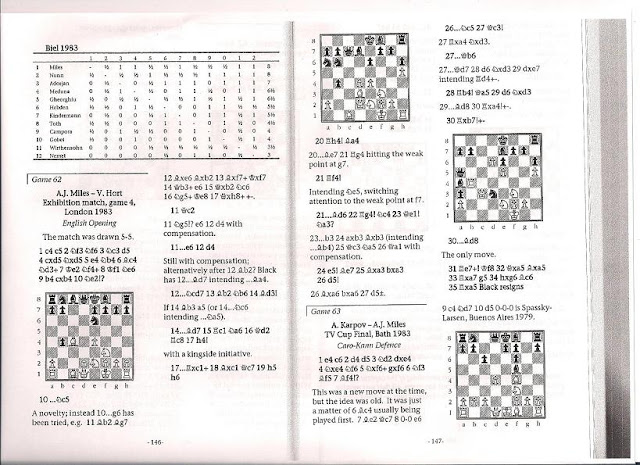 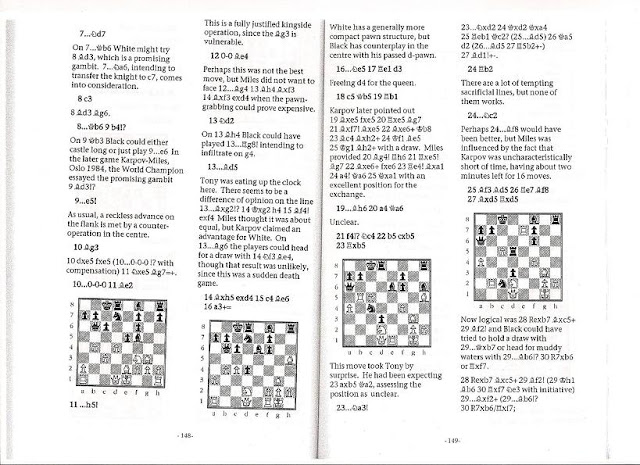 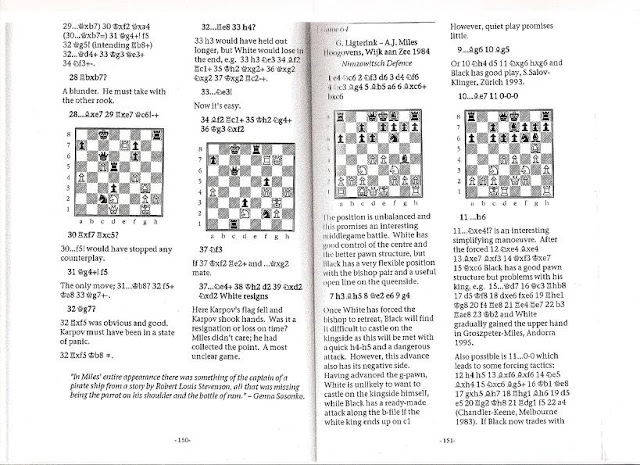 Matter of fact, England's Chess Gladiator came with a small note as to the provenance of its annotations. It's on page 7 (where it is slightly less lopsided than it appears below). It's a little less detailed than are Lawton's acknowledgements.

What you may especially notice here is an absence of specifics. No indication of which notes are entirely original and which have been "checked and expanded upon", nor any specific pointers - beyond "columns, magazines and Informator" - as to where those notes were originally published. No mention of It's Only Me or Chess Express, nor any mention of the Spectator for 21 June 2003.

But I like "checked and expanded upon". It'll do as a euphemism for "plagiarised".

That's the third occasion on which Ray presented notes as his own that should have been attributed at least in part to Miles. 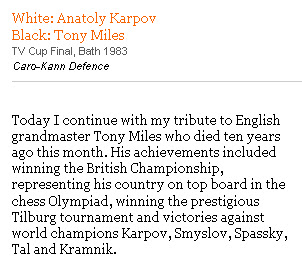 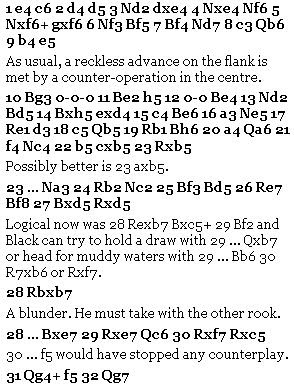 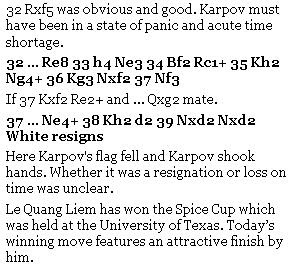 What we notice here is that the "promising gambit" has gone, as has the "pointed out" and the "excellent position for the exchange". They were also absent on the fifth occasion he rolled out the notes, the Spectator piece which we mentioned at the outset of this column. 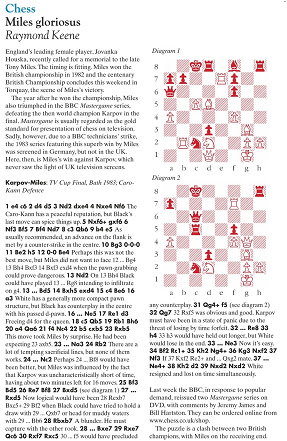 Naturally, on neither of these occasions did Ray mention that the notes had been published before, or that he originally pinched the notes off the gentleman who had won the game. Still, that short-but-telling note to White's 37th is still there in both:

It's not much, but it's there all right, and we know where it came from.

There's much else about these pieces that I'd look at, had I the time to write it and you the time to read it. (Why is the note to white's ninth in The Spectator Book Of Chess so ineptly produced? Why did Ray persist with the similarly inept construction "Karpov's flag fell and Karpov shook hands"?) But instead of troubling ourselves with relative trivia, let us turn our minds instead to questions of philosophy, because it seems to me that we potentially have a classic example of the Ship of Theseus Paradox.

I first came across the Theseus conundrum in the form known as Jeannot's Knife, which we can maybe render thus:

It's also known as Locke's Sock, Lincoln's Axe and any number of other namess, but it may be best known today, in the UK at least, as Trigger's Broom. 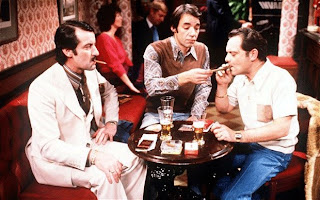 Only fools and horses work, as Ray could tell you

In the absence of Chess Express we can take Miles' notes in It's Only Me as our Ship of Theseus. They constitute Trigger's broom, with brush and handle intact.

Now, let us posit a potential set of annotations to Karpov-Miles, Bath 1983 in which Ray, having gradually replaced almost everything else that came from Miles with his own annotations, finally removes the pesky note to White's thirty-seventh.

Would they still be Miles' notes?

Or would we, once the last trace of actual Miles text had gone, have a new, not-Miles set of notes?

It's an interesting question. Here's another. If somebody removed Ray Keene in his entirety from his chess columns, would anybody notice any difference?


[Thanks to Kris, Eleanor Crawford, Pablo Byrne, Olimpiu Urcan, Angus French and others]