Hello! It's possible you're here as a result of having seen page 7 of the new Private Eye. 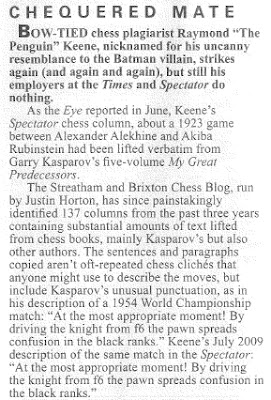 Naturally we recommend you purchase a copy.

Or you may have seen the recent piece on Chessbase, which has sent several thousand extra page-views our way since it appeared on Monday.

Score at around 2200 BST last night

Should either of these apply, you may be new to the affair of Ray Keene's multiple plagiarism, so let us direct you in the first instance to:
Basically, the story is that after a long career of intermittent plagiarism (and more-than-intermittent recycling of his own articles) Ray Keene embarked on a large-scale campaign of crude plagiarism, dating roughly from towards the end of 2010. More than one hundred and thirty examples of plagiarism have been found in Times and Spectator chess columns that have appeared since the start of 2011.

still his employers at the Times and Spectator do nothing.

The Spectator's editor, Fraser Nelson (editor@spectator.co.uk) was emailed on 19 June 2013: so far no response has been forthcoming, in line with what appears to be established practice at that publication.

Nevertheless, yesterday morning I sent Mr Nelson a letter with a full list of all the Spectator chess columns we have found (from the period of his editorship) that have plagiarised other people's work.

The Times were contacted by phone on 23 August, when I spoke to a Craig Tregurtha, who asked me to email both him and a man named Ian Brunskill. I sent them an email with a full list of all the Times chess columns we have found (from 2011 onwards) that have plagiarised other people's work.

I've not yet received a response from either, so yesterday I emailed again.

I wonder if you are yet in a position to respond to my email of 23 August concerning the multiple plagiarisms of your chess correspondent.

and attached the relevant page from Private Eye.

Should I get any response from anybody, I'll let you know. In the mean time, should any readers, new, regular or occasional, wish to email any of the gentlemen concerned, by all means do so.

[Thanks to Sean Terry and Chris Brooke for scans]
[Ray Keene index]
Posted by ejh at 7:55 am

(I should note that I don't actually run this blog: just the bits I write!)

Thanks Justin for pursuing this so diligently. Surely now the Penguin will be removed from these posts.

Incidentally (and you may leave this out of any post if you so wish) a respectable figure in the chess community told me recently that in his opinion Ray's lifestyle and eating habits are so poor that his health is at serious risk.

I'm one of your new readers, courtesy of the ChessBase article. I have long been a reader of Edward Winter, and long known that Keene is a notorious plagiarist. Great to see you sticking it to him with copious documentation.

I've added your blog to my blogroll. Hence, I'll see your latest post whilst producing my own, which will keep me returning.

A year or two ago I sent copies of an edition of Kingpin to the editors of three publications for which Keene writes: The Times, The Sunday Times and The Spectator pointing out that the mag contained an article of a dozen pages accusing him of all kinds of stuff and that he was doing nothing in response,
I stressed that I was NOT after a job but the unchallenged allegations being made against Keene weren´t helping the reputations of their publications.

I also said that there were many good young masters and Grandmasters who were as capable of being their correspondent and that this was not very nice for them when seeing this depicted as the way to success in the world of chess.
I received no replies.

I have often noted that when I assume like Jeffrey Barnard, Keene is unwell, he resorts to commenting on his own games of bygone days. It is then he unleashes his stash of exclamation marks, such as !,?,!?,?!,??,!!,!!!, which he is impecunious with when discussing the games of such hacks as Jose Raul Capablanca y Graupera or Alexander Alekhine.