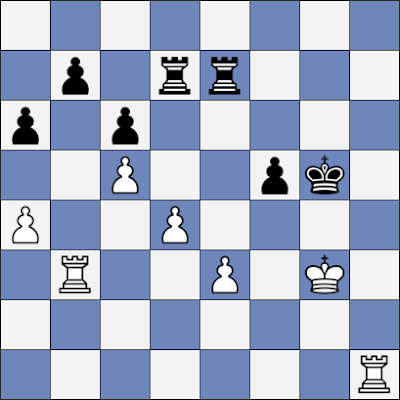 
Bill Hartston:
With just two rooks and four pawns each, it's very difficult to see how Larsen can make progress in this ending

Jeremy James:
Both players reached the time control of two hours without any great difficulty getting their 40 moves in, but then they did have a slight problem: they've got to play all the rest of their moves in just one hour. And so far all that's happened is that they've swapped off a pair of rooks.

We're going to join the game forty moves later on with Larsen, White, having just played his king from d3 to c4.


It is my birthday tomorrow. I gather to mark this occasion I can expect to collect £10 from every player. Or is that for securing second prize in a beauty contest? I forget and at 45 I believe I have license not to worry too much about such details. 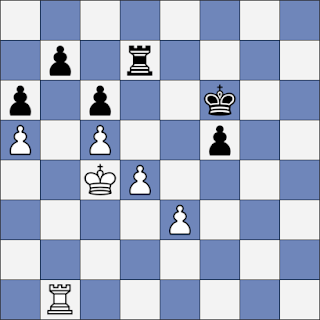 Anyhoo, in addition to a tenner from each of you, dear readers, I very much wanted to celebrate by getting my hands on the new(ish)ly released Master Game DVDs. So much so, in fact, I decided to eschew the usual plan of spending August dropping increasingly unsubtle hints to my family and instead I simply went out and bought them myself. And, if you'll forgive me a moment of immodesty, what a very good idea that was too.

I don't want to give too much away - you really should be having a look yourself - but I will say that if it's rook endings that you're after then go for Series 7. In the first one  (Series 6, that is) there is but one solitary rook ending: the monumental effort from which the above snapshots are taken.

After the game finished host and expert summariser had a bit of chat. What was Larsen up to? Why didn't he just get on with it? Why mess about for 40 moves?

BH:
What Larsen was doing, of course, was really just waiting Donner to get into time trouble ...

JJ:
Is it really sporting to do that? When the position is clearly drawn?


I love how Hartston lapses into silence here, the smile that forms on his face and the deep breath that he takes. If Master Game was a cartoon we'd see a thought bubble above his head: "How do I say, 'what's sporting go to do with anything?' without looking bad on national TV?". But it isn't a comic it's the BBC so what we actually get are three seconds of silence before Jeremy James comes to the rescue and gives Hartston an out. 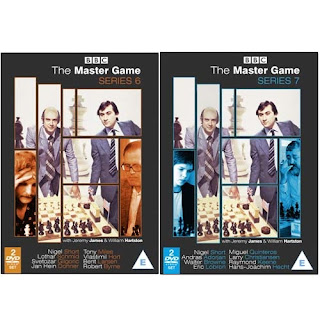 All very entertaining, but what of those missing 40 moves? They're not to be found on chessgames - which has an earlier televised game between Larsen and Donner, but not this one - but luckily they are in the second edition of the Master Game book.

So here's another prezzie to myself: 40 moves of rooks and pawns shuffling about. Happy birthday to me.


(with thanks to Richard)