On holiday in Northern Spain back in June I encountered a remarkable chess set, and it provides the basis for this post on an episode of chess in war. It was a sobering reminder, if a reminder were needed, that for some chess is an escape, a respite, a life-line to be grabbed in the flux of a brutal world - not for them is it to be indulged in the rarified hush of the tournament hall.

This is the set.
It was hand-carved by one Giodarno Stroppolo in an internment camp in France in 1939 at the first knockings of World War 2.


The set was on display in this exhibition at the Guggenheim in Bilbao... 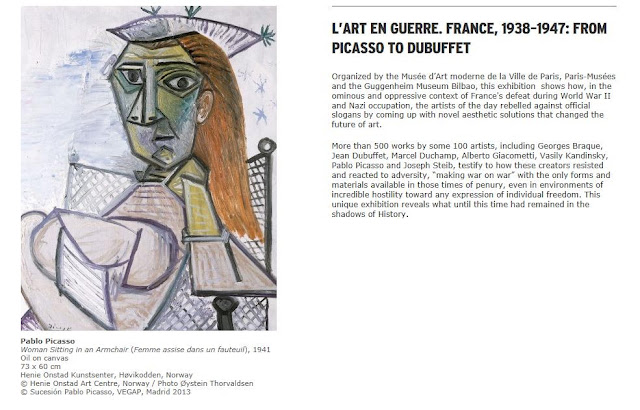 ...and a little historical background will put it in context.

France - as the exhibition note above explains - was overrun by the Nazis in May 1940 and, although it was allowed a compromised form of collaborationist self-government in the southern Vichy zone, it remained under the boot until liberation in 1944 led by the Allies. The exhibition documented the dilemmas faced by artists (as a special case of the French population in general) under the occupation: whether to resist, to sit it out and wait for rescue, or to collaborate pragmatically (or perhaps wholeheartedly) with the occupiers or even, at some time or other, all three. It also showed art, and artists, as direct victims of Nazi persecution, particularly if Jewish.

The exhibition would, one imagines, have had special poignancy for the Spanish who, although their country didn't fight in WW2, had experienced the trauma of a Civil War from 1936 to 1939 when the Fascist Generalissimo Franco, supported by elite divisions of the army, overthrew a democratically elected Popular Front government (34 years later the same scenario: Chile, Pinochet, 1973 - it is now the 40th anniversary). Infamously Britain, and France, refused to aid the legitimate government, but Hitler had no qualms about helping Franco by, among other things, sending dive-bombers to devastate the defenceless Basque town of Gernika, and murder hundreds, maybe thousands, of its people.

Volunteers from around the world arrived to join the International Brigades to fight for the Republic against Franco, and many gave their lives for their democratic (and socialist, communist or anarchist) ideals. The Civil War inspired damning works of art - Picasso's Guernica, and a lesser-known woodcut by Heinz Kiwitz (scroll down to it here) - classics of literature (in English) - by Laurie Lee, Hemingway, Orwell, et al - and indelible photographic images, of which Robert Capa's (it's the centenary of his birth this year) are renowned, including his Republican Soldiers Playing Chess of November 1936.

But, sadly for democracy, and Spain, Franco prevailed, and in a brief period during February 1939 half a million Republican refugees fled across the Pyrenees into France. Male combatants were interned in camps such as Gurs near the town of Pau in south west France - over 27,000 of them, held there from April 1939 until May 1940. When war with Germany was declared they were joined in the camp, and then displaced, by the "undesirables": German women married to Frenchmen, communists and trade union militants, supposedly "the enemy within".  And then, in the four "années noires" of German occupation until 1944, it was the turn of the Jews, foreign and French, rounded up by the Vichy regime which connived in sending 4,000 of them to Nazi extermination camps.

"Gurs" said Louis Aragon, the French poet, communist and résistant, sounded like "a sob stuck in the throat".

The camp was makeshift and shoddy, cold and wet, barely fit for human habitation, bereft of the most basic amenities: tables, chairs, heating, lights... Otherwise the greatest challenge for the Spanish, and subsequent, internees was boredom: what to do to pass the uncertain, interminable and empty hours. Ingenuity and creativity produced many solutions: fashioning furniture from scavenged wood and barbed wire; organising tutorials and classes; making entertainment; creating craftwork and art - including sculpting symbols and life-size effigies of Republican heroes of the Civil War in clay, washed away when the rains came.
Giodarno Stroppolo was an anti-fascist, Italian by birth though as an adult lived mainly in France, and a veteran of many battles against Franco's right-wing Nationalist rebels. He brought many skills to bear in the camp, having artistic and musical interests, and being good with his hands (for an extended biography see the appendix below).

His legacy, along with some sketches, consisted of model aeroplanes, rings, a small writing table, and other items carved out of bone: a surprising medium perhaps, but it was only later, with general food shortages during the années noires of Vichy and the German occupation, that camp diet, poor as it had been, deteriorated to near starvation levels where meat was unheard of.

The board is 18 x 18cm. The pieces are 4cm high and, made without a lathe, have a square cross-section. As you can see above, and in the composite image below, the Queen is decoratively incised, the King is embellished as if with the appertainances of power, the rook is finely castellated, and the knight haughtily equine - even the humble pawn has attitude, with a knobby pugnacity. So far I have been unable to ascertain how the deep stain on the red pieces was achieved.

Their design hints at other genres of chess sets, but the ensemble is one apart, with an overall stylistic coherence encompassing the board that doubles as a box; and the latter is proud to proclaim the place and year of its manufacture by inscription on the side. 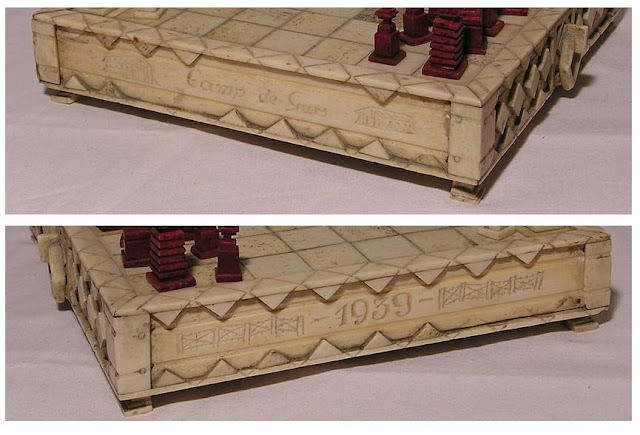 It shows the mean barrack huts of the camp, and the imprisoning fence of barbed wire, and defies the miserable circumstance of its genesis.

But why produce a chess set? To play chess, of course, and Giordano himself could, as far as is known, play the game. But with time on your hands, and the skills at your finger tips, you might be driven to create something that would transcend the forlorn landscape of the camp, that would celebrate the human spirit, and the chess set represents such values: civilised human conduct; respect for one's fellows; rationality to trump bestiality.

But it is also a connection with continuity, for people have played chess as long as anyone can remember. It embodies the past. And it implies a future, or "avenir" in French. And this is the message that Giordano Giovanni Stroppolo's chess set carries, but hidden from view as if it was, at the time, too precious to risk exposure to unsympathetic eyes. It was not displayed even in the Guggenheim exhibition, but it has been generously shown to us by Giordano Giovanni's son. Drawn on paper, and stuck precisely on the underside of the box is an image of hope, to be passed around to lift the spirits of the internees.


As M. Giordano Bruno Stroppolo describes it: the picture, typical of popular images of the period, shows the idealised family (father, mother, son and daughter) looking towards a radiant future, represented here by a luminous sun.

In the pantheon of remarkable chess sets this one surely has a prominent place.


Acknowledgements
This post would not have been possible without the generous assistance of M. Giordano Bruno Stroppolo and the Amicale du Camps de Gurs. It also draws heavily on Gurs: L'Art Derrière les Barbelés (1939-1944) by Claude Leharie (published by Atlantica, Biarritz in 2007). Thanks to them all.

Résumé of the life of Giordano Giovanno Stroppolo, based on biographical notes kindly provided by Giordano Bruno Stroppolo.

Giordano Stroppolo was Italian by birth (in 1906), but spent WW1 with his parents and siblings in the States. They came back to Italy, where Giordano was already getting into trouble with the police and local fascists by the age of 15. To find work his father took him to France in 1921, where eventually he stayed, taking various skilled jobs in the construction industry. During the 20s and 30s he was developing his artistic side (first prize in clarinet, a course in drawing at the Beaux Arts, sculpting in clay) and also his political interests (political poems, commentaries on Lenin, learning Esperanto) while mixing with Trotskyists and anarchists. As Giordano approached his 30th birthday Franco launched the coup, and he joined the Garibaldi battalion of the 12th International Brigade.

He fought in the major battles of the Civil War, sustaining wounds at Casa del Campo. After the retreat, during his internment in Gurs his  pre-war comrades maintained contact and visited him. In the camp he produced a number of sketches, and artefacts in bone, including his chess set.  He was released, engaged in a Foreign Workers Regiment (paid labour to build German fortifications), and eventually found himself in Paris. In 1942 (the year that the Germans occupied the whole of France) he was again arrested and interned at the behest of the German authorities because of his Civil War record. After time in Tourelle Prison (where he mutinied) and Rouillé Camp, he was transferred to Voves Camp from which he escaped by tunneling 150 metres, with 40 comrades, in May 1944 in time to participate in the Liberation of Paris with the Italian partisans of the Resistance – and was wounded again. He was then editor of the Resistance weekly “La Voix du Jeune Italian” published in Paris. By 1945 he had joined the Communist Party, and after the war served on the Secretariat of the Centre d'action et de défense des immigrés which, after its war-time role of co-ordinating foreign resistance groups in France, turned to campaigning for civil rights for immigrants, many of whom had fought for the country's liberation.

He married Pia Salati in 1950, having a son (Giordano Bruno) and a daughter (Barbara), and continued to live and work in France post-war, in building and reconstruction, mainly in Normandy, but also in Paris. He had put a break on his political activities, but not his political interests which continued up to his untimely death in 1958 consequent on cancer of the jaw.

Chess in Art Index, see in particular this related post.
See Chess in Art en Guerre 2 here
Posted by Martin Smith at 11:00 am