Ray's response, in the Spectator, to the 9/11 attacks was to write a column, Towers Remembered, in the issue for 22 September 2001, annotating the game Anand-Kasparov, the thirteenth in their 1995 match for the world championship, which took place in one of the subsequently demolished towers.

Below (taken from accessmylibrary.com since we do not have the original) are the annotations in that piece.

The editor of the Spectator in 2001 was one Boris Johnson. 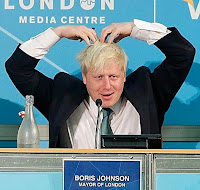 Johnson, we must assume, was unaware that practically the same piece had already been published under the previous editor, in a piece called Dragon's Fire, which had appeared in the issue for 13 December 1997. 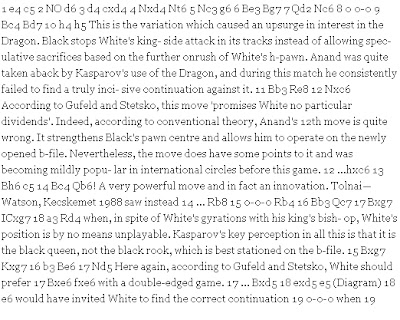 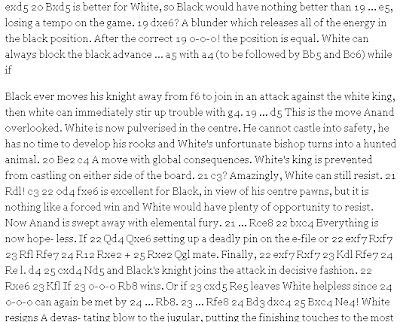 The Spectator's own archived copy appears to run out of space before the end, so we cannot see if it gets as far as ...by 28 ... Qf2 or 28 ... Ng3. But my bet would be that it is in the original, for I can already see half-a-dozen notes in the 1997 piece that are identically-worded to those in the 2001 version.

The editor of the Spectator in 1997 was one Frank Johnson. 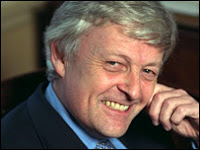 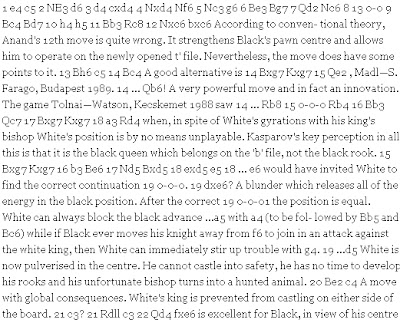 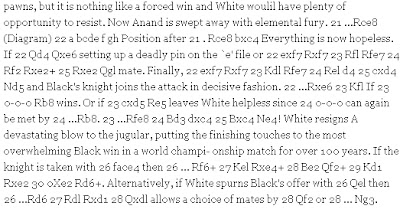 The editor of the Spectator in 1995 was one Dominic Lawson.

Lawson, we must assume, was unaware that practically the same notes were shortly to be published in a book on the match written by one Raymond Keene. 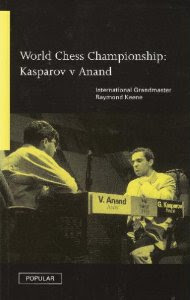 In that book the game notes appear on pages 89-93. 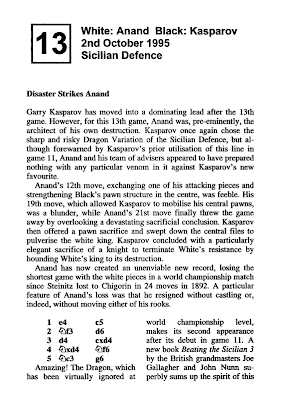 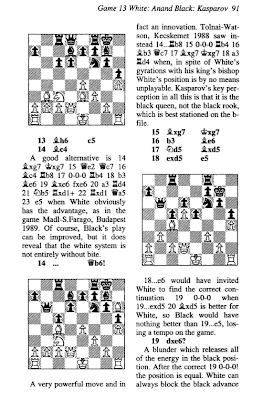 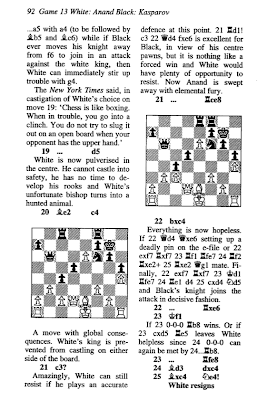 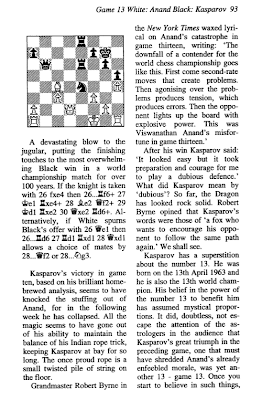 We don't actually have page 90 available to us (though Amazon's Search Inside function will happily locate the notes to Black's twelfth) but we have, I think, everything else, from A very powerful move to allows a choice of mates by 28...Qf2 or 28...Ng3.

There's not a lot to say about all this recycling of notes that hasn't been said before, except perhaps that we can now identify five different Spectator editors - Lawson, the two Johnsons, D'Ancona and Nelson - under whom this has been going on.

Still, one might with more generosity reflect that this is how Ray responded to 9/11 - by carrying on as he normally does. Business as usual.

More recent than the three editors listed here: Matthew D'Ancona and Fraser Nelson, who has been in charge while most of this has been going on. In all cases, of course, there are more examples than the one listed here.