Reading yesterday's post, our more attentive readers will surely have spotted that in one place - if perhaps only one - Ray's notes to Keene-Janetschek are lengthier on chessgames.com than they were on the Spectator: the note to Black's tenth.

So naturally I wondered whether the longer passage was new to chessgames.com. It isn't, though.

It doesn't appear in the Spectator version because it had already appeared in that magazine - the week before, 24 October 1998, when Ray had annotated the Nimzowitsch-Rubinstein game it refers to. The version on chessgames.com is a shorter rendering of the final passage here.

And here are Ray's Spectator notes in full. 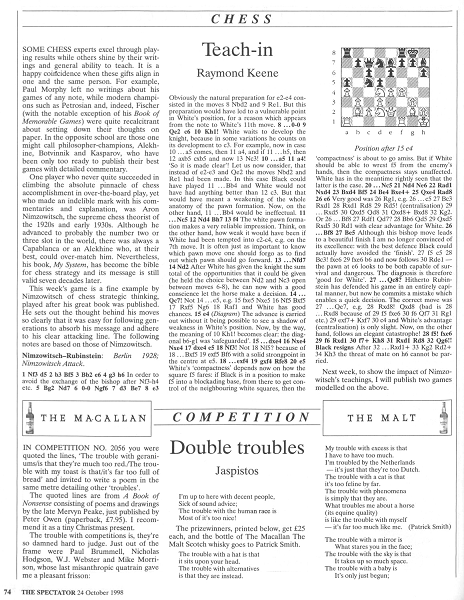 As ever, though, with Ray, clearing up one loose end draws our attention to another. Where, one asks, do these notes come from?

Ray tells us in the column:

This is not entirely untrue, as far as it goes. Unfortunately it does not go so far as to tell us that the notes - as so often when Ray offers us Nimzowitsch - were taken from Reappraisal. 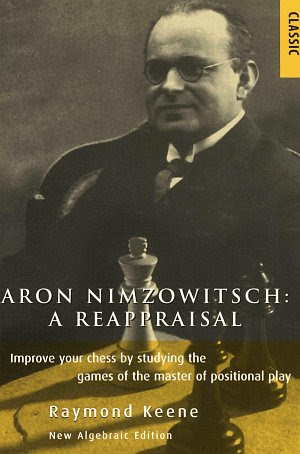 On this occasion I won't bore you by dragging you through all the notes to prove it, but here's some examples. You'll recognise both the snippets from Reappraisal below from the Spectator snippets above. 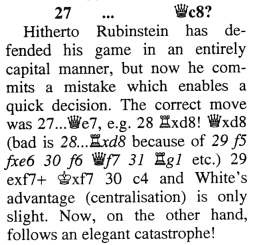 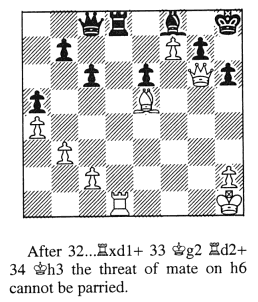 Here's the notes for White's fifteenth, for comparison 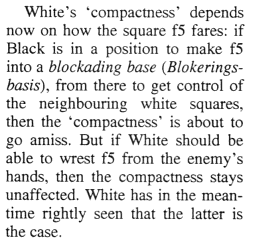 It's all like this - Ray, as on many other occasions got his weekly cheque from the Spectator by copying out something he'd written years before, and deciding that the readers didn't need to be told about it.

But in this case it's not quite copied out. You'll perhaps have noticed that in Reappraisal the term blockading base is in italics, which it is not in the Spectator - and that it's followed by a word in brackets, which is missing entirely from the Spectator.

Why would he leave that out in the Spectator, you might wonder? Or, if you prefer, why, in Reappraisal, is it present in the first place?

The reason that the little snippet is missing from the Spectator is that the notes aren't Ray's at all, even if he were to admit that they're copied out from Reappraisal, which he doesn't.

They're not "based on" Nimzowitsch. They're by Nimzowitsch. So when Ray writes "I am no longer convinced" in the note to White's twenty-seventh 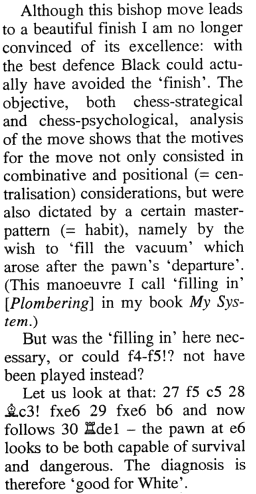 Even Ray hasn't yet claimed to be the author of My System.

But there's more. If you've not already consulted Nimzowitsch-Rubinstein in your own copy of Reappraisal (and it really is a book worth having) then you might like to employ the Look Inside function on Amazon.co.uk and search for Botterill. There should be two hits and it should be possible to view the page for the second, the relevant part of which will look like this. 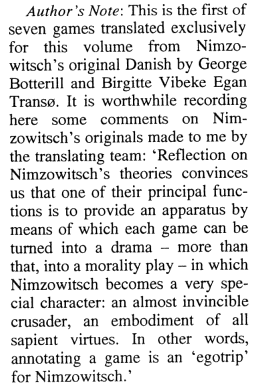 The notes aren't simply by Nimzowitsch. They're by Nimzowitsch in a translation provided by George Botterill and Birgitte Vibeke Egan Transø. (And - although it's only the smallest of snippets - it's also their translation which appears when the game is referenced in Keene-Janetschek on chessgames.com.)

Ray kind of forgot to credit them in the Spectator, though. Which is why he left out the original word and the italics. Because he didn't forget accidentally.

In the absence of any credit, that's another little bit of plagiarism.

Well, that issue came out fifteen years ago now, and we know very well that the Spectator is unscrupulous about what it publishes.

Still, chessgames.com is current, it is on the internet and it is therefore easy to amend. So surely while they are getting round to amending the page for Keene-Janetschek to reflect the true origin of the notes, they will also want to mention that the inserted reference to Nimzowitsch-Rubinstein is taken from Nimzowitsch's own notes as translated by George Botterill and Birgitte Vibeke Egan Transø in Reappraisal.

I mean they've no problem with crediting Reappraisal: they did so with Mannheimer-Nimzowitsch.

As it stands, though, it's just another shabby episode in the long and shabby history of Ray Keene. Or, in this instance, several shabby episodes.

I wondered, though, looking at the observation that the since-uncredited "translating team" made to Ray about Nimzowitsch's annotations -

- if annotating was an ego-trip for Nimzowitsch, what has spending thirty years cheating with your annotations been for Raymond Keene?

[Thanks to Pablo Byrne]

[Plagiarised by Ray index]
[Ray Keene index]
Posted by ejh at 8:05 am