We're taking a break from our Brixton Byways this weekend, but if you're at a loose end on Sunday morning you might like to take a stroll across Clapham (or take a number 37) to Putney in time for 11am or so.

Why might you do such a thing? Because Brandelhow Primary School (Brandlehow Road, Putney, enter from Skelgill Road) is holding a school fête with cup cakes available at four for a quid. And aside from the edibles they're hosting a simultaneous display to be given by three-times British champion and author of Chess for Zebras, Dr Jonathan Rowson. 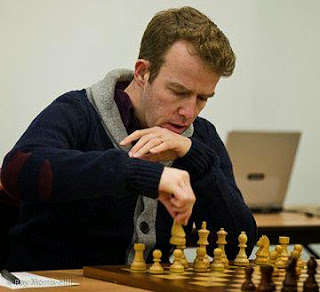 It's a twenty-four board simul, but more players than that should be able to take part given the likelihood of some swift finishes early on. Price not yet settled but probably £7 an adult and £4 a child or £10 for both. All proceeds to the school.

The event goes on until 2pm but do try to get there on time if you want to play - first come, first served. Nearest Tube is East Putney (District Line) and nearest overground Putney.

Here's hoping for a good turnout and a successful simul - and hopefully no backache afterwards. And whether it matters if you take the black pieces or the white ones - I have no idea. You'll have to ask the man himself. [UPDATE: see below!] 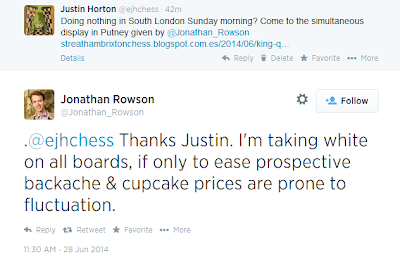 [Image: Peter Kiefer/Coherent Times]
Posted by ejh at 9:55 am