As regular and recent readers of this blog will know, two particular interests of ours are plagiarism and dodgy chess/dementia research.

Today we get to combine the two in looking at an article entitled Checkmating Alzheimer's Disease written by a gentleman named Michael Ciamarra. It appeared on Chessbase on 20 May last year.

I say "article" but perhaps I should say "articles" since the same piece, under the same title, had already appeared on the FIDE site on 14 May of the same year, not that the Chessbase article acknowledges that. Mind you, the FIDE piece doesn't tell you that it had already appeared on Alabama Local News, on May 9, with the slightly more cumbersome title of Mind sports could help older adults improve cognitive performance and reduce the risk of Alzheimer's.

Still, what is of especial interest isn't how much these three articles resemble one another, but how much parts of them resembled other articles, by other people.

Take these two passages for instance.

The latest data underscore the need for an urgent global response, including a strong investment in research, to stop the emerging Alzheimer's crisis.

These come from two paragraphs in the Chessbase/FIDE/Alabama Local News piece. (Let's call it Ciamarra, for short, even though much of it isn't Ciamarra.) We reproduce below the relevant bits.

You will also find both passages in a single paragraph on the website of US Against Alzheimer's, which we reproduce below.

The passage has been split and put into two different places, but it's been plagiarised word-for-word.

Similarly with the section below.

If we start at "a very important step", like so


a very important step toward the most dramatic breakthroughs in human health. Brain research is vital for Autism, Alzheimer’s, epilepsy, Parkinson's, traumatic brain injury, mental health, and a host of other concerns.

we have an exact copy of a passage in a press release by former US Presidential Candidate Newt Gingrich.

But Ciamarra makes no mention of Gingrich. How very forgetful of him.

to wit the words "Healthy Living", which can be found in the passage as it originally appears, on the the Chess Nut Blog, website of Adam Porth.

A small omission. Forgetting to mention Mr Porth or his site is, you may feel, a rather larger omission.

But the jewel in the plagiarist's crown is the very long section that follows.

With certain alterations, this is from an article called Does playing chess prevent Alzheimer's? written by one Andrea Gallagher for Thousand Oaks Acorn. 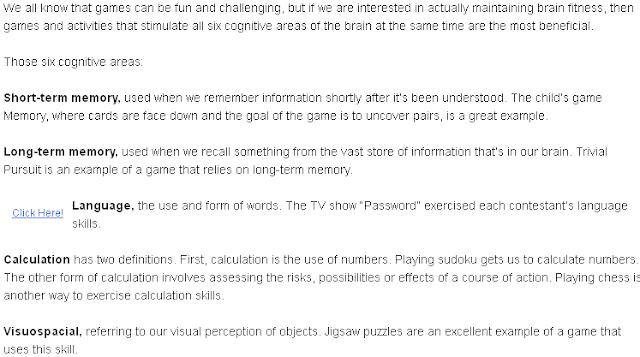 I'd like to look at those "certain alternations" because I think they illustrate a point that's worth making about all the dubious research Jonathan has been looking at on this site. Because you may be thinking along the lines of yes, of course this is plagiarism, but so what, this is some obscure article by some guy I've never heard of and will never hear of again, and if you're telling me Chessbase and FIDE have no particular standards then you're telling me something I already knew.

OK. Well the point to be made is this. Let us suppose that instead of passing off somebody else's work as his own, Ciamarra said whose it was and linked to it.

If he did this:

(a) you could look at it, and evaluate it ;
(b) he couldn't change it to suit himself.

Changing it to suit himself is exactly what he's done.

Here's what Ciamarra has left out.

The child's game Memory, where cards are face down and the goal of the game is to uncover pairs, is a great example.
Trivial Pursuit is an example of a game that relies on long-term memory.
The TV show "Password" exercised each contestant's language skills.
Playing sudoku gets us to calculate numbers.
Jigsaw puzzles are an excellent example of a game that uses this skill.
The game of Risk challenges us to use our critical-thinking skills.

Here's what Ciamarra left in:

Playing chess is another way to exercise calculation skills.

So somebody else's piece, which recommends all sorts of games (board games, cards, TV shows, jigsaws) magically becomes simply about chess.

This is an extraordinary way to go about one's business. What it entails is somebody deliberately amending previously-published work*, and hiding the fact that he's done so, in order to skew what it says to his own advantage.

What a way to behave.

And that, ladies and gentlemen, is why we have proper standards in research, and why we do not go about tweaking, altering, plagiarising and misrepresenting other people's work, and generally saying whatever suits us.

But back to Ciamarra, and his conclusion. It's fair to say that Ciamarra does mention some other games at this stage.

This is the borrowed section.


The day may not be far off when doctors recommend a game of chess along with the physical exercise and a healthy diet for older adults!

It's borrowed from the familiar-to-blog-readers Professor Verghese, which information Mr Ciamarra has, again, helpfully excised from his piece, which is written as if the claim was original to Ciamarra himself.

but of course it may have been taken from any number of places where Verghese's statement has been reproduced and I like to think it was this one.

But perhaps it wasn't. Perhaps it was whipped from somewhere else instead. Perhaps Mr Ciamarra (who failed to respond to enquiries about the piece) might like to tell us where. He has at any rate a lot of explaining to do.

[* As it happens the original article doesn't constitute a serious piece of research, but very obviously, we should be able to see it so that we can judge that for ourselves.]

[Chess and Dementia index]
Posted by ejh at 7:55 am

I read the entire article but failed to see a single mention of Ray Keene. (Except in the sidebar.) What am I missing?