We've been talking a lot about chess and research recently. So on the face of it there's every reason to welcome the appearance of a new academic journal, The Journal of Chess Research 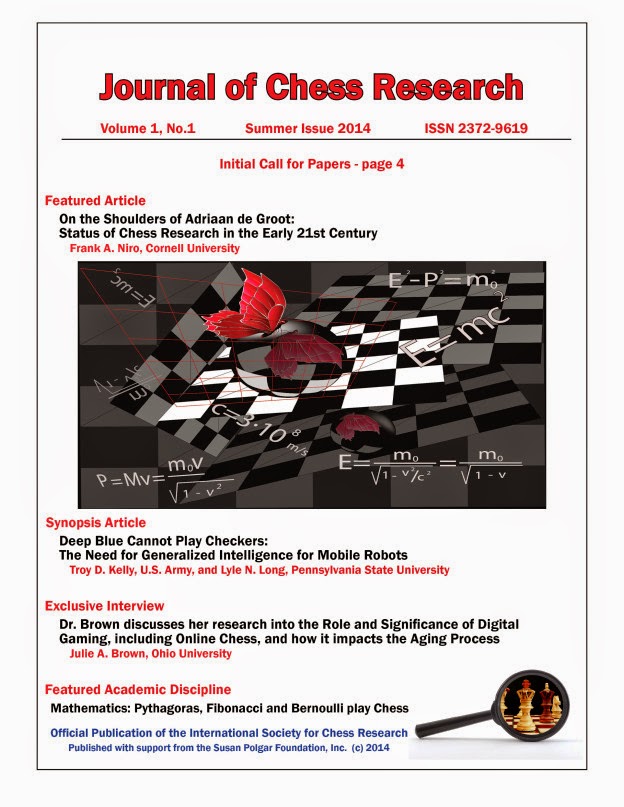 which all being well, will be coming out early next month.

So who's responsible for bringing us this publication?

Well, biting back our disappointment for a moment, what's the journal all about? The call for manuscripts tells us:

Chess and Alzheimer's Disease. OK. At least it's not just that, anyway.

There was a long announcement last week on a website you may have seen before. It presented the Editorial Board of the new journal*: 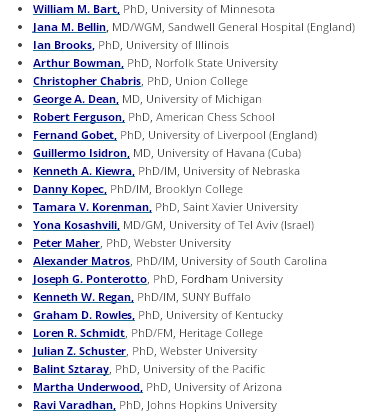 Impressive list of names, no question. And the Advisory Board too:

But not quite all.

Now leaving aside the implications of that particular name for a very brief moment, one's eyebrows really ought to be raised if a prominent member - whoever they are - of the Advisory Board of what hopes to be considered a proper academic journal happens to be the same individual whose Foundation is funding the thing. Because that way the journal kind of lacks independence, doesn't it?

But how "prominent"? Well, the Managing Editor of the journal is one Frank Niro.

When I emailed Frank** about the journal last month, his replies to me were, to my initial suprise, copied to Susan Polgar. Not to any of the other names of the Advisory Board, but to Susan Polgar. Also to Joseph Ponterotto, to whom I'd sent my orignal enquiry - and to Paul Truong, who is Susan Polgar's husband.

So from the outside, this looks a little like a Susan Polgar production. Funded and organised by Susan Polgar.

What's the function of the Journal of Chess Research? Let's ask the International Society for Chess Research of which Frank Niro is President (and at which Paul Truong is in charge of Publisher Liaison). 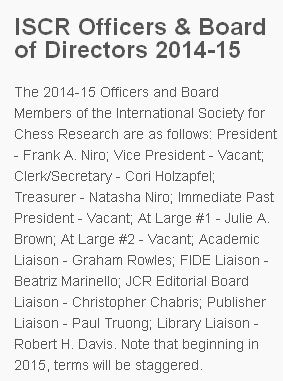 It says, in its mission statement: 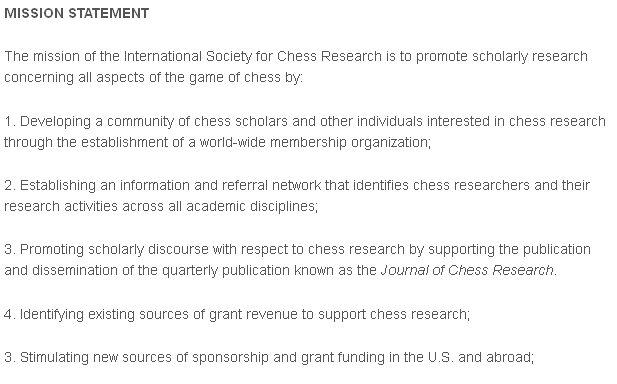 of which the last two (rather unfortunately mis-numbered) items stand out.

In other words, getting money for chess research. Which in principle is a perfectly proper goal.

But it's a bit less perfectly proper if the possible beneficiaries of "grant revenue", or "sponsorship" might be, say, Susan Polgar, or the Susan Polgar Foundation.

This probably doesn't need explaining, because really it's quite simple. It's a manifest conflict of interest. Briefly and in bold:


Academic research is supposed to be independent. It cannot be independent if it is carried out under the direct control of people who may stand to gain financially from its results. Any such research is inevitably tainted and suspect.

- it's not proper academic research. End of story. Simple as that.

So as it stands, the journal is a crock. Simple as that. No matter how many prestigious names are attached to it.


One fresh example while we're at it. One popular piece of tripe chess research, which only gets mentioned on this blog about once a week, is the ludicrous claim that 605 million people play chess on this Earth. (Of course, not irrelevantly to this piece or our recent chess/dementia coverage, the research was perfectly good: it's the claims made about it that are tripe.) Has this turned up on Polgar's site?

The unique brand values attributed to World Chess, coupled with the huge potential audience and blank slate for advertisers, make this a rare opportunity for sponsors and partners to associate themselves with a sport that is played by 605 million of the world's finest minds.

A load of nonsense, but appearing in a PR statement published on Polgar's site as news. Without question, criticism, dissent, clarification or alteration.

That's the sort of thing Susan Polgar publishes, because those are Susan Polgar's standards.

They're not the standards that can possibly, in a million years, be associated with a reputable academic journal.

So by all means have a Journal of Chess Research. No reason not to. It's a perfectly good idea and those are, indeed, impressive names attached to it.

But it can't be anything to do with Susan Polgar.

Because we don't just have a journal funded and apparently organised by somebody with a potential stake in its results. We have somebody who has such a demonstrably disinterested attitude to factual accuracy that she has no business being anywhere near an academic journal in the first place.

[* The list has been updated since the announcement was made.]
[** I should say that Frank was extremely helpful and no criticism of him is intended in any way.]