I'm not proposing to write much about the FIDE Presidential election - just thinking about it brings on a wave of nausea - but there were a couple of things about the ECF statement supporting Kasparov that I have just sufficient enthusiasm to spend five minutes on.

Most of the statement is unexceptional enough - what it says against Kirsan is substantially true, what it says in favour of Kasparov is often nonsense, but that's pretty much par for the course, and as I say, I really don't have the heart to go through the document ticking off what I agree with and
taking issue with what I don't.

However, this little passage intrigued me.

Now I'm a little curious as to how the statement was actually written and by whom. (It's hard to put one's finger on it, but there's something strange about the English in places, such as the lapse into the present tense in the sentence before the passage above.) But that's not particularly important. What I was really wondering about was this "political neutrality" which is apparently "expected by the FIDE Statutes" and is so important to the ECF.

I ask because there is surely no more politically-engaged figure in the entire world of international chess than Garry Kasparov.

It's not something he makes a secret of, either. His Twitter feed is full of politics. He's a political activist. Politics is what he does. 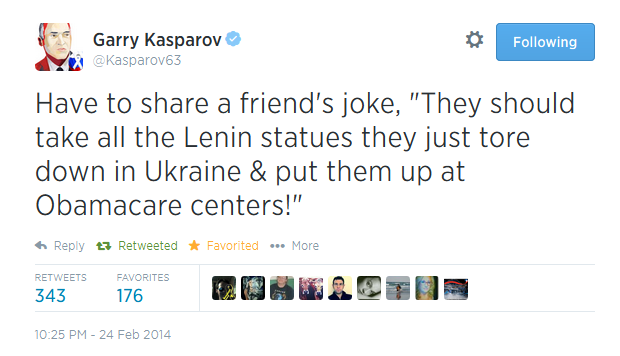 He also does comedy

Specifically, he's a political activist on the American neo-conservative Right. He's a considerable figure in that movement. He gave this year's Keynote Address at the Milton Friedman Prize Dinner at the Cato Institute.

All of which is fine. It's obviously not the viewpoint of the present writer, but it's all stuff Garry Kasparov is completely entitled to do.

But does anybody, for a single second, believe that his outlook and his activities are in any way compatible with the "political neutrality" which is apparently "expected by the FIDE Statutes? Is there anybody less likely to take that particular approach, in that particular post, than Garry Kasparov? Where the statement talks, quite reasonably, of Kirsan "inserting FIDE into one side of international conflicts" is it remotely conceivable that Kasparov would do anything else?

Of course it isn't. So of course it's absurd to talk of "political neutrality" in a statement issued in support of somebody who would never in a million years be able to maintain that stance.

This is so obvious, it takes a real effort not to see it.

But that's what English chess has always been good at, both where Garry Kasparov is concerned and where he is not. Not seeing what it suits us not to see.
Posted by ejh at 7:55 am

Now this I agree with. Obviously the merits of his candidature are puffed by his supporters, although this is hardly unpredecedented in an election.

The only real case for wanting Kasparov is that it might attract mainstream sponsors and media into chess, at least for a while. Also, since Kasparov would never last as long as Kirsan has, being also very divisive, and he would have no obvious number two, the way would be clear in the reasonably near future for a genuinely good Presidential candidate to think that he has a fair chance of winning and put his hat in the ring. At least, it might happen.

Mind you, even that is good enough for me, when compared with the alternative.

Mind you, even that is good enough for me, when compared with the alternative .

"Isn’t Kirsan" is an extremely good reason for voting GK, I’d say. Whatever his shortcomings might be.

It’s quite something that in a two horse race the candidate who has demonstrated a willingness to cite 'scientific research' that simply doesn’t exist - and neither retract nor apologise when called on it - is by far the least unimpressive contender.

I was going to do a post on not-Kirsan as a voting strategy, until the above-mentioned nausea overtook me. Anyway I was going to say that I had no problem whatsoever with the idea.

It's the talking nonsense about Kasparov that bothers me. And even that doesn't bother me nearly as much as the cheating and bullying by some of his supporters.

One thing I am "a little" (actually very) surprised about is the general (ie not just here) lack of discussion on Nigel Short's scathing comments on how untrustworthy Kasparov is in Dominic Lawson's book "The Inner Game". It is quite a transformation to being cheerleader in chief.

Were you intending to focus on John Roycroft's curious letter in the latest NIC on accounts for the Kasparov-Short match? I noticed Short chose to ignore your mention of it in the thread on the ECForum, ironically only to later lambast Nick Faulks for evading a question later on in the same discussion.

I'd focus on it if I had any idea what it was about. Any information would be gratefully received. (Post here, or email to chesscomments@gmail.com if you prefer.)

I think it's no secret that most of the best friends in FIDE politics used to be at loggerheads and most of those who are currently enemies used to be friends. It's just that it suits nobody to say so.