But I knew the line of the Slav that Nigel intended to play: I had seen him and Kavalek spend a week’s work on it back in Reston, Virginia. It was the variation Kavalek had described as 'good rope-a-dope stuff'. Far from challenging Kasparov with the sharpest and latest line in the opening, Nigel was relying on a move which had once been played by the ex-world champion Vassily Smyslov in 1953. Smyslov, the most extraordinary example of longevity at the top levels of grandmasterdom, then gave the move a rest for forty years, only to play it again this year in an obscure tournament in Rostov-on-Don. I remember Nigel’s excitement as Kavalek’s computer - the Beast in his basement - spewed out the Rostov-on-Don game by the Rip Van Winkle of world championship chess: "If Vassily Smyslov thinks that the move is still good after forty years' thought, then it’s good enough for me."

Last week’s Doctor Garry (Dogs That Don’t Bark) showed that a journal article - Leisure Activities and the Risk of Dementia in the Elderly Verghese et al. (NEJM 2003 348:2508-2516) - which is cited all over the place as the 'proof' that chess is an effective intervention to counter dementia actually contains no mention of chess whatsoever. The closest it gets, as we know, is a reference to people "playing board games or cards".

As it happens, the New England Journal of Medicine article is not the only study that makes use of the the data obtained from the Bronx Ageing Study. No doubt there are many others. The one that interests us today is,


You may recognise the final author listed, maybe all six of them, since every one is credited as an author of Leisure Activities...  (albeit, as Andrew Preview might have it, not necessarily in the same order).

The same group of researchers making use of the same data set investigating a similar topic. The difference? The NEJM 2003 article asks a group of people about their leisure activities and then looks forwards to see which of them develop dementia. The Neurology 2009 paper goes the other way, taking the group of people who developed dementia and then looking backwards to the start of the research project to examine what those people said they liked to do in their leisure time.

The point for today is that the categories listed for cognitive leisure activities in the second article - "reading, writing, crossword puzzles, board or card games, group discussions or playing music" (p. 357) - are the same as in the first. Yes, that's 'board or card games' again, not 'chess'. 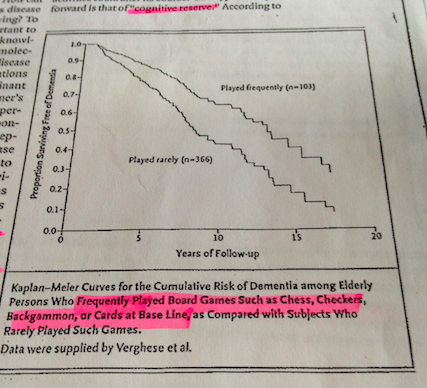 We know from last time that 'board games' means "board games such as chess, checkers, backgammon". We know that if the data had justified the use of "chess" rather than "board games" then the researchers could have used that word in 2003. We also know that the authors repeated their choice not to do so in 2009.

Are the two terms interchangeable for the purposes of this discussion? I think not. That’s being kind. 'Obviously not', would be a more appropriate retort. There are any number of reasons to come to that conclusion, but aside from anything else, if Hall, Lipton, Sliwinski, Katz, Derby and our friend Verghese still thought that 'board games’ was the correct wording after six years' thought then it should be good enough for us.

If anyone is thinking of reviving a Nigel Short game of over twenty years ago, there's a later improvement for White, based on a Kasparov comment,in a game by Gelfand which seems to leave White somewhat better.

I'm not sure the relevance of a dodgy line in the Slav to medical research.

There’s none Roger. It’s more Short’s comment in the last line of the passage that I quoted.

"If Vassily Smyslov thinks that the move is still good after forty years' thought, then it’s good enough for me."


On the chess aspect, Lawson’s book gives a reason why Short didn't play ... Qa5 again in the match: Speelman and Hubner found something very strong against it.

Curiously, though, The Nosh did repeat ... Qa5 a couple of years later at Linares. Against Beliavsky who was one of Gazza’s seconds in London.

I always wondered if Short was curious as to what Kasparov’s team had found against the line or whether he thought Beliavsky wouldn’t be able to use anything discovered while working for The Boss.